University of Wisconsin System Board of Regents October Meeting, Day One News Summary

STEVENS POINT, Wis. – The University of Wisconsin System Board of Regents today unanimously approved a System report on the Program Revenue Fund Balances managed by the campuses and institutions within the UW System.

The report, which was presented during the Board’s meeting at UW-Stevens Point, is the result of a collaborative effort between the campuses, UW System and the legislature to better define and manage the fund balances held and managed by institutions and campuses within UW System. The 250-page report identifies the fund balances using definitions provided by the Legislative Audit Bureau and provides detailed analysis of each fund by campus, including how the funds are generated, how they are being managed, and how they are planned to be spent.

“We have been responsive to what our Board of Regents, our legislators, and the public told us they wanted. The UW System has delivered, “said UW System President Ray Cross, who presented the report to the board.

“This report is a significant step forward,” said Regent President Michael J. Falbo. “We listened to the concerns expressed by the legislature and the public, we acknowledged the need to make improvements, and we have worked hard to strengthen the transparency and accountability of our budgeting and financial planning processes. There is still work to do, but we are well on our way.”

“I think this is absolutely the healthiest thing that could have happened, and I think we’re all ready to defend it,” said Regent Margaret Farrow. “But I think people should understand the blood, sweat, and effort that went into it.” 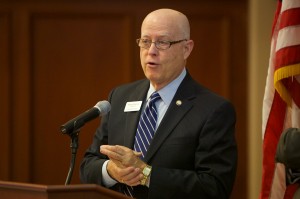 Chancellor Bernie Patterson addresses the Board.
Chancellor Bernie L. Patterson told the Board of Regents Thursday that UW-Stevens Point is emerging as a new kind of public university – a university more engaged with area stakeholders, more responsive to local needs, and more relevant to solving regional problems.

UW-Stevens Point is making a point

Drawing on the university’s strategic plan, A Partnership for Thriving Communities, Patterson led a presentation highlighting four university and business relationships that make life in Central and Northern Wisconsin more vibrant, healthy, prosperous and sustainable. From creating new products and markets in the paper industry, to the growing field of aquaponics, from internationally known visiting artists to nanotechnology, these university collaborations enhance the lives of Wisconsinites in meaningful ways, Patterson said.

“Our pledge as a university is to be more responsive to community needs and more relevant to community issues,” Patterson said.

Aaron Brower, interim chancellor of UW Colleges and UW-Extension, updated Regents on the Flex Option program.  He reported that in early September, the U.S. Department of Education approved UW Colleges to make federal financial aid available to eligible students in the Associate of Arts and Science degree in the Flex format.  UW Colleges is the first institution in the country approved to award aid on the basis of non-term direct assessment.

David J. Ward, interim senior vice president for academic & student affairs, reported to the Education Committee that there has been an increase in the adoption of the UW System Early Math Placement Tool (EMPT) by high school math teachers following a letter from President Cross and Wisconsin Technical College System President Morna Foy recommending this test in early September. Compared to 2013, there are 27% more teachers, 29% more schools, 53% more classrooms, and 22% more students registered. 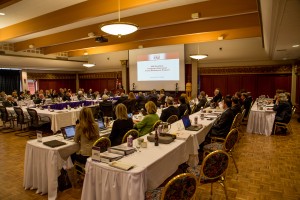 President Cross addresses the Board.

The EMPT helps to identify strengths and weaknesses of students so they can be better prepared for math in college.

Ward also reported on the systemwide implementation of the Universal Credit Transfer Agreement approved by the Board of Regents last June. He said data shows that students are successfully using the increased opportunity to transfer both from WTCS and UW System institutions. He noted that an advisory team consisting of members from WTCS and UW System campuses meets regularly to maintain, review, and assess the agreement and its implementation. Ward will travel to meet with tribal college leaders in Wisconsin this fall in order to collaborate on the possible extension of the agreement to tribal college transfer students.

In other action, the Education Committee:

The Business and Finance Committee received a report on additional compensation received by UW System faculty and staff outside the state-approved pay plan.

A total of about 29% of all staff received base adjustments (including those for promotions, title changes, and changes in duties) during fiscal year 2014, according to Senior Associate Vice President Al Crist. UW chancellors reallocated approximately $38 million to fund these base adjustments. By comparison, reallocations of approximately $34 million were made for these purposes in fiscal year 2013. These reallocations represent 2.3% and 1.6% of the respective year’s salary base.

“We need to have a culture change about how we care for our faculty,” said Regent David Walsh.

UW-Stevens Point Business Outreach: Dave Eckmann, the new special assistant to the chancellor for economic development at UWSP, briefed the Committee on campus initiatives in the areas of economic development and business collaboration. Regents also received an update on partnerships and progress resulting from UW System Economic Development Incentive Grant program initiatives under way in the areas of paper science, sustainable biotechnologies, and innovation in the aquaculture and aquaponics industries.

The UW-Oshkosh request increases the budget of the Fletcher Hall Renovation by $5.9 million to complete the project, which was enumerated in 2013-15. The additional costs were caused by inflation that resulted from a two-year delayed schedule and the increased scope of additional space that will allow the campus to maintain the hall’s current bed count. The total cost of the project is $23.5 million in Program Revenue-Supported Borrowing.