STEVENS POINT, Wis. – The University of Wisconsin System Board of Regents for the first time welcomed leaders from the Great Lakes Inter-Tribal Council to its meeting Friday at UW-Stevens Point.

“This is a historic day for UW-Stevens Point and the entire UW System,” said Andy Gokee, director of the Native American Center at UW-Stevens Point. Gokee, a member of the Red Cliff Band of Lake Superior Chippewa, delivered an opening invocation, performed a welcome song for chiefs, and presented ceremonial gifts of tobacco to the visiting tribal leaders.

“We are honored and thankful to be here to begin this partnership with tribal communities,” said Cristina Danforth, chairwoman of the Oneida Tribe and a UW-Green Bay graduate. “We have a saying: you can feed a person but you can also teach them to grow food and fish and be self-sustaining. Education is key to that, to teach people to sustain themselves.”

The meeting was intended to launch efforts to develop a stronger educational partnership between the UW System and the tribal nations of Wisconsin, and to improve Native American student success by promoting more enrollment, retention, and graduation. 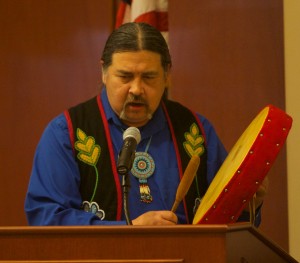 Andy Gokee, director of the Native American Center at UW-Stevens Point and a member of the Red Cliff Band of Lake Superior Chippewa.

Regent President Michael J. Falbo noted the Board’s honor in welcoming the Council leaders, and shared the UW Regents’ interest in building “a strong and productive partnership between us, one that will improve the outlook for Native American students, faculty, and their communities, and benefit all of us.”

“We have shared relationships and shared concerns,” said Danforth, adding that student support – educational, financial, and social – are vital to ensuring greater retention and graduation rates among Native American students.

“Part of your mission statement is to be responsive to groups that have been underserved. Well, that’s us,” said Chairman Mic Isham, of the Lac Courte Oreilles Band of Lake Superior Chippewa Indians. “We’re on the same team.”

“This collaboration has to happen for the success of our students. We should all be working together,” Manydeeds said. 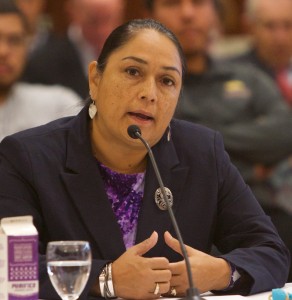 Cristina Danforth, chairwoman of the Oneida Tribe and a UW-Green Bay graduate.

President Cross told the leaders, “You’ve enlightened us with your counsel and your wisdom and you’ve challenged us to work harder to serve you, Wisconsin’s sovereign people. I hope this is just the beginning, the first step.”

The Regents also recognized Dorothy “Dot” Davids, the first Native American graduate of UW-Stevens Point, with a UW System Certificate of Meritorious Achievement for her outstanding service as a life-long educator, advocate, and leader. Davids, who earned her education degree at what was then-called Central State Teachers College in 1945, went on to work 20 years at UW-Extension.

Davids passed away one week ago at the age of 91. Family members accepted the award on her behalf. 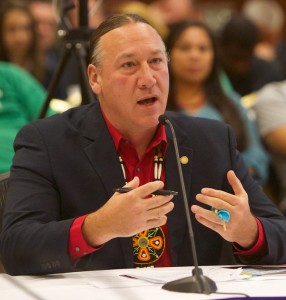 UW-La Crosse Chancellor Joe Gow said the goals are straight-forward: improved access, increased retention, and improved campus climate.  “We want to get to people early and get them thinking about coming to us,” he said. “One thing that really comes through is that it takes a lot of people power and close attention and guidance.”

Chancellor Debbie Ford, whose UW-Parkside campus is the most diverse in the UW System, told Regents about the Rangers in Action program, which is designed to recognize – and encourage – colleagues who are focused on improving diversity and inclusiveness.

“One of the real challenges to this effort is to inculcate it into the culture of the institution,” said UW-Platteville Chancellor Dennis Shields. “We have to reach out broadly, get people engaged in thinking about these things.”  He said that tracking the achievements of underrepresented minorities can be the “canary in the coal mine” for campuses. “It’s not an add-on, but representative of what you want to achieve with all of your students,” he said.

Shields also urged Regents to consider the question of whether there’s enough effort to attract diverse talent into leadership roles, both at the System and institutional levels. “If we aren’t, that sends a message,” he said.

UW-Whitewater Chancellor Dick Telfer identified four areas that significantly impact the success of students from underrepresented populations: their academic preparation prior to college, financial issues, status as first-generation students, and general difficulties connecting with a campus. He said several programs at UW-Whitewater — Pathway for Success, Summer Business Institute, and the Future Teachers Program – and two scholarship the King/Chavez Scholars Program and the McNair Scholars Program – have produced successful track records in improving retention and graduation rates. “This is the whole campus trying to address these issues,” Telfer said.

“I’m really pleased that we are seriously taking this on,” said Regent Tim Higgins, acknowledging that it will take a continued investment of resources.

As part of his regular report on news from around the UW System, Cross told Regents that the Materials Science Center at UW-Eau Claire is continuing to grow with the help of over half a million dollars in grant funding in the last few months. Grants from the WiSys Technology Foundation, American Chemical Society, and over $460,000 from the National Science Foundation have funded a brand new 3-D imaging laser scanning microscope and added capacity for faculty-student research.

Montelongo, of the Ho-Chunk Nation and a member of the American Indians Reaching for Opportunities (AIRO) organization, is raising two children while earning her degree. “Since I’ve been in school, I have missed some of our traditional doings, but I only do it because education is so important,” she said. She is closely involved with organizing events like UWSP’s annual pow-wow to ensure that the Native American culture is represented on campus.

Calvin, a Milwaukee-native, serves as President of the Black Student Union and the Lincoln Hills Poetry Club. She also works as the student diversity assistant for the Admissions Office, and an employment recognition coordinator in the Student Involvement and Employment Office. “My main goal is to make sure other students get the same opportunities as I’ve been given,” she said.

The University of Wisconsin System Board of Regents will hold their next meeting
on November 6, 2014, in Van Hise Hall, Madison.