The Board of Regents this month engaged student leaders in a discussion about priorities for the upcoming 2009-11 biennial budget. The Board will consider a full biennial budget proposal at its August meeting.

“The theme of all of our priorities is state support for the UW System,” said Ray French, president of the UW-Eau Claire student government and member of the UW System Student Representatives Council. 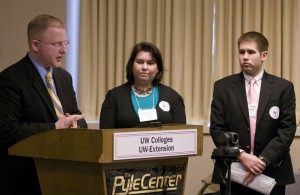 Among the items identified by the students, and supported by the Regents, was the need for increased state investment in financial aid.

“We cannot achieve the growth that Wisconsin requires without an increased commitment from the state in the area of financial aid,” said UW System President Kevin P. Reilly.

“Students are paying far more than their far share and it’s time for the state to step up,” added Cristina Trevino-Murphy a student at UW-Madison and a member of the United Council of Students.

Associate Vice President Freda Harris presented UW System’s proposal for the 2009-11 biennial budget – one that would ensure that needy students are held harmless against future tuition increases. Harris explained that while state funding has increased by an average of 13 percent each year, the real dollar increases have not kept pace with tuition costs.

“Even with the added investment Wisconsin has made in recent years, we are still classified as a ‘low-aid’ state,” said Reilly, adding that Minnesota’s total financial aid expenditures are three times that of Wisconsin’s. “That is a startling fact,” said Reilly.

Students and Regents alike pointed to the uphill battle the UW System will face in the uncertain economic climate.

“The world has changed, our problems haven’t changed, and we need to stay the course,” said Regent David G. Walsh. “It’s mind boggling what we have to do to continue to grow this university system. I hope we don’t lose our initiative.”

“The UW System exists to push the boundaries of education, of research… and what people in the world are capable of,” said Thomas. “I worry about the accessibility factor as we move forward.”

“We need to put this as a high priority — making it affordable for students to attend through a better plan through financial aid,” added Regent Danae Davis.

In addition to advocating for need-based financial aid, other student priorities included:

“I think there is a lot that we agree totally on and we can work together effectively,” said Reilly, speaking of the many areas where students, administrators and Regents share common goals.

“You’ve done what you needed to do,” said Vásquez. “That is to put our feet to the fire.”

“These principles…send a clear message to young students and their parents that college is possible, regardless of their family circumstances, cultural background, or financial resources,” said Reilly. 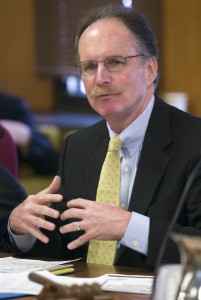 In the same action, the Board directed the UW System to explore the implementation of a private fundraising campaign to supplement, not replace, the need-based financial aid provided by the state and federal governments. Reilly expressed his hope that the campaign would double the UW System’s current levels of privately funded, need-based financial aid, which total about $6 million annually.

“I think it’s extremely doable when you look at an entire state to raise that money,” said Regent Eileen Connolly-Keesler.

A component of the campaign would include a web portal on the UW System website to redirect potential donors to the institutes of their choice.

“We’re thinking of this as a sort of ‘United Way’ model,” explained Reilly. “We’ll launch an ‘umbrella’ campaign statewide to enhance local, campus-based fundraising efforts, and draw attention to the benefits of supporting need-based grants for UW students.”

Details of the campaign are expected for the June meeting.

View a presentation on the 2009-11 Biennial Budget pdf

UW Colleges and UW-Extension Chancellor David Wilson led a presentation to the full board about the growing role of his two institutions in growing local communities.

“Lives are being transformed and the future of our state is being sustained through the work of UW-Extension and UW Colleges,” said Wilson. 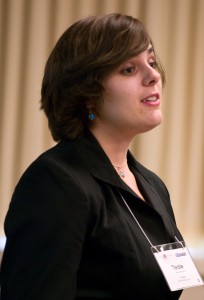 Teale Greylord, a student at UW-Fond du Lac, explained how her pursuit of higher education was a transformative experience.

“I could feel myself growing as a person,” said Greylord about her experiences at UW-Fond du Lac, adding that attending college “was the best experience in my entire life.” 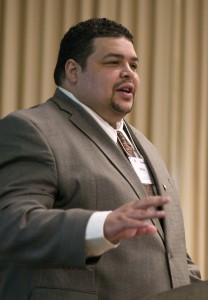 Philly Denís, a graduate student at UW-Madison and first-generation college graduate, started his college career at UW-Richland after a challenging childhood.

“UW Colleges and UW-Richland embraced me and nurtured me as a scholar, a friend, and an individual with dreams,” said Denís.

The Business, Finance, and Audit Committee unanimously approved a proposal by UW-Platteville officials and students to implement a 1.9 percent differential—equal to $100 per year for full-time undergraduate students beginning in fall semester of 2008-09.

The proposal comes as the campus is finding limited resources on retaining students and increasing student employability.

“This, to me, is a mechanism of last resort,” said Mick Viney, assistant chancellor for student services at UW-Platteville. He explained that depleted financial resources led to a number of areas lacking support, including substantial cuts to the school’s mental health services.

If approved by the full board tomorrow, funds generated by the differential would be applied to four areas: student retention activities, mental health services, career services, and support for senior capstone projects through the University Engagement Center at UW-Platteville.

UW-Platteville Student Senate President Frank Moullet emphasized the importance of expanding these areas that would “better prepare them for a space in the workplace.”

The initiative was approved by the UW-Platteville Student Senate.

“We really feel that our success is in part dependent upon the services that our available to us,” said Moullet, who added that currently it is difficult for students to receive adequate professional development assistance which includes help translating student experiences into a resume.

The fees will also help hire an additional full-time counselor in the university’s counseling center and a person to staff the University Risk Awareness Team.

“It’s hard to put on more fees,” said Regent Connolly-Keesler, but emphasized that the student support was hard to deny in approving the differential tuition.

An oversight committee with equal representation from students, faculty, and staff will monitor the effectiveness of the program and the use of funds.

“It [tuition initiative] benefits everyone from the first-year student to the graduating student going out into their career,” added Viney.

The Committee unanimously approved a number of policies that would apply to all informational technology projects costing $1 million or more and those considered vital to the functions of the university. The policies are also aimed at meeting a 2007 legislative directive.

The policies include a requirement for the UW System and each UW institution to submit a strategic plan for IT projects to the Board of Regents each year.

Steering committees at both individual institutions and the UW System will also be required to perform routine monitoring of the major projects.

In June, the committee will review six major projects that are in the pre-implementation or discovery phases.

If approved by the full board tomorrow, the policies will be submitted to the Joint Committee on Information Policy and Technology.

The committee also discussed a presentation by UW-Extension Interim Provost and Vice Chancellor Robin Shepard and Brad Karger, deputy county administrator in Marathon County, about the tradition and mission of UW-Extension. 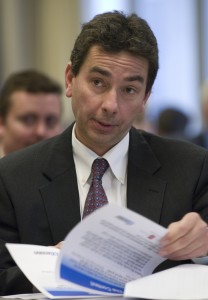 The Education Committee began its meeting with a presentation about the UW Colleges and UW-Extension Adult Student Initiative, designed to help more Wisconsin adults complete degrees. David Schejbal, dean of Continuing Education, Outreach, and E-Learning at UW-Extension, pointed out the importance of this initiative, saying that Wisconsin has dropped to 35th in the country in the number of bachelor-degree holders, down from 30th in 1970.

“Unemployment is rising in these challenging times,” said Schejbal. However, he continued, “The employment rate for those with bachelor’s degrees and over is not expected to rise.”

Schejbal told the committee that since the U-Win campaign launched in 2006, over 3,000 Wisconsin residents have expressed active interest in attaining their degree, and over 300 have enrolled in UW Colleges degree programs. 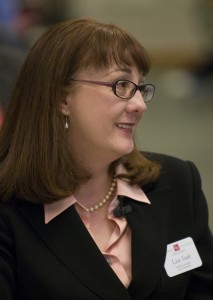 One of the goals of the campaign is to increase awareness of the new opportunities available, including online degree programs and accelerated hybrid courses, which are a combination of face-to-face and online learning in a shorter length than the traditional 16-week semester-long course, said Lisa Seale, interim associate vice chancellor of UW Colleges.

The Committee also heard a presentation on the UW System Engineering Education Task Force, which was charged with formulating recommendations to effectively and efficiently meet the state’s emerging education needs in engineering over the next decade. Dev Venugopalan, task force chair and associate vice chancellor at UW-Milwaukee, told the committee that it found no current unmet demand in the state for engineering graduates and still has capacity in some university programs. However, the task force did find a shortage of women and students of color in engineering programs, which may be tied to a lack of faculty in the same areas.

In other business, the Education Committee

Malcolm Brett, director of broadcasting and media innovations at UW‑Extension, provided the Physical Planning and Funding Committee with an overview of how Wisconsin Public Television could maximize access to educational resources through new digital broadcasting technology. 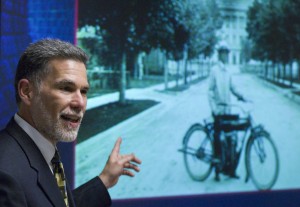 Malcolm Brett, director of broadcasting and media innovations at UW‑Extension

Brett described a multi-year plan to bring the benefits of digital broadcasting to audiences around the state by upgrading the capabilities of Wisconsin Public Television, Wisconsin Public Radio, and the Instructional Communications Systems unit.

Brett explained the urgent need to upgrade technology and replace obsolete, equipment, such as WPT’s 25‑year-old remote production truck.  A new remote truck will allow television crews to travel to all regions of the state to cover large-scale community events and better fulfill WPT’s outreach mission.

He also described the potential of University Place – a new public television and Internet service that enhances the public’s access to university content.  An initiative of public television stations at the University of Wisconsin System, Ohio State, and Penn State, University Place will create a digital archive of university-sponsored lectures, symposia, and other events and will include a library of video “learning objects” for use in schools.  Content will be available by broadcast, streaming online and, in some cases, cable video on demand.

Associate Vice President David Miller reported that the Building Commission approved about $37.4 million of program revenue for projects at its March meeting.

In other business, the Physical Planning and Funding Committee:

The Board of Regents will resume its April 2008 meeting on Friday, April 11, at 9 a.m.
at the Pyle Center in Madison.