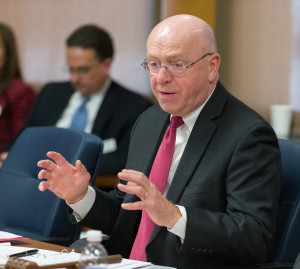 MADISON – University of Wisconsin System President Ray Cross told the Board of Regents Thursday that clearly communicating and explaining the university’s financial situation is his top priority.

“I want everyone in this room to have a basic understanding of our finances. To understand how much money we have, where it is, and where it is spent,” Cross said, in his first appearance before the Board as president.  “We have heard clearly from legislators, the public, and our colleagues within the university that this is important and necessary.”

“You shouldn’t have to be a CPA to have a basic understanding of the university’s finances,” Cross said.

Cross told Regents that the University’s fund balances will now be broken down by institution and according to the classifications identified by the Legislative Audit Bureau. He said early projections of fiscal year fund balances will be presented to the Board at its next meeting in April.

In addition, financial reports including “performance vs. budget” information will now be presented to the Board on a quarterly basis, rather than annually, Cross said. Another significant change, the process of budget development will be revised to include projected actuals and projected year-end cash balances. Previously, the Board was asked to approve an annual budget built almost exclusively from the previous annual budget.

Reiterating the importance of thinking of The Wisconsin Idea as a two-way dialogue between the people of Wisconsin and the UW, Cross told Regents that he plans a state-wide “listening tour” starting later this month.

“In order to really be effective, we need to better understand the needs of people throughout the state,” Cross said. “These people are our neighbors, our friends, we have shared interests. We have a mutual interest in making Wisconsin a better place to live, work and raise a family.”

He identified four areas where he expects to focus attention: strengthening the state’s economy and growing businesses; supporting a seamless pipeline between K-12 and higher education; addressing the special challenges of urban centers and rural areas; and future educational practices.

“In whatever we do, we must always remember that University of Wisconsin needs to also be a University for Wisconsin,” Cross said. 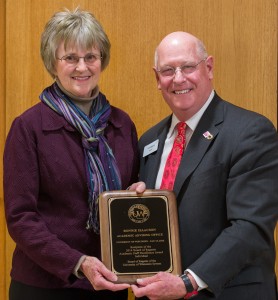 The Regents presented their 2014 Academic Staff Awards for Excellence, honoring two individuals and one program. The awards are the UW System’s highest recognition bestowed on members of its academic staff.

This year’s winners are:

UW System’s academic staff “works so diligently and with such passion, we’ve become accustomed to their level of commitment to our students and their community. Even so, we are determined not to take their efforts for granted,” said Regent Tracy Hribar, chair of the selection committee. She added that the awards provide an opportunity to remember “how important all academic staff are in meeting our educational mission.”

Bonnie Isaacson, a member of the UW-Eau Claire campus community for 23 years, said she draws on her own experience as a first-generation student in her work as UW-Eau Claire’s nontraditional student coordinator. 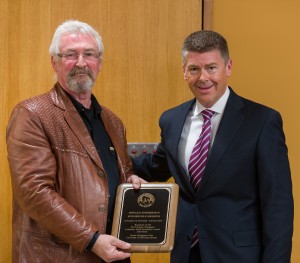 She cited three P’s – purpose, passion and perseverance – as the guiding forces that drive academic staff members to do what they do. “We find purpose in our work, and reason to throw back the covers on a cold, snowy morning,” she said. “We find passion in our work, loving what we do, and knowing we make a difference in people’s lives.” She also noted it sometimes takes perseverance, even amid budget cuts, to continue to find new ways to help students find their own passions. “It all comes back to the fact that I love what I do, serving adult students,” Isaacson said.

Ron Zimmerman was named the first director of UW-Stevens Point’s Schmeeckle Reserve 35 years ago. Since then, he has developed it into a world-class outdoor environmental teaching laboratory and community nature reserve, with broad campus and student support.

“Almost everybody wants to have the recognition that their job is important, and it’s not just a way to make a living. Many of us in the university system have had that opportunity,” Zimmerman said. 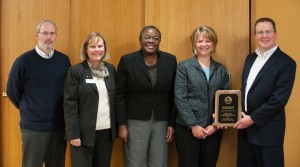 “I was fortunate to operate under the supervision of a lot of people who encouraged me to go beyond what the job description was,” Zimmerman said.  “We all want to be trusted, respected, and to have a little autonomy, to be empowered.”

In accepting the program award on behalf of UW-Stout’s Registration and Records Office, Registrar Scott Correll told Regents that the foundation of his office’s success has been the practice of “hiring for talent and training for skill.”

Over the past three years, the Registration and Records office has undergone a complete transformation to better respond to the changing needs of students, graduates and the public. Streamlining old processes, for example, has cut the turnaround time on sending out diplomas from 45 days to four.

The broad theme for the day was the UW System’s role in economic development and meeting the workforce needs of the state.

Wisconsin’s chief economist told the Regents it’s nearly impossible today to get a good-paying job with just a high school education. In his presentation, “The Economy has Changed,” Dennis Winters, of the Department of Workforce Development, explained that machines have essentially taken over work that was done by people. Fifty years ago, 60% of workers were “unskilled.” Today, Winters says that number has plummeted to 12%.

“If you want to earn $30,000-plus in this state, you have to have some post-secondary education, unless you’re in sales,” said Winters. He explained that Wisconsin can no longer compete on the labor side, so workers must update their skills.

While he called the current economic outlook “positive but subdued,” he said the country’s aging Baby Boomer population will have an increasingly significant impact on the economy as a whole. Winters pointed out that while Wisconsin’s overall population is growing, the size of the workforce has flattened.

“That has never happened before… and it’s not going away,” Winters said. “If the workforce flattens out and you don’t raise the productivity of the workforce, you face an economic stagnation.”

Most available positions today tend to be relatively low-paying jobs in food preparation, customer service and healthcare assistance, he said, though there is demand in nursing, welding and heavy truck driving. For the most part, however, the higher-paying jobs are in the technology sector, where there’s a “scarcity of skilled labor.” Winters said the quality of life in communities is what’s attracting the top talent to particular businesses.

Panel: What Wisconsin employers need from the UW System to be more competitive

A panel discussion on the relationship between universities and Wisconsin businesses was an opportunity to share successes, talk about challenges and present ideas that will benefit both.

Jeff Cernohous, founder, chairman and CTO of Interfacial Solutions in River Falls, spoke of his experience starting his business and hiring employees. Soft skills such as problem solving and team building are invaluable in the business world, Cernohous said, and he encouraged universities to offer more of those types of learning opportunities for students.

“I think there could be more intermixing of business type curriculum with STEM (Science, Technology, Engineering, Math) type curriculum,” Cernohous said. “A lot of times someone going into chemistry or physics doesn’t think about business unless it’s a second major. Curriculum that really looks at the hybridization of business with STEM could be really valuable.” Cernohous, a UW-River Falls alumnus, also talked about successfully recruiting Silicon Valley engineers to his Wisconsin business.

Tom Watson, vice president at Johnson Controls Power Solutions in Milwaukee, spoke about his company’s strong partnership with UW-Milwaukee and how Johnson Controls scientists also serve as adjunct professors who mentor students. “This helps bridge the students into the business world,” Watson said.

“Every engineer has to be a salesperson. They can’t just be sitting in their lab developing an idea,” Watson said. “They have to be able to sell that idea to management and to their customers. They have to be able to wrap a business case around it. One of our scientists working at the UW-Milwaukee research lab may have an idea, but if they can’t sell that idea, it’s going to get lost in hundreds of other ideas that are coming forward.”

Education and innovation are the two main ways universities can help businesses, said Charles Hoslet, associate vice chancellor for government and corporate affairs at the University of Wisconsin–Madison.

“The core mission, of course, of the university is to produce an educated workforce that is needed to build, run and work in the innovation economy,” Hoslet said. “This means educating not only our undergraduate and graduate students but also providing continuing educational opportunities for those already in the workforce.”

“We should look for more opportunities, either in a formal manner like these or informal opportunities, to connect with those employers who are hiring our students and say, what is the skillset that you need us to be developing,” Hoslet said. “What are we missing? What are we not doing well? We should be the ones asking those questions.”

Panel: How the UW System is anticipating the state’s future needs

There’s nothing quite like a little independent study to get college students energized. UW-Milwaukee mechanical engineering student Ryan Hickey, a junior, shared with Regents how the opportunity to work at Johnson Controls and learn about advanced power cells in batteries has made him attractive to future employers.

“All the work I did last summer (at Johnson Controls) directly related to my work at UWM,” Hickey told the Regents. That experience led to more work in Los Angeles and the possibility of overseas opportunities. “Three years ago, I couldn’t have imagined spending my summer in California, let alone Europe,” he added.

Hickey and others on the panel credited excellent university facilities, leading-edge courses and faculty who have developed scientific partners with offering an unbeatable opportunity for students.

Another role for the University, according to Mark Lange, an entrepreneurship specialist at UW-Extension, is to focus more on building businesses. “We have to get as good at growing companies as we are at starting them,” said Lange, who directs the Entrepreneurship and Economic Development division. With the data available today, he says the UW can help companies learn to grow faster and create more jobs in the process.

Elaborating on President Cross’ earlier remarks outlining the changes in how the UW System communicates and explains its financial situation, David Miller, Senior Vice President for Fiscal Affairs and Administration, led a more in-depth description of the building building process.

“The bedrock of everything we do is for students,” Miller said. “Every other customer is only an add-on to that base.”

As groundwork for the Board to make its financial aid recommendations to the Higher Education Aids Board in June, Bob Jokisch, senior special assistant in Academic and Student Affairs, provided an overview of financial aid issues and history.

“As the number of students with financial need has increased, funding for WHEG (Wisconsin Higher Education Grants) has stayed flat,” Jokisch told Regents. He pointed out the impact that receiving – or not receiving – financial aid has on student retention and student debt levels.