MADISON – The University of Wisconsin System presented the Board of Regents with a proposal to require all UW institutions to document in personnel files instances of sexual violence and sexual harassment perpetrated by employees and to share that information with other employers, including System institutions and other State of Wisconsin agencies, during the hiring process.

The System proposal also calls for the disclosure of substantiated instances of sexual violence and harassment from prospective employers.

“It’s a tremendous step forward,” Regent Tracey Klein said of the proposed policy. “I like that we’re going to be consistent across the System.”

“It’s cutting edge and I think the other systems are looking at us in Wisconsin, leading the charge,” said Regent President John Robert Behling.

“This is a significant employee and student safety issue,” Williams said.

Further, the draft policy standardizes the content of personnel files, defines when and with whom personnel files are shared, and ensures appropriate documentation of sexual violence and sexual harassment in personnel files. The policy does not require inclusion of investigatory records in a personnel file.

The policy will undergo wider review over the coming months with shared governance groups and others on campuses across the System in anticipation of implementation in January 2019.

Williams said other systems and universities are confronting the same issue. “This is an issue everyone is wrestling with now and in real time,” he said.

Regent Mike Jones applauded the proposal. “We need to step up and stop the vicious cycle of passing the harasser from one institution to another,” Jones said.

Regent Robert Atwell urged his colleagues to make sure the policy applies to campus leaders and senior employees.

“It can’t apply to the little people and not to the big,” Atwell said.

“The purpose of this merger was not primarily to save money although I believe it will happen,” said President Cross. “Our purpose was to gain strategic advantage, and bring new programming into communities, to improve transfers, and preserve campuses.”

President’s Report: As part of his regular report to the Board, President Cross said the UW System’s second Wisconsin Idea Summit – hosted by UW-Parkside and focused on Smart Futures – attracted close-to-overflow crowds, bringing together education leaders, government officials, industry leaders, and community members to learn about what a “smart” community is and how to create it.

“The Summit was a great example of the critical role the University can play as we strive to help cities, communities, our students, and our state prepared for a connected digital future,” Cross said.

In his report on News from Around the UW System, Cross told Regents UW-Green Bay and the UW System are teaming up with the Green Bay Packers and Microsoft to help launch new companies in Wisconsin. A recently announced “Entrepreneur-in-Residence” position at TitletownTech will connect start-up businesses with investors.

In an update to the Board on the Sexual Violence and Harassment Priorities Working Group, Senior Associate Vice President and Chief Human Resource Officer Shenita Brokenburr reported a 100 percent compliance across the UW System with requirements established by state and federal laws related to Regent policies on sexual violence and harassment and consensual relationships. 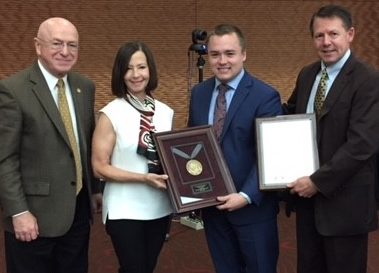 The Board presented a resolution of appreciation for UW Colleges and UW-Extension Chancellor Cathy Sandeen, who has accepted a new position as Chancellor for the University of Alaska Anchorage.

Regent Ryan Ring, who noted that both he and Sandeen are first-generation college students, read the resolution.

In other action, the Board of Regents: