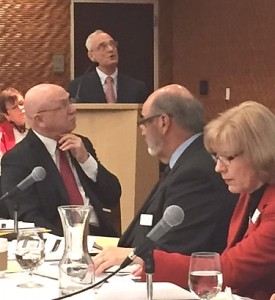 MADISON – As the state’s largest developer of human potential, the University of Wisconsin System is in a unique position to help grow a stronger Wisconsin economy, President Ray Cross told the Board of Regents Thursday.

“We are part of the solution,” Cross said, adding that the UW System must “take the lead with our partners in the legislature and the private sector to do what is necessary to fully implement the Talent Development Initiative and address the challenges.”

The Talent Development Initiative, first introduced to the Board in August, is a vision for how the UW System can align its resources in three critical areas – the talent path, the talent infrastructure, and the talent-based economy – to better meet the current and future needs of the state’s employers.

Wisconsin is facing an unprecedented “flattening” of its workforce in coming years as the state’s population becomes increasingly older, according to Todd Berry, president of the Wisconsin Taxpayers Alliance. Leading a presentation on demographic trends, Berry told Regents the result will be a smaller workforce that must increase its overall productivity for the state’s economy to grow.

“You can’t create jobs if you can’t put bodies in the jobs. If the working age population is going to be flat, we’re going to have some labor shortage issues,” Berry said. 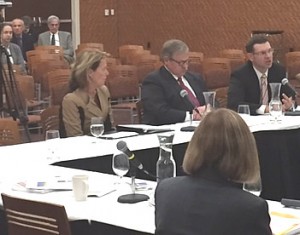 The availability of talent “is consistently the No. 1 or 2 issue in every conversation we have with a company that has a long-term investment in our community,” said Todd Battle, president of the Kenosha Area Business Alliance, noting that concerns are being expressed over whether the talent pipeline can keep up with businesses’ demands and investments.

“The university is the talent pipeline, and it can be a magnet for bringing more people into our communities,” Battle said.

Battle was part of a business panel that also included Kathi Seifert, a former executive with the Kimberly-Clark Corporation and a current member of New North, Inc.; and Mark Tyler, founder and president of OEM Fabricators, Inc., a former president of the Wisconsin Technical College System Board, and a former member of the UW System Board of Regents.

Secretary Reggie Newson, of the state’s Department of Workforce Development (DWD), shared a report indicating that by 2030, more than half (51%) of all new and replacement jobs are projected to require at least an associate degree, with 41% requiring a bachelor degree or more. Currently, about one-third (36%) of working age adults in Wisconsin have at least an associate degree and one in four has a bachelor degree or higher. This mismatch in the talent pipeline must be addressed for Wisconsin’s economy to grow, Newson said. 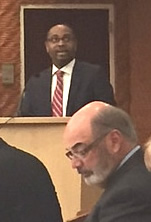 Newson addresses the board

“We need the alignment of workforce and economic development and education, pre- and post-secondary education, to the specific demands and needs of business and entrepreneurs in Wisconsin. We want to incentivize that behavior across the state,” Newson said.

Over the next decade, the DWD projects that the highest-demand occupations for degree-holders will be in healthcare, education, computer analysis, accounting, marketing, and managerial professions.

Berry pointed out the strong correlation between employment and the creation of new businesses, and the role that higher education can play in encouraging a culture that values risk-taking and innovation.

“The university shouldn’t be figuring out how to fill today’s jobs, but how to spawn tomorrow’s quirky thinkers who innovate, who will sometimes succeed and sometimes fail,” Berry said.

UW-Madison Chancellor Becky Blank, the former acting Secretary of Commerce, said that to succeed in today’s highly competitive economy, U.S. businesses must be nimble, innovate, and have new ideas. “That is what our institutions provide in terms of the people that businesses need to hire and, particularly for research universities, the ideas and the collaboration on innovation that they need.”

“We produce the people whose incomes are going up, who are necessarily the leaders who are going to create jobs, come up with new ideas, and lead the businesses that are going to be successful in this country in the future. That’s the main argument for what we do and why we’re so important,” Blank said.

Regent President Michael Falbo shared a message to the Board from Governor Scott Walker.

“I remain committed to working collaboratively to ensure we are effectively leveraging the UW System in our efforts to grow Wisconsin’s economy and create jobs,” Walker said in a statement. “I applaud your emphasis on workforce development and high impact talent, and I appreciate the partnership and vision that helped create the innovative UW Flex Option program.”

Regent President Falbo noted that this year marks the 20th anniversary of the UW System’s providing annual accountability reports. “The work we have done with Accountability Reporting over the years demonstrates that we are delivering on the significant investment that people make in higher education,” he said. “That commitment to transparency and accountability has never been more important.”

David J. Ward, interim senior vice president for Academic and Student Affairs, led a presentation of the UW System’s overall report for 2013-14, including measures of student preparation, performance, engagement, and outcomes; some insight on faculty composition and productivity; and selected measures on program efficiency and productivity.

Ward told Regents that a systemwide accountability dashboard is expected to replace the current hard-copy reports next year.

The University of Wisconsin System Board of Regents will next meet on December 4-5, 2014, at Van Hise Hall in Madison.