SUPERIOR – As the University of Wisconsin System focuses more attention on the economic potential of research and development conducted by UW institutions, the Board of Regents heard several inspiring success stories at its Friday meeting.

At the inaugural meeting of the Research, Economic Development and Innovation (REDI) Committee, Maliyakal John, managing director of the WiSys Technology Foundation, told Regents that developing more partnerships between small companies and UW campuses will create an invaluable pipeline of technological expertise.

John told the Board that the foremost challenge currently facing WiSys is a lack of resources. Other challenges include the lack of an established R&D culture in the state, a lack of marketable product ideas, and full-time teaching loads that often preclude faculty members from research activities.

The state also has significant assets, John said. The UW System, for example, has 300-400 faculty members with significant technical expertise, while the state has several thousand small high-tech companies with product concepts.

John told the Board that WiSys’ impact includes $3 million in R&D funding brought to campuses between 2005 and 2011. Collaborations have also resulted in the creation of nine start-up companies, 56 discoveries, and 32 high-paying jobs.

As an example of the kind of high-tech research that campuses can generate, UW-Stout research specialist Kenneth Smith demonstrated for Regents a hydrogen fuel cell created and developed by his company, Cool Science, LLC.  Smith expected that fuel cell to be commercialized in two to three years.

UW-Stout engineering student Destin Peters, who also has experience in materials science, said his involvement in the project “just seemed right for me.” He added, “It has really been beneficial to be able to see the entrepreneurial side of the business and product development.”

Senior chemistry majors Enkhtuul Tsogtbaatar and Katherine Anderson, both at UW-Eau Claire, spoke to Regents about their research work on new anticoagulant compounds, as part of efforts to improve the safety of warfarin use in humans.

“The research experience really helped us realize the joy and frustrations of our fellow science researchers,” Tsogtbaatar said. “It also taught me lessons: to be persistent and to have high standards of work ethics, all of which will benefit me when I get to grad school.”

Anderson added that collaborating with other scientists and attending national meetings allowed both students to see chemistry as it’s performed around the country and the world. “That gives me confidence and experience,” she said.

James Hamilton, a Wisconsin Distinguished Professor in Chemistry and Engineering Physics at UW-Platteville, spoke to Regents about the novel graphene technology being developed at his company, Xolve, LLC. He noted that American universities need to be more agile in their collaborations with businesses to be competitive.

Robinson Flaig, a chemistry major at UW-Platteville, is in his second year working with Xolve, and said the hands-on experience is invaluable. “You can go to class and learn things but doing research, I am learning how use instrumentation and how to be a team player in ways you couldn’t in the classroom,” Flaig said.

Regent Mark Bradley said the impressive presentations reinforce the intrinsic educational value of undergraduate students getting involved in research activities. He added that recognizing that value also challenges the traditional notions of what a “teaching university” and “research university” are and should be in the 21st century.

Regent David Walsh called the university’s role in generating valuable R&D “a non-partisan message we need to do a better job of sending.”

In other Committee business, UW System President Kevin P. Reilly reported that creation of a new position in UW System Administration to provide leadership for the economic development portfolio is underway. “The new position will be funded 50 percent by the Wisconsin Economic Development Corporation, reflecting a very strong University-State partnership that will help us address the needs of established industries, fledgling startups, and growing communities all across Wisconsin,” Reilly said.

Student representatives seek additional avenues for communicating with Board

Allie Gardner, chair of the Associated Students of Madison (ASM), and Dylan Jambrek, vice president and chair of the board of directors for the United Council of Students, appeared before the full Board to express their interest in developing additional avenues of communication between students and Regents. 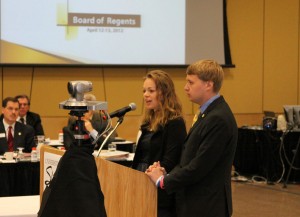 Among several requests, Gardner and Jambrek invited Regents to attend United Council meetings and to consider providing an open forum or other opportunity for public comment after Board meetings.

“It’s very clear students are more engaged in what’s going on in this room,” Gardner said. “For us to be able to add on ways we can communicate that engagement would be positive.”

Gardner acknowledged the value of those interactions, but reiterated students’ interest in having more direct contact with Board members.

Regent Jeff Bartell told the students that his fellow Board members “are happy to communicate with anyone about the functioning of the Board of Regents,” and encouraged them to initiate further contacts.

Regent Bradley noted, however, that the Board represents a broad range of constituencies and it could be logistically challenging to provide all with open forums.

Student Regent Pointer encouraged Gardner and Jambrek, as well as other students, to consider the Student Regents as their “point person.” 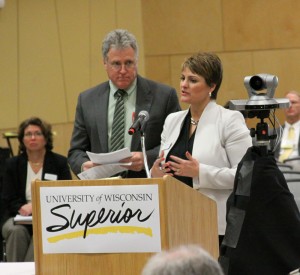 President Reilly provided an update on recent legislative activity. He noted that several bills related to higher education passed in recent weeks, including SB 461, which contains provisions on teacher preparation; AB 144, which creates a commission on financial aid; and AB 322, which facilitates making instructional materials more readily and more quickly available for students with disabilities.

President Reilly also provided news from around the UW System.

President Spector updated Regents on new Board members, noting that John Behling of Eau Claire and Regina Millner of Madison were appointed by the Governor to full seven-year terms and have been unanimously confirmed by the Senate. Earlier this week, the Governor appointed Tracy Hribar of Franksville, a student at UW-Parkside, as the new non-traditional Student Regent.

In approving a new residence hall and dining facility at UW-Platteville, the Regents noted the university’s use of an entrepreneurial public/private model to speed construction and reduce costs.

The UW-Platteville Real Estate Foundation will lease university-owned land and assume responsibility for construction of the new facility, which is needed to serve the growing number of students living on campus. Later, the Board of Regents will have the opportunity to purchase the building back. This model, reported Regent Jeff Bartell, will save about $6 million, and those savings will be passed along to students.

Regent Michael Falbo asked about the development fee, to be paid to the UW-Platteville real estate foundation from funds secured through state bonding authority. UW System Associate Vice President David Miller pointed out that this is consistent with standard practice, in which all construction costs are paid through state bonds, including the 4% development fee typically paid to the State’s Department of Administration. The UW-Platteville real estate foundation’s development fee, by comparison, is significantly less.

Regents get update on Task Force

Regent Michael Falbo, who chairs the Legislative Task Force on UW Restructuring and Operational Flexibilities, provided an update on the group’s most recent meeting on April 10. The agenda at that meeting included presentations on capital construction and purchasing, and continued discussion about previous presentations on governance structures and advisory boards.

Falbo said that the Task Force members  were impressed with the well-thought out, constructive presentations and specific recommendations for change offered by UW staff. However, he said that members of the Task Force were somewhat disappointed with the responses from Department of Administration (DOA) staff.

“We got very little back from the DOA in the form of specific suggestions,” said Falbo. “They said everything’s fine, but I don’t think that any member of the Task Force believed that.”

With respect to ongoing deliberations about governance structures and the roles of local advisory boards, Falbo reported that the Task Force is still weighing the pros and cons of many suggestions. While the group’s members generally agree that more authority be pushed out to the institutions, the focus remains on relieving UW campuses from burdensome state regulation.

Regent Tim Higgins noted that several members of the Task Force have not yet weighed in on this issue of governance structures.

“We’re waiting for a full discussion of this topic, so it’s too early to catch the drift of the Task Force as a whole,” said Higgins. 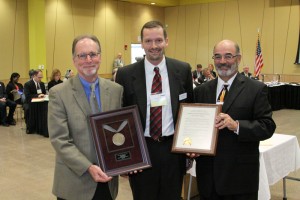 Introducing a resolution of appreciation for Student Regent Troy Sherven, whose term of service is ending, Regent Mike Falbo saluted Sherven him for providing “a new and significant voice” to Board discussions, also noting that Sherven is the first on the board to be enrolled in an online degree program.

Falbo added that getting to know Sherven gave him “comfort and confidence that our future is in good hands.”

Sherven thanked Gov. Scott Walker for the opportunity to serve as a Regent and said, “I can’t think of a better way to top off a management degree.”

Acknowledging the many challenges facing higher education and the state, Sherven said he is encouraged about the future of the UW System when he thinks of the men and women leading it.

The UW System Board of Regents will hold its next meeting June 7-8, 2012, at UW-Milwaukee