UW-Superior is building on Partnerships for Progress

SUPERIOR – “UW-Superior’s ‘Partnerships for Progress’ is a shining example of The Wisconsin Idea in action,” said Chancellor Renée Wachter, in welcoming UW System Board of Regents to the UW-Superior campus on Thursday. 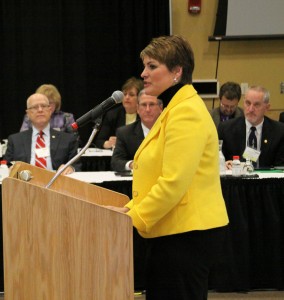 While the university celebrates its core mission of providing a liberal education and a dynamic learning experience for its students, UW-Superior also takes pride in contributing to the local economy and the environment, Wachter told Regents.

Wachter pointed to three research centers based on the campus that “harness intellectual assets to solve real problems.”

Mary Balcer, director of the Lake Superior Research Institute, shared with Regents some of the important work that the institute and the students doing research there are currently engaged in, including erosion issues, contaminants in fish, and environmental monitoring. “It’s not enough just to publish research in scientific journals,” she said.

Director Richard Stewart told the Board that the focus of the Transportation and Logistics Research Center is applied research, from more efficient transportation of goods to repowering of a Great Lakes vessel with cleaner fuels. “We, like the students, are very excited about the future of our research,” Stewart said.

Ralph Garono, director of the Lake Superior National Estuarine Research Reserve, noted that their work is extending the reach of research internationally. “It’s about partnerships, it’s about leveraging money, and it’s about return on investment,” he said. He also noted that the reserve’s long-term research project, which involve much more than aquatic sciences, try to make connections between disciplines, including artists, economists, and scientists.

“You can see that the connection of our region and resources provide critical solutions to varied problems and educational opportunities for our students,” Wachter said.

Expressing her appreciation for the presentation, Regent Judy Crain commended its focus “on what makes this institution unique in the state.”

Regent Mark Bradley, noting that the Board’s new Research, Economic Development & Innovation (REDI) committee would be holding its first meeting on Friday, said the UW-Superior presentation was especially timely. “One of the purposes of that committee is to highlight for state decision-makers what important roles are being fulfilled by each of campuses in taking the work going on campuses and in classrooms, and directly applying that for solutions to the challenges in our communities, our businesses.” He said the UW-Superior presentation very effectively captured that connection.

As an alumnus of UW-Superior, Regent Ed Manydeeds said the presentations highlighted the important relationships between the campus and the region.

In advance of the Board taking action on a 2013-15 biennial budget proposal in August, Michael Morgan, Senior Vice President for Administration and Fiscal Affairs, led a presentation and discussion of the System’s strategic and budget priorities.

Morgan launched the discussion by reiterating the continued relevance of the Growth Agenda for Wisconsin, and the state’s need for both well-prepared graduates and well-paying jobs, as well as the need for vibrant communities where businesses and citizens alike can thrive. In working to address these needs, he noted, state resources provided to the UW System should be considered a sound investment, not merely an expenditure. 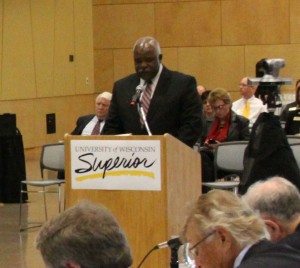 Morgan also cited the challenge of balancing high educational quality with broad, affordable access, and state demands in terms of performance and accountability.

On the issue of more graduates, Regent Judy Crain suggested that “the priority for us has to be doing better in educating Wisconsin students.”

Regent Troy Sherven, a non-traditional student, said the university needs to be more aggressive in marketing itself to students like himself, as long as increasing enrollments doesn’t compromise quality.
Acknowledging he didn’t expect an answer, Regent Tony Evers nonetheless asked the question, “How can we possibly increase grads and decrease state support?” He added that unless it can be realistically accomplished, perhaps the goal should be re-examined.

“That’s the tension we have to work through,” Morgan said.

Regent Tim Higgins commented that quality must be defined from point of view of the customer.

Regarding jobs, Morgan reminded Regents that the university is uniquely positioned to serve the state as both a partner and catalyst for job creation. “Unlike other entities that can promote either workforce development or economic growth, the university is critical to doing both: preparing the workforce through education and fostering job creation,” he said.

Regent Mark Tyler suggested that the university should more directly address the “job probability index.” “If we don’t get in front of that issue we’re going to get beat up bad,” he said.
Crain expressed concern that public-private partnerships in areas such as research don’t compromise academic integrity.

Ultimately, the university’s commitment to improving access and maintaining affordability is threatened by constrained resources, including budget cuts and lapses of state funding, Morgan said.

“We need to work very purposefully in ensuring that over this next budget we get the resources we need from the State of Wisconsin,” Morgan said. “We’re willing to make commitment that we’ll meet the performance measures they put before us, so long as we get the investment necessary to drive quality, to drive access and affordability, so that our schools are not just distinctive group of elite universities but universities that still have their doors open to children of working class families in the state of Wisconsin. That’s our challenge.”

Given the objectives and needs of the state’s economy, Morgan urged Regents to consider whether attention is focused on the right priorities, and how the 2013-15 budget request can be shaped to best reflect those priorities.

The Regents unanimously approved a Resolution of Appreciation for UW-Eau Claire Chancellor Brian Levin-Stankevich, who has accepted a position as President of Westminster College in Salt Lake City, Utah. 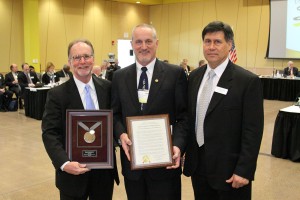 Regent Ed Manydeeds, who presented the resolution, called Levin-Stankevich a great communicator and campus advocate. “He’s someone who cares about his campus community and the students and the people who work there in all phases,” Manydeeds said.

Levin-Stankevich thanked the Board for asking the hard questions and also providing support to the campuses. He noted that it had been “a privilege to serve an extraordinary campus – with the largest marching band in the state.” He urged the Regents to focus on addressing the “increasingly difficult environment” that faculty and staff work in all around the System, which ultimately threatens the campus culture that is UW institutions’ greatest asset.  In that regard, he called on Regents to help create an environment that encourages innovation, rewards achievement, and values contributions.

Interim Senior Vice President Mark Nook reviewed key findings and recommendations of the Ad Hoc Committee on Regent Roles and Responsibilities, as they relate to the work of the Education Committee.  Those recommendations included focusing the Committee’s attention on items that are critical to fulfilling the Board’s statutory and governance responsibilities, on items that are high-profile and emphasize the role of the Board in providing strategic direction and high-level policy setting, and items that present a new, unique, or challenging situation for an institution or the System.

UW-Stout Provost Julie Furst-Bowe and Associate Vice President Stephen Kolison, co-chairs of the systemwide working group on Program Planning & Review, previewed revisions being proposed to the UW System’s Program Planning and Review Process, particularly as they will relate to the role of the Regents in academic program approval.

Regents hear about proposed flexibilities for procurement and building program

Associate Vice President David Miller gave Board members on the two committees an overview of information presented to the Legislative Task Force on UW Restructuring and Operational Flexibilities on April 10 regarding additional operating flexibilities that could be provided to UW System institutions.

Noting that UW is considered among the most regulated universities in the country, Miller pointed out how a high degree of state control impacts the cost and efficiency of processes related to procurement and the building program.

With a UW building program that averages more than $1 billion in project spending each biennium through a combination of funding sources, Miller said it was suggested to the task force that approvals and oversight should correlate to the scale of the project.  “We believe that all projects should be evaluated to properly align the level of attention and effort with the level of risk,” Miller said.  Projects with the greatest risk should receive the greatest level of touch.

Miller told Regents that the university is recommending greater alignment between the amount of authority with the amount of activity in the projects. In effect, this would allow the university to maximize its expertise in planning and design, and allow the Division of State Facilities to maximize its expertise in bidding, contracting and construction.

Miller also said the enumeration process for building projects could be made more efficient and that greater emphasis should be placed on existing buildings, with a base level funding established for those assets.  He noted that UW-Superior provides a fine example of how that can be effectively accomplished.

The two committees also heard a presentation by UW-Superior on the physical transformation of the campus. Vice Chancellor Jan Hanson noted that the last time the Regents visited Superior in 2004, a “warts tour” was offered. “Now,” she said, “we’re showcasing.”

Since its Campus Master Plan was developed in 1999, UW-Superior has successfully completed $200 million in capital investments, including several major projects that have transformed both the character and operation of the campus, Hanson said. These projects include the renovation of the library, the replacement of the student union, and the replacement of several obsolete academic buildings with a new state-of-the-art facility.

Terry McGlasson, a professor in Clinical Mental Health and an advisor, said the revitalized campus environment sends the message that learning and students are valued on campus. “An environment does affect how teachers teach and how students learn. I see it every day,” McGlasson said.

Morgan noted that bottom line issue is how much change the UW will be allowed to put in place with the new personnel system. “We want optimal flexibilities,” Morgan said.

Morgan also briefed the committee on the annual distribution adjustments for new GPR/Fee funding in the coming 2012-2013 fiscal year. While part of the 2011-2013 biennial budget, these second-year amounts have not yet been allocated among UW System institutions.  Additional funding will be allocated in four areas – Lawton Undergraduate Minority Retention Grants and the Advanced Opportunity Program, Tuition Increase Grants, Utilities, and Student Technology Fees.

UW-Stevens Point Chancellor Bernie Patterson and UW-Stevens Point students presented information and background on “the Pointer Compact,” a new differential tuition proposal for the institution. Given the Act 32 prohibition on increases in tuition beyond a 5.5% ceiling for this biennium, the Committee was simply apprised of the institution’s interest in pursuing differential tuition and of the student involvement in and support for a quality-enhancing tuition initiative, and was not asked to approve the differential.

In a related matter, the Committee approved an extension of the scheduled five-year review of a number of previously approved differential tuitions until February 2013. The request is being made to avoid any potential conflicts with Act 32 language which prohibits any new tuition increases during this biennium, including differentials, beyond the stated 5.5% cap.

In other business, the Business, Finance & Audit Committee:

He also reported on Governor Walker’s presentation of the 2011 Division of State Facilities Best Project award to the design and construction team that created Centennial Hall, the new academic building on the UW-La Crosse campus.

All committee-approved items will be brought to the full Board for a vote on Friday.

The UW System Board of Regents will resume its April 2012 meeting at 9 a.m. on Friday, April 13,
in the Yellowjacket Union, UW-Superior