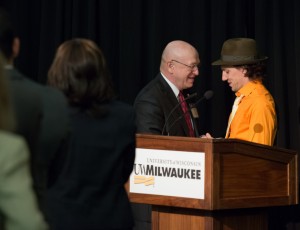 President Cross thanks David DeFilippis, a UW-Milwaukee student double majoring in Biology and Italian Studies, and featured in this month’s student spotlight.

MILWAUKEE – The University of Wisconsin System Board of Regents on Friday unanimously passed a resolution to move language concerning tenure as it currently exists in state statute into Regent policy.

That policy, which will take effect if related state statutes are repealed as proposed, will sunset on the date the Board adopts a long-term tenure policy as a result of the work by the tenure policy task force, chaired by Regent John Behling. The task force has been charged with reviewing specifics of the policy – including layoff provisions – and providing a report to the Board by April 2016.

The board’s actions were prompted by action taken by the Joint Finance Committee on May 29, 2015, to remove statute 36.13, Wis Stats. – the provision regarding tenure – from Chapter 36 as part of its UW System omnibus motion.

Regent Drew Petersen called the tenure resolution an affirmation of the Board’s respect for the importance of tenure and academic freedom, and noted that faculty members are included in the process. “I believe that this Board is committed to completing action on a modernized tenure policy so we can eliminate any ambiguity or volatility and reaffirm a robust policy for the UW System,” Petersen said.

A subsequent motion by Regent Mark Bradley asking that the state legislature remove non-fiscal policy provisions from the omnibus budget motion was tabled by the board on a voice vote.

“The history of this Board of Regents supporting academic freedom of our faculty members goes back 121 years and I certainly expect that we will continue to respect that tradition,” said Regent Tim Higgins.

Millner was appointed to the Board by Gov. Walker in 2012. Her career as a lawyer and consultant in commercial real estate spans more than 30 years. Millner also has served in leadership positions on the boards of many corporations, both for-profit and not-for-profit. She currently serves as on the UW Hospital board and the Educational Communications Board. She is also Governor Walker’s Regent appointee to the Wisconsin Museum Task Force and the Wisconsin Higher Educational Aids Board.

Millner earned her law degree from the University of Wisconsin Law School, a Master of Science in Real Estate and Urban Land Economics from the UW-Madison School of Business, and a bachelor’s degree in education from University of Nebraska-Lincoln.

Behling has served on the Board since 2012. He currently serves on the Business and Finance committee as well as the Research, Economic Development, and Innovation committee. He is the executive vice president of regulatory affairs and general counsel for Smart Sand, Inc. Smart Sand is a leading supplier of industrial sand serving customers in the oil and gas industry. He earned his law degree from the University of Wisconsin Law School.

DeFilippis, a first-generation college student who worked as a diesel mechanic before enrolling at UWM, described his undergraduate research work to design devices that measure tree growth – and that he put into use during a research project in Panama.

“Without UWM, without the opportunity to go to college, I wouldn’t be where I am right now,” DeFilippis said. “Without world-class professors that travel to different areas of the world, that (research) opportunity wouldn’t happen. If you’d told me five years ago that I’d go to Panama for five months, I wouldn’t have believed it.”

As part of his report on news from around the UW System, President Cross told Regents that UW-Extension and UW-Milwaukee have just recently received notice from the U.S. Department of Education that UW-Milwaukee’s Flex Option programs are now approved to award Title IV aid – that is, federal aid for students enrolled in competency-based education.

David J. Ward, interim senior vice president for academic and student affairs, led the presentation, “Better Preparation of Graduates: Student Engagement through High-Impact Practices.” Recent research provides evidence that a variety of practices that encourage a high level of student engagement are main factors in student success. The presentation shared research on the efficacy of HIPs in engaging students and increasing student success; explained the key attributes and features of HIPs. 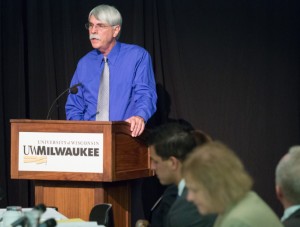 In its highest recognition bestowed on members of the academic staff, the Regents honored two professors and one academic program for their outstanding achievements with the presentation of the 2015 Regents Academic Staff Awards for Excellence.

“Their outstanding work – along with the work of academic staff systemwide – helps to strengthen and invigorate not only our UW institutions, but the communities in which they serve,” said Regent Jan Mueller, chair of the selection committee. 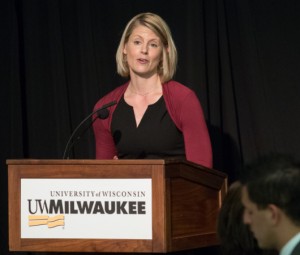 Gene Clark, a coastal engineering specialist at UW-Madison’s Sea Grant Institute, said that the Wisconsin Idea infuses the work done at the Aquatic Sciences Center. “Are these work tasks relevant to Wisconsin issues, and can we make an impact with our efforts?” he asked. “I am honored to represent the University of Wisconsin with my work.”

Jennifer Elsesser, the assistant director of UW-River Falls’ Counseling Services, told Regents that growing numbers of students are coming to college with more serious mental health issues. She urged people to remember “the tremendous capacity to heal, and even thrive, after the worst circumstances.” Elsesser said creating a culture of wellness can help students be healthier upon graduation than before they entered college. 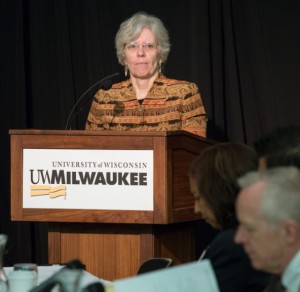 Regents saluted the service and accomplishments of Regent Anicka Purath, whose term on the Board has concluded. Purath, a UW-La Crosse student double-majoring in Political Science and Public Administration, served this past year as one of two student representatives.

“I am so grateful for this experience,” Purath said, noting that she now has a much greater understanding of what the UW System has to offer. “Both the colleges and universities never cease to amaze me, and more importantly, they produce exceptional students who are vital to the future of Wisconsin and the United States as a whole.”

She urged Regents to “continue to emphasize the importance of affordability and transparency and that you keep students in the forefront of your minds.” 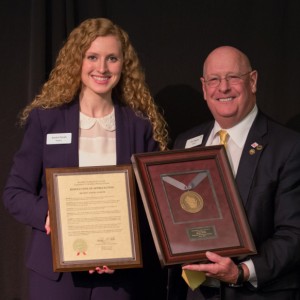 Purath (left), departing Regent, and Regent Higgins, who presented her resolution of appreciation

The UW System Board of Regents’ next meeting will be July 9, 2015, in Madison.