Planning and implementation for restructuring of UW Colleges, UW-Extension is underway (news summary)

MADISON – The University of Wisconsin System is going “full steam ahead” with plans to restructure the UW Colleges and UW-Extension, according to President Ray Cross.

Presenting the first progress report on the planning and implementation process since the Board of Regents approved the restructuring proposal last month, Cross told the Regents Thursday that significant progress is already being made.

“We are well underway in the planning phase, with the goal of having the new organizational structure in place by July 1,” Cross said.

Cross provided an overview of the project’s Steering Committee, chaired by Rob Cramer, Vice President for Administration. The committee includes representatives from UW College and UW-Extension, UW System Administration, the receiving comprehensive and research institutions, and the rest of the UW institutions. It receives vital input from the Chancellors Advisory Group, as well as faculty, academic staff, university staff, and students Shared Governance representatives.

Cross identified several key decisions that have been made:

Cross reported that the UW System has been in close contact with the Higher Learning Council (HLC), its accrediting body, as the planning and implementation process for the restructure continues. “Our priority at this time is to complete a single systemwide Change of Structure submission request for HLC,” he said.

Cross noted that the UW Colleges will continue to be recognized as branch campuses, per HLC guidelines and criteria, following the restructure.

While it was originally proposed that UW Colleges’ Associate’s degree in the Online format as well as the same degree in the competency-based and direct-assessment mode – commonly referred to as the Flex format – would be moved under UW System Administration, conversations with HLC have led to an amended proposal.

“We have determined these two delivery modalities should be aligned with an accredited, four-year institution to most efficiently and effectively maintain accreditation continuity,” Cross said.

Regents voted to approve a resolution giving President Cross the authority to address that change. The decision on a receiving institution for the UW Colleges’ Associate’s degree in these two delivery modalities must be approved by the Regents’ Executive Committee.

The Regents approved an outcomes-based funding model for allocating new state funds to UW institutions, in accordance with the newly-created Wis. Stats. §36.112.

As part of the recent budget process, the Wisconsin Legislature identified the following goals, each with four metrics, for the UW System:

The outcomes-based funding model will be in effect after active review by the Joint Finance Committee. Once approved, the funding model will be utilized to distribute $26,250,000 in new state appropriations during the 2018-2019 biennium. UW institutions will receive a proportionate share of new funding based upon the outcomes they achieve for each of the four statutory goals.

It should be noted that the model only applies to new state funding. The distribution of baseline funding to the institutions will remain stable.

Other highlights from Thursday’s meeting of the Board of Regents included:

President Cross presented a brief overview of recent state legislative activity. He noted that the UW System continues to work closely with state legislators on a number of initiatives aimed at providing more flexibility and regulatory relief for UW institutions. Cross also told Regents that UW System is committed to working with the State and with Foxconn to ensure talent initiatives are in place to anticipate and deliver the talent needed to support the enterprise.

On the federal front, Cross updated the Board on key provisions in the House and Senate versions of the Tax Cuts and Jobs Act that are of particular interest to higher education, including the income exclusion of tuition waiver, the Student Loan Interest Deduction, and the Lifetime Learning Credit. Cross said the UW System “has been advocating vigorously” for the adoption of the Senate’s approach in retaining these key provisions.

As part of his report on News from Around the UW System, Cross told Regents that UW-Stout has been named a Center of Academic Excellence in Cyber Defense. The national designation highlights classes, such as computer networking, that have cybersecurity components. 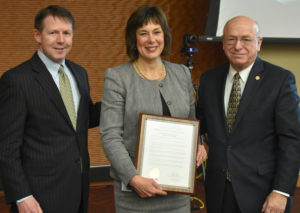 The Regents approved a Resolution of Appreciation for State Senator Sheila Harsdorf, who has been “a tireless advocate and partner for the University of Wisconsin System for nearly 30 years.”

Harsdorf, who served in numerous leadership capacities in the legislature including as Chair of the Senate Committee on Universities and Technical Colleges and member of the Joint Committee on Finance, recently accepted a new position as Secretary of the State of Wisconsin’s Department of Agriculture, Trade, and Consumer Protection.

President Behling, who noted that he had worked on the Harsdorf family farm growing up, said it was an honor “to recognize someone who I think is one of our greatest advocates.”

President Cross cited Sen. Harsdorf’s commitment to listening and understanding. “She comes to issues without her mind always made up,” Cross said.

Addressing the Board, Harsdorf urged Regents and university leadership to continue reaching out to legislators. “It’s only through working together and working as a team that great things are accomplished,” she said.

“We have a System second to none,” Harsdorf said. “There are states that would give anything have a university system like this one. We can’t take it for granted.”

President Cross announced that Quinn Williams has been named the System’s new General Counsel. Williams comes to the UW System from the Department of Natural Resources, where he has worked as legal counsel for the past 10 years, including as Chief Legal Counsel in the Bureau of Legal Services since 2015. In that time, he has worked closely with the Legislature under two administrations.

President Cross also announced that Rebecca Deschane will be joining UW System’s economic development team as the new Talent Initiatives Director. This is the second joint appointment with the Wisconsin Economic Development Corporation. Deschane, who has been with WEDC since 2001, will help align local, regional and statewide talent and workforce initiatives to support the talent needs of Wisconsin’s businesses.

Two Regents announce they will be stepping down

Regent Margaret Farrow informed the Board that she would be resigning her position effective immediately for personal reasons. The former Lt. Governor of Wisconsin was appointed to the Board in 2013.

Student Regent Lisa Erickson, who was named to the Board in 2016 as the non-traditional student representative, will graduate this month from UW-River Falls with a degree in journalism and minor in food science. Her graduation concludes her term on the Board.

Regents Farrow and Erickson will be formally recognized for their service at a future Board meeting.

The University of Wisconsin System Board of Regents will next meet on Feb. 8-9, 2018, at UW-Madison.