University of Wisconsin System Board of Regents December Meeting, Day One News Summary 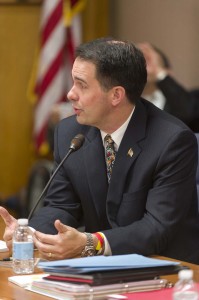 MADISON – Addressing the full Board of Regents on Thursday, Governor Scott Walker praised the University of Wisconsin System for its innovative and relevant contributions to economic and workforce development in the state.

“Our University of Wisconsin campuses are some of the leading catalysts for economic growth and prosperity in the region and in the state … This is a call to build off that strong partnership and that leadership that we see not only from Regents here but from our individual campuses all across the state,” Walker said.

He singled out the UW System’s Flexible Option as “a giant step forward,” providing ground-breaking, valuable educational opportunity while meeting the needs of both students and employers. “This is one of the areas where the University of Wisconsin is stepping up and being more relevant than ever,” Walker said.

He also thanked UW System President Kevin P. Reilly, who is stepping down at the end of this month, for his leadership on growing the UW System and a variety of economic development initiatives, including UW Flex.
Walker told Regents he wanted to speak with the Board not just to affirm the good work that’s been done so far, but also to spark enthusiasm for what more can be done in the future.

He acknowledged the Regents’ work to improve transparency and accountability. “When people see where their resources are going, that it’s not just a blank check but here’s what it’s for and here’s what the results are, that makes a huge difference,” Walker said.

Regarding additional flexibilities for campuses that were ultimately removed from the last budget, Walker said, “I’m committed to going down that same path again. I think one of the great benefits is to give the chancellors greater flexibility, greater opportunity to do great things on their campuses. And I think most lawmakers, both parties, believe that to be true.”

“This gives us an even greater opportunity to be even more transparent and more clear and more accountable. Then, I think as we come back in the next budget process, there’s a real opportunity to put even more power, and not just autonomy but more flexibility to do some of the great things we’re talking about, at individual campus levels – which I think is a good thing for our institutions and our system and ultimately our state.”

UW System is in unique position to assess remedial education

At a time when more and more college students nationally are requiring remedial education, the UW System is in a unique position to evaluate remedial education standards and strategies, Senior Vice President Mark Nook told the full Board Thursday.

Currently, different UW System institutions have quite different student bodies, different academic standards, and different courses of action for remedial work. While that diversity poses challenges in forming conclusions from aggregate data, it also creates a rich source of data to mine, Nook said.

“Wisconsin has a unique opportunity. Nobody else has this consistent set of data. We have a large number of students over a very long period of time for which we have high school class rank, ACT scores, our placement test scores, and in addition we have the multiple different ways our institutions have decided to use remediation. It gives us the opportunity to figure out best practices in remediation in ways that no-one else has been able to do,” Nook said.

Nook noted that four factors affect remedial (or developmental) education enrollments at UW campuses: the academic preparation of incoming students; the admission standards used by each institution; the specific placement or college readiness exams used; and the cut-off standards used to determine who gets placed in developmental courses. The UW has control over the latter three, Nook said.

“We know that remedial classes typically extend students’ time-to-degree and, therefore, the overall cost of their college education. Neither of these outcomes is acceptable,” Reilly said.
In October, Reilly appointed a Systemwide task force to examine the remedial education efforts throughout the UW System. That task force – co-chaired by Phyllis King, Associate Vice Chancellor at UW-Milwaukee; Dennis Rome, Associate Provost at UW-Parkside; and Mark Balhorn, Professor of English at UW-Stevens Point – has been charged with reviewing the current Regent, System, and institutional policies relating to remedial education in the UW System, Reilly said, and will submit a report by the end of  academic year.

Nook identified several key questions that must be addressed: Are students appropriately placed into remediation? Does remediation work? And is our system of remedial education worth the investment?

The percentage of students placed in remedial education in the UW System overall has been relatively constant over the past five years, with 24.5% of UW freshmen in Fall 2012 requiring some form of remedial education. This figure is on par with national averages, Nook said. Further breaking it down, 20.7% of UW freshmen in Fall 2012 required some math remediation, 9.9% required some English remediation, and 6.1% required both.

Regent Michael Falbo said he is troubled by suggestions that too-high remediation standards might be in part responsible for larger numbers of students requiring remedial work. “It’s that kind of philosophy – if we lower our standards, we lower our remediation rate – that scares me a lot,” Falbo said.

Nook agreed, but added: “What also scares me is kids taking remediation who don’t need it.”

Regent Margaret Farrow expressed concern that more attention needs to be focused on students’ academic preparation before they get to college.

Regent Tony Evers, State Superintendent of Public Instruction, acknowledged that PK-12 has a major role to play in making sure remediation rates decline. “This is exactly why we have shifted our focus … to graduate students who are career- and college-ready. It’s why we (in Wisconsin) adopted the Common Core,” Evers said.

Nook reminded Regents that remediation is not state-funded. Rather, classes are self-supporting, and funded 100% from fees paid by participating students.
Two UW institutions offered brief presentations on their programs.

Under the new reporting guidelines approved by the Board of Regents in November of 2012, officials from UW-Green Bay presented the Board with their first NCAA Division I Athletics 2012-13 Annual Report.

Regents heard that in 2012-13, UW-Green Bay saw the highest combined GPA (3.26) for Phoenix student-athletes in school history, with records established for both the fall and spring semesters. Spring 2013 became the 27th consecutive semester that the combined GPA exceeded 3.0, and 12 of the 16 programs achieved a team average GPA of 3.25 or higher. The graduation success rate of 83% for student-athletes was significantly higher than the general student population rate of 51%. Eight teams posted a perfect graduation rate of 100%.

UW-Green Bay’s new Athletic Director Mary Ellen Gillespie – who’s been on the job for just over a week – called the athletics program “an incredible platform for student – and alumni – engagement.”

Regent Emeritus Jeff Bartell briefed the REDI committee on the evaluation and selection of recipients of the UW System’s Incentive Grants, awarded since the last Board meeting. The one-time, $22.5-million grants program aims to help fund economic development, workforce development, and initiatives to improve the affordability of higher education.

“This is about as direct a shot in the arm as you can get,” Bartell said, noting the continued alignment between the Wisconsin Economic Development Corporation and the UW System.
The REDI Committee approved a resolution of appreciation for Regent Emeritus Bartell and the Incentive Grant Committee. The resolution further encourages all grant applicants and grant recipients to foster increased business and job growth through continued emphasis on research, economic development, and innovation at all campus locations.

The Capital Planning and Budget Committee approved UW System’s request to renovate Brittingham House, the residence of the UW System President, with funds from the Tripp Trust Fund not to exceed $500,000. The project will remediate mold, install an Americans with Disabilities Act (ADA) compliant restroom, and upgrade various public and support spaces. A major renovation of the facility has not taken place since 1969.

The Education Committee approved the Wisconsin Partnership Program’s latest Five-Year Plan (for 2014-2019), which was part of a presentation by Robert Golden, Dean of the UW-Madison School of Medicine and Public Health.

A highlight of this third five-year plan is its focus on obesity prevention. As noted by the chair of the Partnership Education & Research Committee in the report, “Unless there is a measurable level of success in reversing obesity rates, the state’s health systems will be overwhelmed.” The primary goal is to drive down the obesity rate in Wisconsin. Short-term objectives include testing strategies for effectiveness, and involving public policy makers in implementing the initiative.

Other new initiatives brought forward include the Opportunity Grant Program, which supports short-term projects to leverage local funding opportunities that enhance communities’ capability to collaborate with the health care system on mutually identified priorities; and transformation of the medical curriculum to include all of the School’s educational programs in the development of new educational models uniting public health and medicine.

Among other initiatives to receive continuing support are the Lifecourse Initiative for Healthy Families, which aims to improve birth outcomes among African Americans in southeastern Wisconsin; and the Population Health Service Fellowship Program, which employs early-career public health professionals in governmental or community-based organizations to address public health issues.

Distribution of GPR and Tuition Revenue: The Committee approved a UW System policy on the allocation of GPR and tuition resources to individual UW institutions. If the full Board now approves the policy on Friday, the policy will be submitted to the Legislature’s Joint Committee on Finance by Jan. 1, 2014, for a 14-day passive review. The policy codifies current practices in this area, and will sunset as of June 30, 2015.

Earlier this week, President Reilly formally charged a UW System Working Group on Funding Allocation to review the current methodology used to allocate general purpose revenue and tuition among institutions, and determine whether changes are needed to the process. The workgroup will report to the Board at the June 2014 meeting.

Human Resource System: The Committee also was updated on efforts to address recommendations made by PricewaterhouseCoopers regarding external risk assessment of the Human Resource System (HRS). The update focused on the status of the organizational transition of the UW Service Center from UW-Madison to UW System Administration, and progress on the HRS roadmap, an action plan to achieve stability and critical functionality. It was reported that as of Dec. 1, the operation and reporting lines for employees of the Service Center had been moved from UW-Madison to System Administration.

Several regents expressed satisfaction with how things were progressing.

Committee chair Regent Gerald Whitburn, who requested the report, called it a benchmark that should be updated in future years. He reminded the Committee that turnover is a nuanced issue, however. “A certain amount of turnover is a good thing – fresh ideas, fresh eyes – but excessive turnover can be dangerous. The question is balance,” Whitburn said. He also pointed out that the impact of turnovers often goes beyond hard data. “What if two of the three (who leave) are among those you most want to keep?” he asked.

The UW System Board of Regents will resume its meeting at
9 a.m., December 6, 2013 in Van Hise Hall, Madison