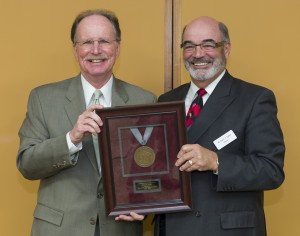 MADISON – In his final meeting with the Board of Regents, University of Wisconsin System President Kevin P. Reilly urged his colleagues to remember the purpose and mission that define the University.

“We in the University of Wisconsin are charged with developing in our students intellectual, cultural, and humane sensitivities, and scientific, professional, and technological expertise. Sensitivity and expertise; culture and technology,” Reilly said, expounding upon the state law that created the UW System in 1973.

“We in the University of Wisconsin are to discover and disseminate knowledge, and to extend and apply it,” he said. “The law does not afford us the luxury of taking on one or the other of these tasks. We are required to do both, and they sit comfortably astride each other in the language of the statute.”

Reilly acknowledged the many challenges facing the UW System – as well as higher education overall – including outdated financial models, the rapidly morphing teaching and learning paradigm, the disruptive effects of new technologies, the influx of “post-traditional” students, the resistance to tuition increases, and the call for more contributions to economic development and job creation.

But such challenges also make it an exciting time to be in American higher education, he added. “We now have the opportunity, employing the new information and teaching technologies, big data, learning analytics, partnerships with business, industry, and government, to re-outfit the university for 21st-century demands,” Reilly said.

Reilly is stepping down at the end of this month, after more than nine years of service. He will be advising the leadership program at the American Council on Education, based in Washington, D.C. He also expects to return to teaching.

Before reading a resolution of appreciation for President Reilly’s service, Regent Michael Falbo, who has served as Board President since 2012, noted that it was at his very first Board meeting, back in 2004, that the Regents approved Reilly as President.

“Since then he has proven himself to be an outstanding leader, with vision and fortitude through some very interesting times,” Falbo said. “The challenges at times have been formidable, but he has met every one with intelligence, grace, integrity, common sense, a great sense of humor … and the occasional poem.”

“We have benefited from his wisdom and experience over the years. UW System will miss his steady hand at the helm,” Falbo said.

Regent David Walsh, who served as Board President from 2005 to 2007, said Reilly had done a remarkable job in a challenging position with many, diverse responsibilities. He cited three attributes that made Reilly successful: his understanding of university systems; his appreciation of academic issues like academic freedom and shared governance; and his strength of character.

Walsh also said he’d learned two big lessons from Reilly. First, that issues surrounding money and flexibilities will always be here, to varying degrees. Second, to remember the university’s noble purpose to provide “access to all in the state of Wisconsin to a great, great education.”

Regent Mark Bradley (Board President 2007-2009) said the people of Wisconsin have benefited from Reilly’s good ideas, his sense of direction, and his high integrity. Bradley called the Growth Agenda, developed under Reilly’s tenure, “the North Star for the path to prosperity for a state like Wisconsin in the 21st-century economy.” “Kevin conceived of this direction and clearly, tirelessly articulated it around state. It was not the Growth Agenda for the university, it was the Growth Agenda for the people of Wisconsin,” Bradley said.

Bradley also noted that integrity comes up as a recurring theme in reminiscing and reflecting on Reilly’s service as president. “When the door is shut, the pressure is on, the stakes are high … the inquiry is always led by facts, all the options are considered. Then, a decision is made, guided by a highly developed sense of integrity. With Kevin, whether in public or in private, what you see is what you get,” Bradley said.

The relationship between the Board President and System President is critical, said Regent Chuck Pruitt, who served as Board President from 2009-2011, when the issue of potentially separating UW-Madison from the UW System surfaced. “It was a painful time for all of us,” Pruitt noted. “But I remember very early in that process, he and I agreeing that in months to come, there would not be and could not be a sliver of light between us, that we always needed to be on the same page, that we always needed to pull together. You don’t do that unless you believe, as I did, that you have a partner you can count on, that you had someone with an extraordinary sense of integrity, that you had someone you wanted to share the same foxhole with.” Pruitt added that Reilly had similar relationships with UW chancellors.

“During those challenging days when we debated the future of the UW System, nothing impressed me more than Kevin’s ability to hold together a coalition of all our chancellors in support of our continued union and the Wisconsin Idea,” Pruitt said. “In the end, we learned that the people of Wisconsin loved this university and wanted us to continue with this 42-year-old experiment.” The fact of the current meeting being held in Van Hise Hall on the flagship’s campus is, Pruitt said, “a fitting and enduring legacy of Kevin Reilly’s leadership of this university.” 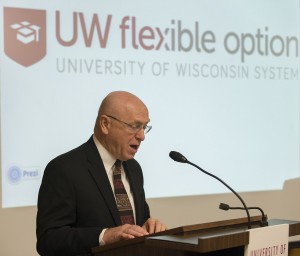 Students interested in the competency-based UW Flexible Option soon will be able to choose from a wider array of certificate programs. As part of a detailed update on the development and roll-out of the Flex Option program, Aaron Brower, Interim Provost and Vice Chancellor at UW-Extension, told Regents that four more UW institutions have committed to offering programs in the new format: UW-Parkside, UW-Stevens Point, UW-Stout, and UW-Madison.

UW-Parkside is developing two new certificate programs, one in Sales and the other focused on Global Skills. The campus plans to develop four additional Flex Option certificate programs in the future. Eventually, the campus hopes to propose a new baccalaureate degree built on these “stackable” certificates.

UW-Stevens Point is working on a certificate in Geographic Information Systems (GIS) to provide skills needed for geospatial technology professions. These include emergency management, utilities and infrastructure, business and market analysis, law enforcement, urban and regional planning, and environmental management.

UW-Stout is assessing market demand for a certificate program, possibly at the graduate level, in Project Management. Students in this program would learn how to develop effective project plans and how to plan, budget and control multi-project programs.

UW-Madison will offer a certificate in Alcohol and Other Drug Abuse (AODA) Counseling, coordinated through its Division of Continuing Studies, with support from the School of Social Work. The program will serve human services professionals seeking state certification as AODA counselors.

“Our Flex degrees and certificates don’t sit outside of what goes on in the University, they’re part and parcel of those programs. There’s no asterisk.  That’s what’s generating so much interest,” Brower said. 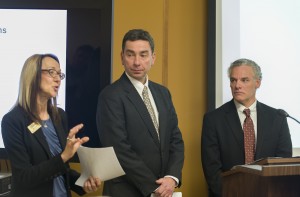 Student Regent Tracy Hribar commended the speed with which the UW Flex initiative has been developed, and thanked the involved faculty members for getting “out of their comfort zone.” Speaking on behalf of post-traditional learners, Hribar said the program has the potential to transform lives. “To give this opportunity to adults who wouldn’t otherwise have it … this is the type of thing that’s really important,” she said.

Hribar also reiterated the imperative to “not to mess it up,” and queried what measures were in place to prevent that from happening.

“We will only ramp up as we have the ability to provide good success,” Brower said. He added that keeping enrollments at a manageable level is also necessary due to current limited capacity as well as the program’s focus on providing strong personal relationships with each student.

As part of his report to the Board, Regent President Mike Falbo provided an update on the search to identify a successor to President Reilly. The Search and Screen committee, chaired by Vice President Regina Millner, will be interviewing a number of semifinalists this weekend, he said. On Dec. 20, that committee will meet with the Regent Selection Committee, which Falbo chairs, to present its recommendations for up to five finalists. The finalists will be publicly announced on Dec. 23.

Interviews with the final candidates will take place on Jan. 6 and 7, and will include an opportunity via video conference for faculty, staff, and community members throughout the state to get acquainted with the finalists. In addition, Chancellors will have time with each candidate, as will members of the President’s Cabinet. If all goes as planned, Falbo said he expects to recommend the next President of the UW System to the full Board of Regents at a special meeting to be held on Jan. 10.

Falbo also reported in early 2014, the Board will be launching a national search to find a successor to UW-Stout Chancellor Chuck Sorensen, who recently announced that he will be stepping down next August. 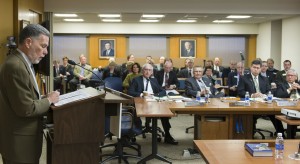 Updating the Board on recent events, President Reilly shared the news that Malcolm Brett, Director of Broadcasting and Media Innovations (BAMI) at UW-Extension, was recently elected the Professional Vice-Chairman of the national Public Broadcasting System Board of Directors, which governs and sets policy for PBS. “This is a high honor for him, and for UW-Extension, and for the University of Wisconsin,” Reilly said.

In providing the Regents with a brief overview of the history, vision and programming of Wisconsin Public Radio and Wisconsin Public Television, Brett noted, “It’s not unusual for a national organization like PBS or the Corporation for Public Broadcasting to look to Wisconsin for leadership. They look to us because of our well-known tradition of service…They look to us because we’re regarded as one of the leaders in how we serve our state with innovative programs,” Brett said.

Reilly also reported that UW System was well represented at the recent annual meeting of the Association of Public and Land-grant Universities, or APLU, in Washington, D.C. Gilles Bousquet, UW System’s Senior Special Assistant for International Strategies, moderated a panel on “Building the Future: The Role of Land-Grant Universities in Leading Globalized Economic Development While Sustaining the Obligation to Serve the Public Good.” Other panelists included Wisconsin State Senator Sheila  Harsdorf, chair of the Senate Committee on Universities and Technical Colleges; Laura Dunek, a dissertator in Educational Leadership and Policy Analysis at UW-Madison (and former member of the UW System legal team); and Tom Still, President of the Wisconsin Technology Council. Reilly participated in another panel at the same meeting, focusing on Competency-Based Education, where UW System’s Flex Option program generated considerable interest.

“It’s heartening to note at these meetings how the University of Wisconsin is looked to as one of the lead 21st-century embodiments of the great American land grant tradition in higher education,” Reilly said.

Reilly also highlighted some news from around the UW System, including UW-La Crosse history professor Victor Macías-González being named the Wisconsin Professor of the Year by the Carnegie Foundation for the Advance of Teaching; and the creation of an online map of state economic development projects by UW-Whitewater students. Reilly also recognized UW-Stout’s Tim Nelson, a four-time national champion in track and cross country, who recently received the 2014 NCAA Today’s Top 10 Award; and student-athlete Jason Church, a graduate of UW-La Crosse, who has received the 2014 National College Athletic Association Inspiration Award. Church was awarded the Purple Heart last year following his service in Afghanistan.

The University of Wisconsin System Board of Regents will next meet on Feb. 6-7, 2014, hosted by UW-Madison.