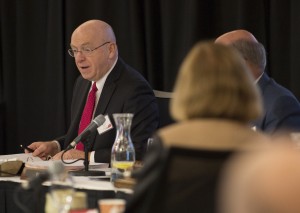 “Holding college costs down helps Wisconsin students and families,” said Cross, who led a presentation at today’s Board of Regents meeting in River Falls highlighting the university’s financial position. “UW tuition is already lower than many peer colleges and universities.

“We intend to thoughtfully and judiciously manage and explain our resources. We will continue to work with the Governor and the Legislature to meet our shared goal of delivering value to the state of Wisconsin,” Cross said.  “I intend to work vigorously to find a reasonable solution. I am confident that we can get the best budget possible for the university.” 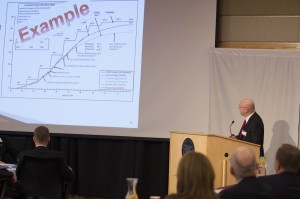 “We’ve had growing fund balances, but nobody really knows what the fund balance should be,” said Cross. Nevertheless, he’s committed UW System to do a better job of forecasting, to make the system’s budget process as transparent as possible. “There should be no surprises,” he said. 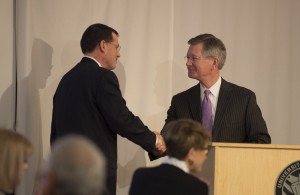 The new approach means taking into account enrollment levels, tuition income, taxpayer funding and other key factors reported quarterly. The way to get there, according to Cross, is to consider multiple financial commitments, such as planned spending and designated funds, and to do so over six years, instead of one or two.

“We’ve been working in slices of time, but we need to complement it with a longer perspective,” said Cross.

President Falbo shared the names of four new Regents who have been appointed by Gov. Walker to serve on the UW System Board of Regents: José Delgado, of Brookfield, retired president and chief executive officer of American Transmission Co.; Eve Hall, of New Berlin, president of the African-American Chamber of Commerce; Nicolas Harsy, of Madison, a junior mechanical engineering major at UW-Madison; and Anicka Purath, of Mount Pleasant, a sophomore political science major at UW-La Crosse. 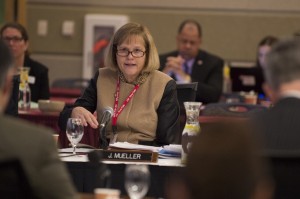 Falbo also updated the Board on the progress of ongoing chancellor searches at UW-Green Bay, UW-Stout, UW-Oshkosh, UW Colleges and UW-Extension, and UW-Milwaukee, and the renewed search for a Chief Audit Executive.

Regent Jan Mueller also reported on the Funding Allocation Work Group, which was charged last December. The group, chaired by Mark Bugher, retired director of the University Research Park, has been working on analyzing the existing model for fund allocation to the institutions, reviewing broad principles on which funding models are based, and alternative resource models, Mueller said.

Following up on his commitment to “listen to the people of Wisconsin,” President Cross provided Regents with a brief overview of recent interactions with students, faculty, staff, legislators, members of the community and business leaders, and others. He also updated the Board on federal issues.

As part of his report on news around the UW System, Cross told Regents that a generous gift to UW-Stevens Point will establish the university’s first endowed faculty position and enhance one of the nation’s largest wildlife management programs. A $2-million gift from Gerald and Helen Stephens honors the memory of their son, Doug Stephens, a 1991 graduate of UW-Stevens Point. The gift will help create the Douglas R. Stephens Chair in Wildlife, a new faculty position in the College of Natural Resources.

Student veteran David Pillman, a sophomore at UW-River Falls, shares his story with the Regents as part of the inaugural Student Spotlight

Cross also introduced his inaugural Student Spotlight: David Pillman, a sophomore at UW-River Falls. Pillman, who served three tours with the Marines including time in Guantanamo Bay, the Middle East, and Afghanistan, is currently enrolled at UW-River Falls, where he is a pre-veterinary science major. He recently purchased the strawberry farm that he’d been working at since age 9. He is also working with Dr. Brian Smith, a professor of Horticulture at UWRF, to develop a new breed of strawberries.

Pillman told the Board that his interest in animal science originally stemmed from his experience growing up in Wisconsin around dairy farms, but was further piqued by helping injured animals while on duty in Afghanistan. “I wanted to be able to help those animals,” he said.

Pillman noted that campus life after years in the Marines required some adjustments, from transitioning to a more sedentary lifestyle sitting in classrooms to figuring out veterans benefits. He said he has worked with the veterans’ services office on the UW-River Falls campus and will be involved in preparing special orientations for UWRF veterans next fall. “It’s a completely different picture coming in as a veteran versus someone coming in from high school,” he said.

“For a Marine, he’s all right,” said Cross, who served in Vietnam.

The University of Wisconsin System Board of Regents will next meet on
June 5-6, 2014, at UW-Milwaukee.