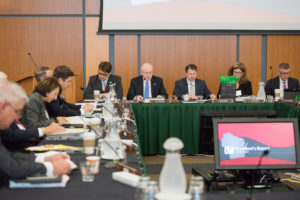 UW-Parkside hosted the Board of Regents October 2018 meeting

Passmore provided the Board of Regents with the second annual progress report on 2020FWD, the UW System’s strategic framework, at its meeting Friday at UW-Parkside.

As part of his report, Passmore noted that UW System institutions conferred a record number of degrees in science, technology, engineering and math, or STEM, disciplines (9,716) and health professions (3,460) during the 2016-17 academic year accounting for over one-third of degrees conferred, Passmore said. In 2011-12, less than one-third (31%) of degrees were conferred in STEM (7,512) and Health (2,992) fields.

In 2020FWD, the UW System crafted a strategic framework for the future of the University of Wisconsin System that is focused on how the university can most directly and effectively help the state prepare for the future. This plan reflects the voices of thousands of Wisconsinites, on campus and off, individuals, legislators, community and business. It was also created with a deep understanding and appreciation of the challenges facing the state. 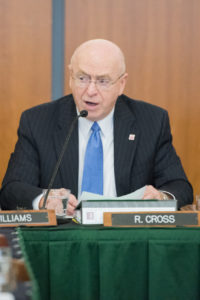 Cross said the institutions are facing the “enrollment headwinds” better than it might appear given high school populations and in comparison to other higher education sectors.

‘Our students are the core of what we do – why we exist – and how we as a public institution of higher education transform Wisconsin. Our impact goes beyond numbers – we see it in individual stories that change neighborhoods, communities, cities, states, and entire economic sectors,” Cross said. 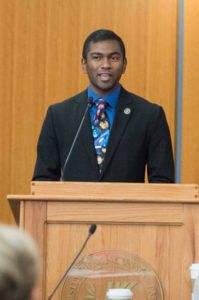 President Ray Cross introduced Siva Shankar, a senior physics major at UW-Parkside, who spoke to the Board as part of a Student Spotlight. Last spring, Siva was voted the best undergraduate presenter at a meeting of the American Physical Society hosted by Ohio State University. His presentation, “Damping of a Simple Pendulum Due to Drag on Its String,” was selected from a field of about 90 presenters from all over the United States, including students from MIT, Caltech, UW-Madison, and UCLA.

As a Kenosha native, Siva said UW-Parkside wasn’t his first choice for a college, and he had been accepted to numerous programs.  But after one meeting with a professor at UW-Parkside he realized how much its professors want students to succeed and “took a chance” on the institution.

In 2014, he was the only physics major on campus, which made him “kind of nervous.” Now there are nearly 30. “The program has grown exponentially,” he said, praising faculty for building the program.

“I achieved these things as a student, but more importantly as a student at UW-Parkside,” he said. “Parkside truly is one of the hidden gems of Southeast Wisconsin, and that’s one thing I’m extremely proud of.”

News Around the UW System

In his report on News from Around the UW System, Cross told Regents about a new App launched by UW-Whitewater to help drive student engagement with access to class schedules, campus resources, advising, calendars, and more on their phones and about how UW-Stout’s supply chain management program helps Wisconsin companies efficiently move their products through manufacturing and distribution.

President Cross told Regents that the Fund for Wisconsin Scholars has awarded approximately 580 new four-year UW System students and 324 transfer students with need-based grants. It is the second year in a row that all eligible transfer students were funded.

The Fund for Wisconsin Scholars is a private foundation established in 2007 by a founding gift of $167 million from John and Tashia Morgridge. It provides need-based grants – which do not need to be repaid — to graduates of Wisconsin public high schools attending Wisconsin public colleges to support their access to and completion of college.

UW System General Counsel Quinn Williams reported to the Board that the UW System’s proposed new policy on personnel files and reference checks is currently in the review and comment phase, and is on track for implementation in January 2019.

Williams noted that UW System is also working with the Department of Administration to clarify procedures and processes for sharing personnel files between UW System institutions and State agencies. The System is also Researching options for electronic storage of personnel files and soliciting feedback and implementation advice from national professional associations.

Mark Walters, UW-Madison Director of Classified Human Resources, said UW-Madison is drafting a campus-wide personnel file policy that is parallel to the System’s policy, and has added a draft reference check policy to its existing hiring process. Engagement with campus stakeholders has also begun at UW-Madison as it prepares for January implementation.

They noted that as of September 1, 2018, the following key transition activities have been accomplished:

The Higher Learning Commission will conduct its next evaluation visit December 3-4, 2018. 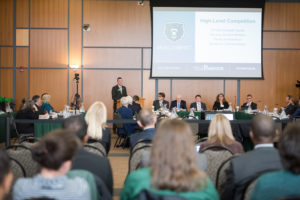 UW-Parkside Director of Athletics Andrew Gavin told Regents that “Life in the Balance” is the philosophical foundation of the Ranger athletics program – the only NCAA Division II institution in the UW System. Season schedules are designed to allow students to pursue academic, work and internship opportunities as well as engaging in campus and community activities while also getting involved in athletics, Gavin said.

The UW System and Board of Regents expressed their condolences to the family, friends and colleagues of Robert M. O’Neil, who passed away earlier this week at the age of 83.  Dr. O’Neil served as President of the UW System from 1980-85. He was also a law professor and a nationally recognized scholar focused on the First Amendment, free speech and the press.