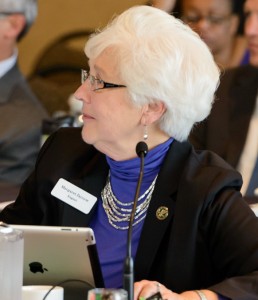 SOMERS, Wis. – The University of Wisconsin System Board of Regents unanimously approved adjustments to the salary ranges for top UW leaders at its meeting Friday at UW-Parkside.

“All of these decisions – the revised policy, the broader ranges, and the individual adjustments – are consistent with this Board’s commitment to competitive compensation for all faculty, staff, and academic leaders,” said Regent President Michael Falbo. “We have given the Chancellors flexibility to reallocate existing resources, wherever possible, to address compensation equity and market gaps. Most campuses have made strategic reinvestments of this kind to retain top talent. That is no substitute for broad, merit-based pay plans, but it makes a difference.”

UW System President Kevin P. Reilly called it an “important” vote, noting that the Regents have advocated for years to acquire more authority over the University’s personnel systems and compensation plans.

“The most important watchdog function that this Board has is to ensure the quality and the reputation of the University of Wisconsin,” Reilly said. “If the Board and the rest of us don’t do that, much of the rest of what we do won’t matter. Essential to that is a competitive pay plan for all of our faculty and staff. We don’t have one now, and we have to find new ways to get to one. We have to do that, in my opinion, much sooner than later.” 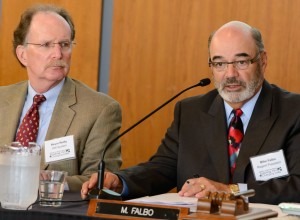 Regent Margaret Farrow reminded the Board that is obligated to consider peer comparisons when setting salary ranges, just as statutes require that other governing bodies set various rate schedules.

“Everyone expects local governments to do that. I think what we should remind people that what we’re doing here is fulfilling a statutory requirement in addressing these ranges,” she said.

Regent President Falbo updated the Board on the wide range of Board members’ ongoing efforts to maintain open lines of communication with members of the legislature, including numerous meetings to discuss important UW policy issues. He also noted recent visits with editorial boards.

He also updated the Board on the status of the search for a successor to President Reilly. He said the ultimate goal is to bring forward a final candidate’s name for the Board’s approval at the January 2014 meeting. 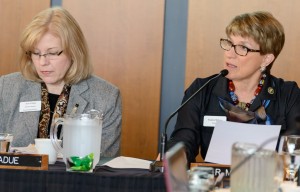 Vice President Regina Millner then led a general discussion on board planning and process. “This is an opportunity for us to focus on whether the changes already made are working for us and what other actions we might like to consider,” she said.

The discussion included feedback from board members on broad range of issues from setting priorities and meeting schedules to Regent orientation and legislative relations. 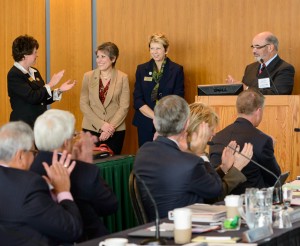 President Reilly provided Regents with a brief update on impact of the federal government shutdown on the UW. He noted that there has been little impact on student aid, largely because Pell grants and federal student loans come from permanent, multi-year funding not affected by the shutdown.

Federally funded research is an area, however, where the university has already seen an impact. Research is a big part of every UW System campus, he said, and “stop work” orders, limited communications, travel restrictions, and awards not being issued are impacting projects and complicating national and international research collaborations.

“For existing federal grants and contracts, UW institutions rely on regular cash draw-downs to cover expenditures,” Reilly said. “At this time, most of those draw-downs have stopped, so those costs are being covered through internal reserves.”

Reilly also shared the news that the UW System has received a $1.2-million grant from Lumina Foundation to assist with the university’s evaluation of the UW Flexible Option.

He noted that Lumina Foundation recognizes “the work that folks are doing here on the Flexible Option as real nation-leading work, and wants our colleagues doing that work to document it very carefully  so others doing similar work will have that road-map to follow.”

Reilly updated Regents on the search for a Chief Audit Executive. He noted that a search-and-screen committee has been charged and final interviews are expected to take place in January, allowing for the new UW System President designate to participate in the final decision.

Reilly also shared news from around the UW System. 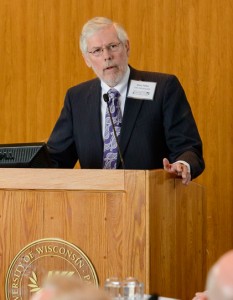 As part of the Board’s continuing series of discussions on UW institutions’ strategic goals, Chancellor Richard Telfer updated the Board on UW-Whitewater’s vision and plans.

Telfer told Regents UW-W’s enrollment is now 11, 993 students, including 10,849 undergraduates. He noted that the university’s second-year retention rate of 80.3% and last year’s 58.3% graduation rates are both institutional highs. He added that Whitewater’s intercollegiate athletics program has been hugely successful, with 15 of its 20 sports programs qualifying for national tournaments.

Telfer told Regents that UW-W’s focus on the broad liberal education values espoused in the national LEAP (Liberal Education for America’s Promise) initiative and its dedication to developing undergraduate student research have had significant payoff. “Students don’t just have a degree – they have a degree with relevant experience,” Telfer said.

Regent John Drew noted that UW-Whitewater’s success speaks to how the investment of public dollars can produce economic development and prepare people for better-paying jobs.

The University of Wisconsin System Board of Regents will next meet on December 5-6, 2013, in Madison.