MILWAUKEE – The University of Wisconsin System Board of Regents on Friday looked ahead to its future, considering factors that will shape its 2013-15 biennial budget recommendations.

Senior Vice President Michael Morgan provided Regents with an overview of the landscape in which they will act on the UW System’s biennial budget in August, stressing several new variables

“The question is, how do we present a plan that is compelling to the Governor and the Legislature to fund us going forward, to make investments in the System,” Morgan said.

He described new performance measures specified by the Legislature in Act 32 (the 2011-13 State Budget), new block grant flexibility for UW institutions, and the new University Personnel Systems being developed.

“A modest investment from state should allow us to keep on the trajectory to meet our objectives… as well as delivering on the performance measures altered by the state,” Morgan said.

He also reminded Regents that the UW’s GPR request from the state will impact tuition decisions in the future, and reiterated that in a period of scarcity, additional resources are needed to sustain a high level of service for more than 180,000 UW students.

Morgan described an improving economic landscape, compared to 2010, when the Regents last discussed a biennial budget proposal. He also pointed to recommendations from the Legislative Task Force on UW Restructuring and Operational Flexibilities, which may be incorporated into the UW System’s budget request in an effort to boost efficiency.

To provide additional context for the Board’s decisions, three chancellors shared their insights on the opportunities and obstacles facing their campuses, particularly relating to economic development efforts.

UW-Whitewater Chancellor Richard Telfer reported to the Board on several initiatives underway at the Whitewater University Park, involving faculty, students, and local business members. Collaboration with Blackthorn Analytics, for example, has resulted in 25 jobs for Whitewater students and graduates, he said.  Telfer said budget cuts have limited the university’s ability to provide additional opportunities for students to be involved in such hands-on experiences, and restrict the ability to engage in research with high potential for commercial application.

UW-Parkside Chancellor Debbie Ford told Regents that the university’s primary role in relationship to economic growth is to provide career-ready talent to regional businesses, and project-based learning is central to that goal. She noted that in the past academic year, more than 300 students had been involved in 84 projects for 73 clients. She cited UW-Parkside marketing students working with Johnson& Johnson and Olive Garden restaurant, for example, and research being done through WiSys to develop improved wheelchair designs. Ford said the continuous budget reductions have made it difficult to implement the university’s strategic plan, and initiatives have been delayed.

Chancellor Bernie Patterson of UW-Stevens Point told the Board that his campus intends to establish an office of economic development, using funds generated internally. He said it’s a matter of “investing money in order to generate new revenues for university.” He added the budget cuts have also forced the campus to close its teaching center, where faculty come together to develop new teaching strategies, which could have long-term impacts.

Morgan told the Board that the UW System will be pursuing additional operational flexibilities in the areas of procurement authority and construction.
Associate Vice President David Miller also presented a summary of the capital budget planning process. He compared the amount of capital spending that might be available in the next budget cycle to the much larger list of UW campus needs. He stressed the need to invest in maintaining current facilities and to renovate older structures more efficiently. 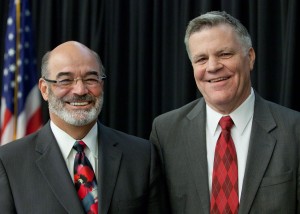 Smith, who has served as a Regent since 2004, has served as Vice President for the past year. He succeeds Regent Emeritus Michael J. Spector in the leadership post. He is an attorney with Johns, Flaherty & Collins in La Crosse.  Smith is past president of the Wisconsin Technical College Board. He received his bachelor’s and law degrees from UW-Madison.

Falbo was appointed to the Board in 2004. He has chaired the Board’s Business, Finance, and Audit Committee, and recently chaired the Legislature’s Special Task Force on UW Restructuring and Operational Flexibilities. Falbo is the former chairman and chief executive officer of State Financial Services Corporation. He earned his bachelor’s of science degree from UW-Parkside. He is also an alumnus of the Graduate School of Banking at UW-Madison, and a veteran of the United States Army, Vietnam Medic Corps. 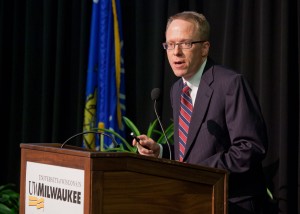 Leaders of two UW-Milwaukee foundations came before the Research, Economic Development, and Innovation Committee to explain how strategic partnerships are evolving to meet the university’s growing needs and driving regional economic development.

Brian Thompson, President of the UWM Research Foundation, provided an overview of UWM’s growing research strengths and how UWM is connecting these strengths with regional partners. This includes industry cooperative centers in water and energy research as well as UWM startup companies that are helping promote a culture of innovation at UWM.

Thompson noted that research at UWM has grown more than 200% in the last decade, to over $70 million. He said UWM is working to grow its research in ways that align with the strengths of the institution and the needs of regional partners. This includes industry partners in water, energy, and healthcare, as well as institutional partners who collaborate in biomedical and clinical research. 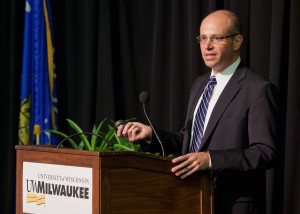 David Gilbert, President of the UWM Foundation and UWM Real Estate Foundation, highlighted how UWM’s Innovation Campus is creating a nexus of discovery, innovation, and economic development by providing a place for university researchers and innovative companies to collaborate across disciplines to create knowledge and transfer technology from the laboratory to the bedside to the commercial marketplace.

Vice President of the Boards Report

With the June meeting coming at the end of the academic year, Vice President Brent Smith offered a brief retrospective on some of the Board’s actions in the past year.

He noted that a number of Regents had participated in the President’s Advisory Committee on the Roles of UW System Administration, which was convened by President Reilly and chaired by Regent Chuck Pruitt. Other committee members included Regent s Jeff Bartell, Judy Crain, and Smith, as well as Regent Emeritus Jay Smith.

Smith reminded the Board that one of the many recommendations by that committee was to devolve flexibilities and responsibilities from the State to the UW System and to UW institutions. President Reilly had accepted the committee’s recommendations and presented an implementation plan to the Regents last September, which they endorsed.

In the past year, the Board also formed two Ad Hoc working groups, Smith said, one to review the UW System Board of Regents Roles and Responsibilities, and the other to review UW System Governance and Structure.

Looking at events elsewhere that impact the UW, Smith noted the ongoing discussion in Washington, D.C. regarding plans to postpone the scheduled doubling of the 3.4% interest rate on subsidized federal student loans. He reminded Regents that in 2010-11, nearly 82,000 US students – including 69,000 resident undergraduates – took advantage of that program, borrowing over $370 million in subsidized federal loans.

“At this time when there is growing loan debt for student borrowers and economic hardships for parents and students, we hope Congress will maintain the current student rates for our undergraduates,” Smith said.

In the wake of commencement ceremonies at UW campuses all across the state, President Reilly shared with the Board three ways that the UW System is helping to increase the number of graduates.

Reilly noted that last month, working with the UW HELP staff at UW-Extension, he sent a letter to 8,000 Wisconsinites who had previously attended a UW institution but had not completed a degree. In that letter, he invited them to come back and complete their associate’s or bachelor’s degrees.  Reilly told Regents that since this outreach effort started in 2007, more than 7,500 applications to UW institutions had been received from this pool.

Four UW institutions – UW-Green Bay, UW-Platteville, UW-Stevens Point, and UW Colleges – are among 64 institutions in nine states that are participating in Project Win-Win, which seeks to identify former students who withdrew from college for varying reasons but whose academic record already qualifies them for an associate degree.  Reilly noted that UW-Stevens Point presented more than 140 students with their retroactive associate degree at last month’s commencement ceremony.

Third, Reilly told the Board that a key advancement has been made to the Veterans Educational Portal, adding a “mobile” version of the website so that veterans have access to higher education resources through their smart phones and other mobile devices. That Portal was first launched in November 2010 to help veterans make the transition from military service to college life. “Our goal is to make higher education as veteran-friendly as possible,” Reilly said.

Due to time constraints, Reilly told Board members that he would share his UW System news report separately.

Regent Mike Falbo, chair of the Legislative Task Force on UW Restructuring and Operational Flexilities, provided the Board with a brief update on that task force’s recent meetings.
In May, the task force heard presentations on a variety of concerns from students, faculty, academic staff and operational/classified staff. It also discussed recommendations regarding Governance, Articulation and Credit Transfer, and UW Required Reports.

At last Wednesday’s meeting, the Task Force discussed recommendations regarding personnel systems and compensation plans, tuition authority, and capital planning and procurement flexibilities.
“There is a lot of legislative involvement in everything we’ve talked about,” Falbo said. “I’m optimistic that these items will go forward.”

In other business, the Board

The UW System Board of Regents will hold its next meeting August 23-24, 2012, in Madison