MILWAUKEE, Wis. – The University of Wisconsin System Board of Regents honored this year’s recipients of the Academic Staff Excellence Awards at its meeting today. These awards recognize exceptional service to the university and are the UW System’s highest recognition bestowed on members of its academic staff. 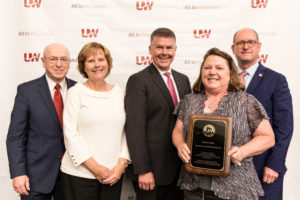 The 2019 recipients include two individuals and one program:

“When it comes to solving veterans issues, we work together,” said Koltz, who is widely respected for her knowledge of complex student veteran education benefits and her dedication to helping students succeed. She told Regents her group has been “blessed to have strong leadership support from UW-Green Bay.” Koltz added, “The military taught me how to be a team leader” and recognize people’s strengths and weaknesses to benefit the mission.

“I often joke that my home away from home is not just UW-River Falls, but in the dumpsters of UW-River Falls – making sure items are disposed of properly,” said Klapatch, who oversees a staff of 17 full-time employees and 60 to 70 part-time student employees. “The work of sustainability is never ending. There are always a variety of things we’re always trying to improve.” 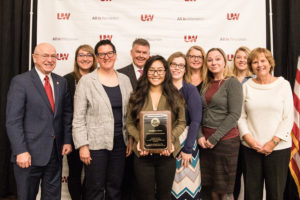 Anna Stadick, the library’s current director, said her staff of librarians are especially adept at “surfing the wave of change, an attitude that is enormously advantageous.” She added that they are “talented, well-prepared, student-centered, tech-savvy, generous and hard-working.” As campus persistence and graduation rates continue to improve to historic levels, the library has been an essential part of this success.

The Board of Regents elected Drew Petersen to a one-year term as president. The vote was unanimous. Petersen, who earned an MBA from UW-Madison, succeeds John Robert Behling, whose term on the Board ended in May. The Regents also elected Michael M. Grebe as vice president. 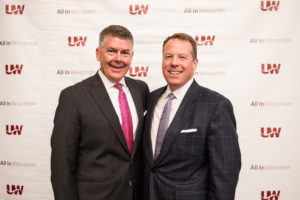 (from left) Petersen and Grebe

Petersen is active in the civic community of Madison and the state of Wisconsin. He is past president of the Wisconsin Technical College System Board of Directors, the Madison Club, and the Wisconsin State Telecommunications Association Board of Directors. Petersen earned his Master of Business Administration from the UW–Madison and Bachelor of Arts in History and Leadership Studies from Ripon College in Ripon.

Regent Grebe has served on the Board since 2015 and is the Chief Legal Officer for Aurora Health Care, the largest integrated health care system in Wisconsin. He has also served on the boards of various organizations, including Columbia St. Mary’s Hospital, the University School of Milwaukee, and the Zoological Society of Milwaukee. Grebe graduated from Dartmouth College and earned his law degree from the UW-Madison Law School.

Reports of the Board Vice President and System President

In an update on the search for the successor to UW-Stout Chancellor Bob Meyer, Regent Vice President Drew Petersen told the Board that the Special Regents Committee, chaired by Regent Jason Plante, has now approved the chancellor position profile and the recruitment phase is officially underway. The target date for applications is Sept. 13.  Petersen also noted that UW-Whitewater has named a new chancellor, Dwight C. Watson, currently the Provost and Vice President of Academic and Student Affairs at Southwest Minnesota State University. Watson starts his new position on Aug. 1.

In his report, President Cross said focus continues on the state budget process. He noted that the top priority is to continue to advocate for an operating budget that supports the vital work UW System does every day to meet the needs of the state.

The UW System is also committed to securing a reasonable and solid capital budget. “While our capital budget request is historically large, now is the time to repair and renovate aging classrooms and buildings,” said Cross, noting that over 60% of UW System’s physical infrastructure is between 45 and 70 years old. “We will continue to advocate with lawmakers to clearly spell out these needs, their urgency, and this opportunity.” 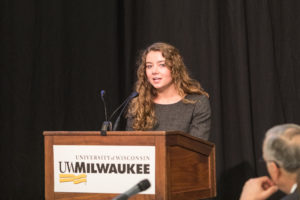 Expecting to graduate in December, she did her field work this past spring in a South Milwaukee elementary school. She plans to go into teaching areas of greatest need, as a kindergarten or first grade teacher or as an English as a Second Language teacher.

Molinski said advocacy was another important part of her time at UWM. “Representing students and working close with administration to make real changes was very rewarding,” said Molinski, who served as President of UWM’s Student Association this past year.

As part of Cross’s report on News from Around the System, Regents heard about Brent Coulthart, who inspired other veterans and students when he recently graduated from UW-Stout. Out of money, he dropped out of college a decade ago in Minnesota, then served five years in the Marines as a helicopter mechanic. Using military and disabled veteran benefits, he returned to school and overcame dyslexia with on-campus support to earn a degree in business administration. 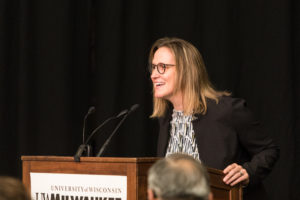 Braun told Regents the past year was highly successful for Panther student athletes, noting that UWM student athletes have now tallied 38 consecutive semesters with at least a 3.0 GPA. She also noted the current graduation rate is 92%, up from 71% five years ago.

UWM sponsors 15 varsity sports, providing approximately 300 student-athletes with the opportunity to participate in college athletics. UWM competes in the Horizon League. During the 2018-19 season, UWM claimed a pair of Horizon League titles, with the women’s cross-country team and women’s soccer team bringing home championship trophies. Overall, 10 teams finished in third place or better in either regular season or league tournament. 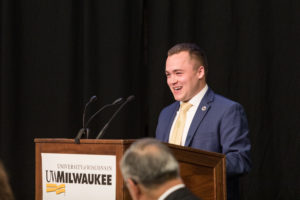 Regent Emeritus Ryan Ring was recognized for his service on the UW System Board of Regents. Ring, a first-generation college student from Green Bay, recently graduated from UW-Eau Claire as a finance and political science double major.

Ring expressed his gratitude for the generous attention he’d received in the course of his “incredible journey” of the past two years. “Thank you for inspiring me to work hard and listening to a college kid,” he said.

Ring said he was gratified to have played a role in the Board’s work to make sure tuition stays affordable for students, address sexual harassment on campuses, and to keep the Wisconsin Idea alive by restructuring the UW System. “How fortunate am I to have been part of this great institution and to play a small part in Wisconsin’s future success,” Ring said.

The University of Wisconsin System Board of Regents next meet on July 11-12, 2019, in Madison.