University of Wisconsin System Board of Regents October Meeting, Day One News Summary

MENOMONIE, Wis. – The University of Wisconsin System Board of Regents considered new expanded reporting procedures for athletics programs at UW System institutions, at the Board’s meeting Thursday at UW-Stout.

UW System President Kevin P. Reilly told Regents that it is a “strong priority” to uphold the integrity of UW’s athletics programs, “preserving public trust and confidence in every element of campus operations.” 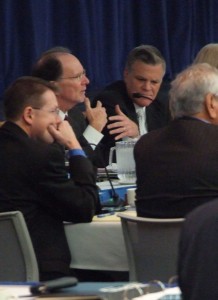 Reilly acknowledged that college athletics programs nationwide have received additional scrutiny in the wake of the recent Penn State child abuse situation, but he reassured the Board that there is no “smoking gun” compelling the UW System to address the issue at this time.

“There is nothing prompting this discussion other than a recognition of the changed environment post the Penn State tragedy, and this Board’s desire to do its job in an ever more transparent and effective way. I think it’s called ‘continuous improvement,’” Reilly said.

As Board of Regents President Brent Smith noted, it falls to the Board, as the university’s governing body, to ensure that appropriate and adequate policies and processes apply in all areas of university operations.

“The intent is not to remove any decision-making authority from the Chancellors, who bear direct responsibility for overseeing their own athletics programs,” Smith said. “This action is simply a forward-looking process that will facilitate consistent information sharing and oversight across the UW System.”

According to NCAA bylaws, an institution’s chancellor is responsible for the administration of all aspects of the athletics program, including approval of the budget and audit of all expenditures. While the NCAA bylaws don’t explicitly assign responsibilities to governing boards relating to oversight of intercollegiate athletics, the NCAA has supported recommendations made along those lines by the Association of Governing Boards.

Michael Morgan, Senior Vice President for Administration and Fiscal Affairs, told Regents that the recommended new reporting process includes annual presentations to the Board of Regents; periodic reviews of significant financial arrangements and compensation agreements; an annual certification letter; and protocol requiring violations be reported to the Chancellor.

Elizabeth Dionne, UW System’s Director for the Office of Operations Review and Audit, told Regents that the new reporting framework would help increase understanding of matters related to academics and student-athlete welfare, financial matters, compliance, and other relevant information such as competitive achievements.

Regent Regina Millner, who currently sits on the UW-Madison athletic board, noted that the existing reporting to that board is very detailed and encompasses an even broader range than that being brought before the Board of Regents. “The involvement and oversight by (athletic) board members is active, involved and rigorous,” Millner said, adding that she would encourage Regents to rely on their work.

While Regent José Vásquez suggested the Board must be cognizant of its ultimate liability as the university’s governing body, Regent Mark Bradley cautioned against the Board inserting itself into a campus responsibility.

“We have oversight ability, but we don’t run those campuses,” Bradley said. “We have a CEO responsible for reporting to us.”

Regent Edward Manydeeds suggested that requests for additional reports from the campuses may not align with the recent focus on delegating greater flexibility to institutions.

Regent Chuck Pruitt noted that the Board needs to educate itself on what the appropriate level of oversight should be. “There are no doubt equal dangers in being on too high a level so as to be simply getting formulaic reports that mean very little … and equally, micromanagement of the athletic departments and athletic programs… constraining the appropriate role of the chancellor who is ultimately responsible,” Pruitt said.

UW-Madison Vice Provost Darrell Bazzell called the reporting protocol being outlined for the Regents “fair and appropriate.”  Noting that most of the information requested is already collected and presented to the NCAA, he added, “We’re certainly comfortable with what’s being suggested.”

Barry Alvarez, UW-Madison’s Athletic Director, told Regents that he understands why the Board would want additional reporting, given that three Big 10 schools have been put on probation in recent years. “We’d be glad to come here and make a presentation to you and be open to questions,” he said.

President Reilly noted that in the past, UW System and the Board have delegated oversight for athletics entirely to chancellors. “I think we are stepping into a new relationship,” he said.

Hosting a Board meeting for the first time in seven years, Chancellor Chuck Sorensen led a presentation, “Transforming a University: Twenty-Five Years of Moving UW-Stout Forward.”

Sorensen, who has been at UW-Stout’s helm since 1988, recounted for Regents some of the significant changes that have taken place, including winning the Malcolm Baldrige National Quality Award in 2001. “Winning the Baldrige has transformed who we are. Everything we do, we see through the Baldrige lens,” Sorensen said.

Other important changes include establishing the e-Scholar or laptop program in 2001 after a two-year pilot program; maintaining the university’s high job placement rate for its graduates of 98 percent; and establishing the Discovery Center to encourage applied research.

The chancellor also highlighted a new economic impact study conducted for UW-Stout that showed UW-Stout contributes about $294 million to the local economy, including about $179 million from the skills its graduates bring to the workplace. The report also indicated that UW-Stout students see a 15.3 percent rate of return on their investment at UW-Stout, while taxpayers see a 7 percent return.

As example of UW-Stout’s active internship program, Sorensen introduced Justin Nelson, a UW-Stout junior from Rhinelander, who shared some of his cooperative education experiences at the NASA Langley Research facility in Virginia. “Because of Stout, I had one of the most amazing summers ever,” Nelson said. “Being able to put NASA on a resume is not going to hurt anything.”

As Sorensen noted, it’s about “blurring the lines between learning and the real world.”

Finally, Chancellor Sorensen described his vision for the future of UW-Stout, which includes establishing an e-College, building a $60-million foundation, achieving 100 percent participation in experiential learning, and reducing the time-to-degree to 120 credits for all programs.

Regent Katie Pointer, who recently spent time on the Eau Claire campus to learn more about the project, reported that everyone she talked to was excited about it. “This is an incredible thing for the campus and the community” she said.

Regent Edward Manydeeds said the proposed project captures and respects the hundreds of years of culture and trade that took place at this junction of the Chippewa and Eau Claire Rivers. “I see this as a perfect way of honoring the sacredness of that spot,” he said.

“A lot of details still need to be worked out,” said Regent John Behling. “A ‘yes’ vote tells the community we want to take this important step. This project makes very good sense.”

Regents hear update on UW-Stout residence halls
UW-Stout Vice Chancellor for Administrative and Student Life Service Phil Lyons gave a presentation on the long-term renewal program to revitalize the residence halls on campus. Lyons detailed the ages of the current residence halls, most of which were built in the 1960s. He said that the halls are deficient in a number of areas, including infrastructure problems, and lack the amenities that today’s students expect.

To address these problems, Lyons said, the university collected data and conducted surveys to develop a master plan for residence hall renewal. An architectural firm was hired to develop options.  It was determined that the best solution was to pursue renovation and remodeling of existing halls rather than to build new, Lyons said, based on cost, lack of available space on campus, and sustainability.

A phasing sequence was developed, he said, and is in the process of being implemented. The first projects were conducted on the north campus, with two projects just approved by the Board of Regents on the south campus. The total cost of the projects will be about $100 million and will be paid for by residence hall fees, Lyons said, and the goal is to keep rates among the lowest in the UW System.

When the projects are completed, Lyons said, UW-Stout students will have renovated residence halls that will serve students and the campus for many years to come.

In other action, the Capital Planning and Budget Committee:

Senior Vice President Michael Morgan provided an overview of the University’s newly formed Office of Economic Development function and its mission. He also outlined the collaborative partnership that the UW System has established with the Wisconsin Economic Development Corporation (WEDC) in order to identify and coordinate linkages between the UW System and WEDC’s strategies of business and industry support, entrepreneurial growth, and international business development.

“Our energies will be directed outward as we connect with a wide range of stakeholders,” Morgan said.

David Brukardt, Associate Vice President for Economic Development, urged Regents to be actively involved. “Everybody’s watching what we’re doing, and some of this process will require you to put your arms around it as you’ve already done by putting this committee together.”

“Whatever programs we put in place have to support the high level of economic development that already exists and is already under way. It’s happening on our two-year campuses, on our four-year campuses, and complementing that is the amazing amount of research at UW-Milwaukee and UW-Madison and the business development activities and entrepreneurial programs through UW-Extension.”

Interim Provost Mary Hopkins-Best gave a presentation to the Education Committee on ways UW-Stout is trying to advance education in the fields of science, technology, engineering and mathematics. The presentation centered on outreach and collaboration, education innovation and applied research and economic development.

Hopkins-Best also told Regents about the goals of the applied science scholar, including recruiting and retaining under-represented students, enhancing student learning, integrating diversity into the curriculum and developing a model for replication. The applied science freshmen community, she said, achieved a 9 percent increase in under-represented students in the first year, as well as an 85 percent retention rate.

Committee updated on UW Flexible Degree Model
As part of its update on the ongoing development of the new UW Flexible Degree model, the Education Committee heard that President Reilly and UW-Extension Chancellor Ray Cross have convened a Flexible Degree Model Faculty and Academic Staff Committee, composed of representatives from every UW institution. That committee will work to identify the necessary components of the competency- and learning outcome-based approach of this degree model.

Reilly is also convening an administrative advisory group for the Flexible Degree program, composed of chancellors, provosts, student affairs administrators, and chief business officers. That group will advise the development process in terms of the business model and infrastructure necessary to support the institutions and students who will enroll in those degree programs.

Morgan also discussed the significant changes underway in how UW System institutions obtain network services. Recent changes in State law required the University to remove itself as a member in WiscNet, the cooperative non-profit organization which currently provides these services to UW System institutions and other education, government, and non-profit entities.  As a result, the University will be required to secure network services through other means.

The UW System Board of Regents will resume its October 2012 meeting at 9 a.m. on Friday, October 5,
at UW-Stout