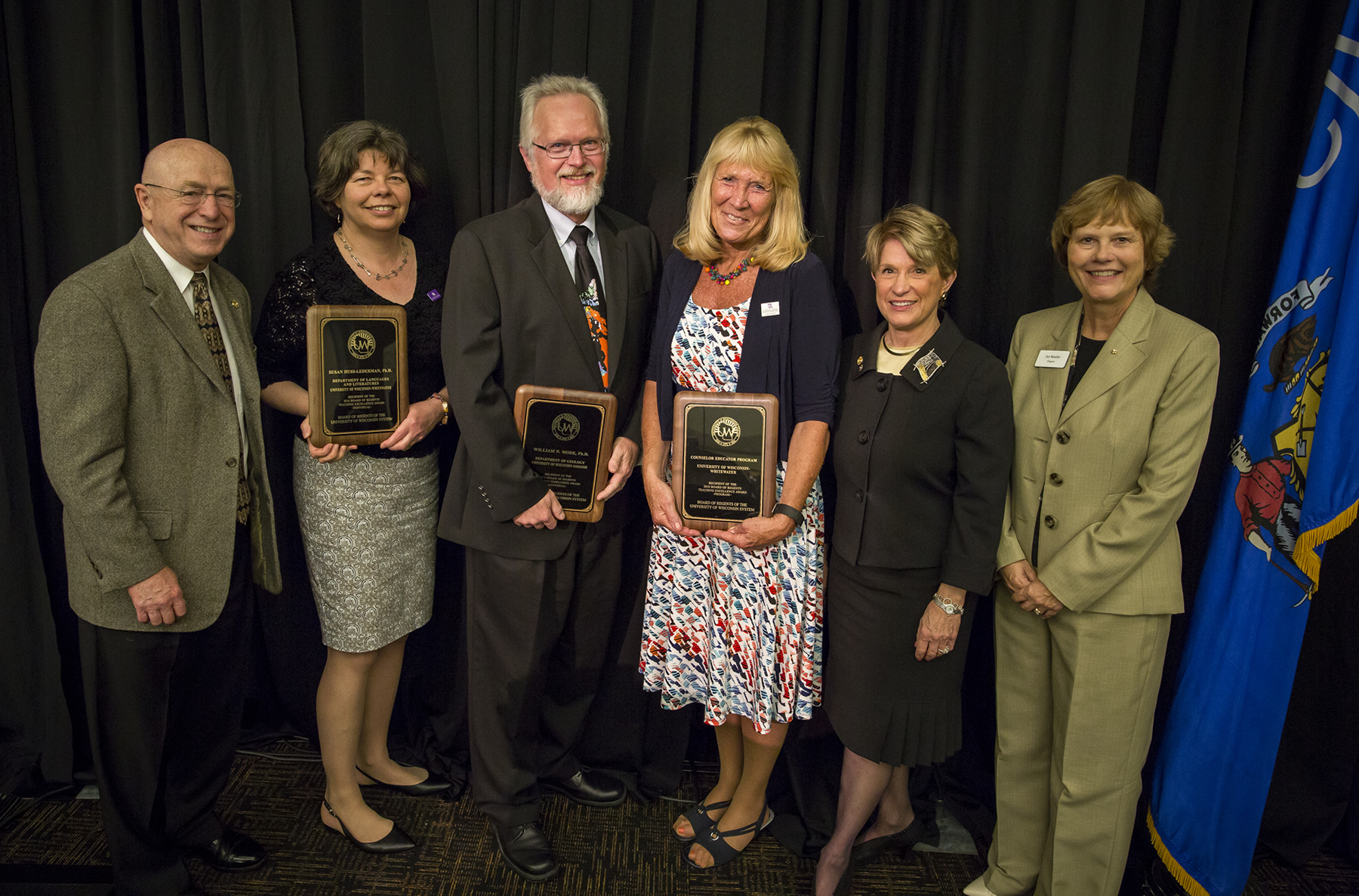 MILWAUKEE – The University of Wisconsin System Board of Regents honored two professors and one academic program for their outstanding achievements in teaching, when they bestowed the UW System’s highest recognition for members of its faculty and academic staff at Friday’s meeting at UW-Milwaukee. 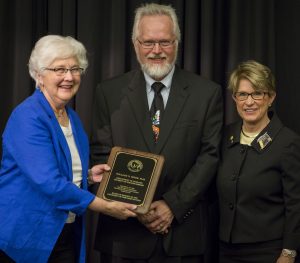 The 2016 recipients of the 24th annual Regents Teaching Excellence Awards are:

Award recipients were selected for their strong commitment to teaching and learning; use of effective teaching strategies to enhance student learning; and significant impact on students’ intellectual development.

“Receiving an award for doing what I love almost seems unnecessary. I look forward to going to work every day,” said Mode, who has been a faculty member in the Department of Geology at UW-Oshkosh for 35 years and department chair since 1999. “Seeing students learn and grow is the other great joy of my job.” 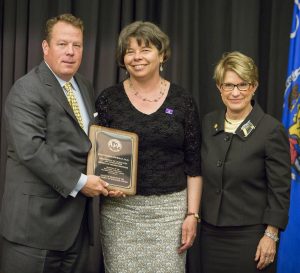 “Getting students to think, talk and write about geology develops skills — observation, critical thinking, communication and synthesis — that they will use no matter what they do in life,” Mode said.

Huss-Lederman, who has primary teaching responsibilities in Applied Linguistics and Teaching English as a Second Language (ESL), told Regents that she made a promise to herself when she began teaching at UW-Whitewater 21 years ago that she would honor the trust that students and often parents have in higher education.

“I have done this by carefully asking and listening and observing and noticing when students do well and where they need differing degrees of structured guidance,” Huss-Lederman said.

She said that students who overcome great odds to achieve “help keep me going and make me realize the power we have” as effective role models. Huss-Lederman noted “the ripple effect of our work in preparing teachers is wide.”

Department chair Brenda O’Beirne, who accepted the program award on behalf of the UW-Whitewater Counselor Education program, said teaching and learning is a partnership. 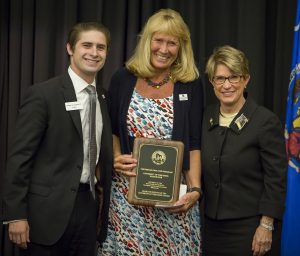 “As faculty, we partner with students to help them achieve the goals that are theirs to achieve. We want to help students develop the knowledge and skills that they will need to serve the world and make it a better place,” O’Beirne said.

“Learning requires reflection, and we require our students to do a lot of reflection, both personally and professionally,” she said.

It is estimated that the UW-Whitewater Counselor Education program has prepared more than 1,370 professionally trained counselors, with the vast majority working within the state of Wisconsin. 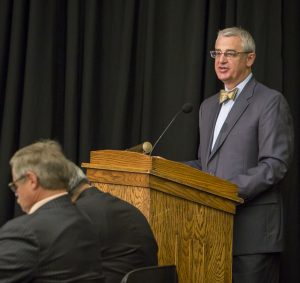 David Miller, UW System’s Vice President of Administration, provided Regents with details about the newly named Commitment to Operational Reform and Effectiveness (CORE) Project, a commitment to streamline and centralize administrative operations throughout the state, including human resources, information technology, purchasing, and budgeting operations.  The initiative was launched by President Cross in 2014.

The project has the shared goal of improving effectiveness and efficiency, Miller said. He noted that the System has a shared financial system, common payroll and benefits systems, and many other shared resources that leverage the power of a system.

“We also have many uncommon systems and manners of operating. This project is about seeking an equilibrium between adding value and greater standardization of shared services with balancing and maintaining the distinctiveness of each campus,” he said.

As part of its annual Division I NCAA report to the Board, UW-Milwaukee athletic director Amanda Braun told Regents that the Panthers had some significant athletic successes this past year. In addition, its student athletes have now posted 31 consecutive semesters with a 3.0 or higher average GPA.

She also told Regents that gifts and pledges topped $1 million, with a record number of donors – an important trend given declining GPR support. “We’re seeing people step up and want to be part of Panther excellence,” Braun said.

As part of her regular report to the Board, Regent President Regina Millner called UW-Milwaukee’s recent designation as a Research-1 institution “an historic achievement for this university and for the UW System.”

“This important step into the future could only have happened through key collaborations between the UW-Milwaukee campus community, the Board of Regents, UW System leadership, the business community, K-12 partners, non-profit agencies, and legislators, all working together for the benefit of families in Milwaukee and throughout Wisconsin,” Millner said.

Millner also provided updates on the administrative code updates, the Tuition-setting Policy Task Force and the forthcoming Campus Climate Task Force. She noted that several campuses have started holding briefings in recent weeks about the impact budget cuts are having on their campuses, with more forums in the works.

President Ray Cross called Regents’ attention to a new report recently released by the Wisconsin Technology Council, “The Value of Higher Education to Wisconsin’s Economy.” “The report reaffirms UW System’s critical role as an economic engine in the state and makes the case that further cuts in public support for higher education in Wisconsin will, in fact, harm the state’s economy,” Cross said.

He also provided updates on the re-posted position description for Special Assistant to the President for Diversity and Inclusion, the recent Posters in the Rotunda event, and ongoing legislative engagements.

As part of regular report on news from around the UW System, Cross noted that UW-Stevens Point has launched its first-ever capital campaign, with a goal of raising $30 million by June 2019. More than $17 million in commitments and gifts have already been made toward the goal. 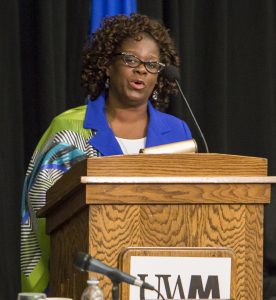 Rosetta Washington, an undergraduate nursing major and nontraditional student at UW-Milwaukee, was featured in President Cross’s Student Spotlight. After working in the nursing field, she returned to college and was accepted into the Ronald E. McNair program at UW-Milwaukee last year, where, she told Regents, “I was introduced to the world of research.”

She is currently working with Associate Professor Lucy Mkandawire-Valhmu on increasing healthy birth outcomes for African American women in Milwaukee. “I am so excited about this research because it can lead to a decrease in the African American infant mortality rates that have plagued our state,” Washington said. Her work was featured at the Posters in the Rotunda event in Madison in April.

In August, through a grant from UWM’s Office of Undergraduate Research and the Center for International Education, Washington will accompany Dr. Mkandawire-Valhmu to Malawi where they will be conducting research on the needs of HIV positive patients.  “Truly, I am blessed to be a part of research that will lead to healthy living for those people who live in impoverished communities in our world,” Washington said.

The Board of Regents approved UW institutions’ promotions and tenure designations.

“This is the time to celebrate the accomplishments of our talented faculty members and acknowledge the long, rigorous path that has led to earning tenure in the UW System,” said President Millner.

She noted that over 50% of newly tenured faculty are in disciplines that support the State’s high need for graduates in STEM, health care, and business. 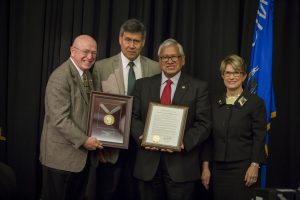 Regent Vásquez, who had served on the Board for eight years, urged Board members to look beyond the traditional symbols of the university – its buildings, institutions, programs, and even great students – to recognize the countless UW System employees, at all levels, who make it happen.

“It takes many people to make a great system. It could not be accomplished without the employees. And regardless of their roles and responsibilities, they are committed to excellence, conducting their work in an effective and efficient manner,” Vásquez said. “I implore the Regents to open the door of communication to employees even further.”

Nic Harsy, who served the past two years as the non-traditional Student Regent, had returned to UW-Madison after serving five years with the Marine Corps, including tours of duty in Afghanistan. Addressing the Board, he specifically singled out the UW’s faculty and staff. 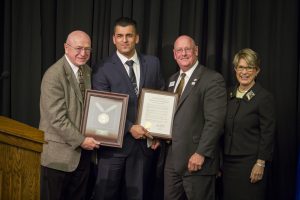 “You are a critical element to this university. You’re the ones cultivating the future, you’re the ones interacting with students, challenging them, mentoring them, and unlocking their potential to achieve greatness,” Harsy said. “For all your hard work and dedication, I thank you.”

Harsy also saluted his fellow student veterans for their dedication and sacrifice, knowing first-hand that it isn’t easy to transition from combat to the classroom.

Millner was appointed to the Board by Gov. Walker in 2012. Her career as a lawyer and consultant in commercial real estate spans more than 30 years. Millner also has served in leadership positions on the boards of many corporations, both for-profit and not-for-profit, including the Wisconsin Alumni Association, UW-Madison Athletic Board, Wisconsin Real Estate Alumni Association, Chazen Art Museum Council, and the Chancellor’s Advisory Board.

Millner earned her law degree from the University of Wisconsin Law School, a Master of Science in Real Estate and Urban Land Economics from the UW-Madison School of Business, and a bachelor’s degree in education from University of Nebraska-Lincoln.

Behling has served on the Board since 2012. He is an attorney and vice president with the Weld Riley law firm in Eau Claire, where he advises on regulatory, environmental, zoning, permitting and public relations matters. Behling recently returned to the firm after a one-year leave of absence to work as general counsel and executive vice president of Regulatory Affairs for Smart San, Inc. He previously served as an aide to Gov. Tommy Thompson in both Washington, D.C., and Madison, Wis.

The University of Wisconsin System Board of Regents will have its next meeting on Aug. 18-19, 2016, in Madison.