Outstanding UW academic staff honored by Board of Regents

MADISON—Two academic staff members known for providing outstanding service to students in the University of Wisconsin System were honored Friday (May 11) with the 2007 Regents Academic Staff Excellence Awards.

This year’s recipients of the Regents Academic Staff Excellence Award are:

Regent Eileen Connolly-Keesler of Oshkosh said the award recipients were selected for excellence in performance, personal interaction, initiative and creativity, and outstanding achievements. 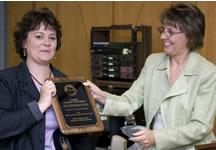 Salmon-Stephens has initiated and implemented more than 20 initiatives and programs in the Women in Engineering Program and the Engineering Advising Office. She has also created a database to track statistics of women in the College of Engineering, Mathematics and Science, and is regularly consulted for advice by both faculty and students, Connolly-Keesler said.

“Tammy has consistently excelled at her work since her employment began in 1997,” Connolly-Keesler said. “Her motto is to be available to colleagues and students, and she creates that welcoming environment in her office.”

Salmon-Stephens thanked UW-Platteville Chancellor David Markee and Provost Carol Sue Butts for giving her the opportunity to work at UW-Platteville.

“I truly believe that one of the key starting points for me was attending one of the UW campuses,” said Salmon-Stephens, who is a graduate of UW-Platteville. “Without this wonderful education system, college may have been unaffordable to me. I am so very proud to say that I have graduated from a top-notch engineering college.”

She said she is passionate about providing advocacy and support for students, and thanked the Board of Regents for recognizing that professional staff who work outside of the classroom add significant value to students’ education.

“College education is such a critical time of growth, and I feel very privileged to work with all of our college students,” she said. 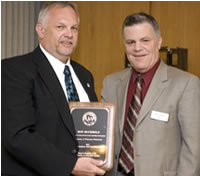 Regent Brent Smith of La Crosse presented the award to Buchholz, who is a 23-year veteran of UW-Whitewater. Buchholz is a two-time recipient of the Academic Staff Excellence Award for Non-Teaching Academic Staff (1994 and 2006) and the Academic Staff Recognition Award (2001 and 2005). UW-Whitewater students also nominated Buchholz for the Campus Outreach Opportunity League’s (COOL) “Leader of Leaders” Award, which he received in 2000, Smith said.

“He is viewed as a true collaborator,” Smith said. “It’s clear that Ron is one of the most respected leaders on our campuses.”

Buchholz is involved in multiple committees and task forces at UW-Whitewater, has developed leadership development opportunities, and encourages students to participate in community service in the Whitewater area. Buchholz’s accomplishments reflect his personal philosophy of choosing to make a difference and building on a legacy of success, Smith said.

“This award means a great deal to me,” Buchholz said. ““When ever I get more administrative and lose connections with students, I feel like I lose my magnetic north. None of us do this for the awards. We do it because there’s passion in our hearts about how we serve students.”

Connolly-Keesler chaired the awards selection committee, which included Regents Danae Davis of Milwaukee, Milton McPike of Mazomanie, Jesus Salas of Milwaukee, and Smith. The annual awards go to non-instructional academic staff members in recognition of their exceptional service to the university. The awards include $5,000 designated to support the recipients’ professional development or for other activities approved by the recipients that enhance a university program or function.

Noting the difficulty in selecting just two winners from the pool of nominees from across the UW System, Connolly-Keesler said the Board intends to grant three awards next year.

The U.S. Department of Education is pursuing changes to federal law that could mean dramatic changes for higher education, the Board learned Friday.

“The issue is that these changes could give the federal government unprecedented control over academics at colleges and universities — academic decisions that are now properly entrusted to faculties, chancellors, presidents, and governing boards,” said UW System President Kevin P. Reilly. 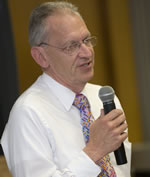 A federal commission is expected to soon propose new national regulations that could require colleges and universities to adhere to new mandates for testing and accreditation, UW-Madison Chancellor John Wiley told the Board.

Some of the rules could be similar to the regulations imposed on K-12 schools through the national No Child Left Behind Act, he said.

“These rules are, in effect, a federalization of higher education,” said Wiley, who chairs the Council on Higher Education Accreditation (CHIA). He said part of CHIA’s focus is to warn the public about fraudulent universities that inappropriately offer college credits.

“Each of the recommendations, applied to the right schools, would make sense,” Wiley said. “Applied to all schools, it’s nonsense. If we’re all treated as one in the same, as the federal government is trying to do, we do no one any good. This is a colossal windfall for the testing industry, which has been heavily lobbying.”

Wiley said that the only member of the federal commission to oppose the direction of the proposed rules was David Ward, a former UW-Madison chancellor and now President of the American Council on Education, which represents colleges and universities in Washington, D.C.

Regents voted to work with the Association of Governing Boards to communicate their concerns about these proposals.

More than 31,000 students are expected to graduate from University of Wisconsin System campuses this academic year, President Reilly reported Friday.

“These graduates are among the UW’s greatest contributions to the state,” Reilly said. “If history holds true, more than 80 percent of the Wisconsin students who will graduate this year will stay in Wisconsin to live and work. This year’s graduates are fine examples of the who, the what, and the why of our Growth Agenda for Wisconsin.”

He said he and other UW System representatives testified last month before the Joint Finance Committee about important UW capital projects slated for funding in the biennial budget.

“We told the committee that quality facilities, where students live and learn, are important to make sure that students have a good educational experience,” Reilly said. “These building projects are very important if we are going to be able to attract students and achieve the goals in our Growth Agenda, and many of them have been on the drawing boards for quite some time.”

Regents forwarded only the most vital projects for consideration by the Legislature, he said.

Reilly also said that legislators and others participated in “Posters in the Rotunda,” a showcase of undergraduate research, and “Spirit Day,” which combined featured more than 400 students, alumni, and other representatives from around the state.

“This is really a wonderful event, and the students who are there, and the faculty mentors who come with them, are so enthusiastic about their research – it’s a really heartening day,” he said.

He said UW representatives also testified at a Joint Audit Committee hearing about UW’s ongoing efforts to create a directory of university economic development resources, a follow-up from a recent audit on economic development He added that he also presented information to the Senate Committee on Agriculture and Higher Education about the “Growth Agenda for Wisconsin.”

In addition, Reilly said he intends to continue to engage legislators as the UW System progresses with a strategic planning process.

Regent President David G. Walsh of Madison reported that eighth-grade students around the state have been signing a pledge to participate in the Wisconsin Covenant, a program proposed by Gov. Jim Doyle to guarantee a spot in a Wisconsin college or university to high school graduates who achieve certain academic and nonacademic requirements.

Walsh reminded the Board that it contributed to the creation of this program, and encouraged Regents to continue to support the Covenant.

“We have made this commitment, we have signed on, and we’re all working towards it,” Walsh said. “The acceptance throughout the state is terrific. There will be all sorts of steps along the way, and we should be proud and happy that we were a part of that, not only in recommending it, but putting some substance to it.”

The UW System will also be collaborating with the American Council on Education to implement a national campaign to encourage students to prepare for college, the Board learned from Education Committee Chair Danae Davis.

As part of his report to the Board, Walsh also said that Regents will consider tuition rates and an employee pay plan in the coming months as the Legislature and its Joint Finance Committee move forward on the state’s 2007-09 biennial budget.

“We’re going to have some tough decisions,” he said. He said he hoped Wisconsin would remember a statement that former UW President John Weaver said in the 1970s: “Our unwavering confidence is that public education has been a public good, and that public investment is repaid to society in countless ways.”

After lengthy discussion, the Board approved two new degree offerings: a Bachelor of Applied Studies in Interdisciplinary Studies at UW-Green Bay, and a Doctor of Physical Therapy (D.P.T.) at UW-Madison. The full Board of Regents also approved resolutions that:

The Board of Regents will hold its June 2007 meeting on the UW-Milwaukee campus.