University of Wisconsin System Board of Regents News Summary

MADISON – The current funding model for higher education is no longer sustainable and universities must adapt, an education expert told the University of Wisconsin System Board of Regents Thursday.

Ellen Chaffee, a senior fellow with the Association of Governing Boards (AGB) and director of AGB’s Lumina project on Governance for Student Success, led a wide-ranging discussion on strategic finance and how it can help boards and universities achieve goals even in difficult times.

“Business as usual won’t cut it anymore,” Chaffee said. “Now is the time for much more creative thinking.”

Chaffee explained that “strategic financing” is defined as “aligning financial decisions – regarding revenues, creating and maintaining institutional assets, and using those assets – with the institution’s mission and strategic plan.”

Strategic finance demands a change of focus in how Boards and presidents think, she said. Traditionally, dealing with budgets has meant looking back and focusing on dollars. Strategic financing, by contrast, means looking forward and expecting improvements, Chaffee said. “The focus is not just on dollars, but on time, technology, and other resources,” she said.

Key to the new approach is a shift from funding enrollment to one that funds college completion, Chaffee said.  As an example, she cited a new funding model in Ohio that incorporates, among other things, course completion as a financial indicator.

The Regents took part in an informal brainstorming exercise to generate possible options to address the resource challenges facing universities. 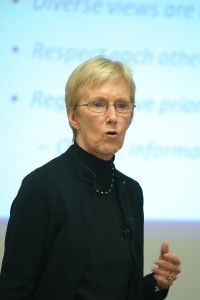 “The more aware you are of dynamics and possibilities, the more you can look out as far as possible … in order to figure out how to fund this,” Chaffee said.

To meet longer-term goals, the Board must continue to aggressively push for further dialogue with the State about the importance of the UW System’s Growth Agenda for Wisconsin, said Regent President Chuck Pruitt

“There may need to be a particular emphasis on the external relations piece of things and on innovation. That’s where the nation, frankly, needs to go, and Wisconsin is in a position to play a significant leadership role,” Chaffee said.

In closing, she urged the Board to continue examining old habits and conventional wisdom, focusing on “big picture” strategies to achieve its goals. 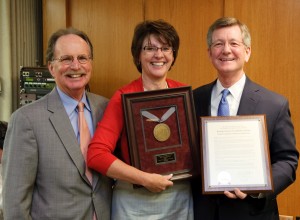 Regents presented Regent Eileen Connolly-Keesler, of Neenah, with a resolution of appreciation for her service at the conclusion of her seven-year term on the Board.

In presenting the resolution, Regent Mark Bradley called Connolly-Keesler the ultimate “GTP,” or go-to person.  “Everybody has known that no matter how busy she is, if you pick up the phone and ask for Eileen and need to get something to get done … it gets done.  That comes out of her dedication and passion for the students and families who attend our public universities,” Bradley said. 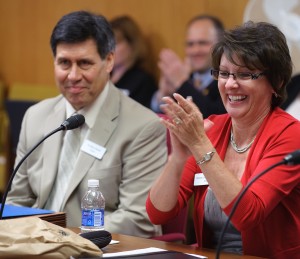 Saying she was honored to serve on this Board, Connolly-Keesler added that she was impressed and amazed by the myriad of issues facing the Board. Noting that it took time to appreciate the university’s commitment to shared governance, addressing complex issues “sometimes is difficult, but it’s always worthwhile,” Connolly-Keesler said. “It’s all about education in the state of Wisconsin.”

Regent Edmund Manydeeds of Eau Claire replaces Connolly-Keesler on the Board, and participated in his first meeting today.

The UW System met or partially met its goals on 19 of 20 indicators used to track its higher education performance for 2009-10, the UW Board of Regents was told Thursday.

He noted that the report shows that the UW System contributes $10 billion annually to the Wisconsin economy, a 10-fold return on the $1 billion annual investment by state taxpayers.

Reilly reminded the Board that UW System began this process more than 16 years ago, when the university became the first statewide system of higher education to publish an annual accountability report.

Sharon Wilhelm, Interim Associate Vice President in the Office of Policy Analysis & Research, provided Regents with an overview of the report, “Investing in Wisconsin’s Future.”

The report also includes individual reports from each of the 15 UW institutions. New this year, these reports have the same structure and expanded framework of the Systemwide report.

Wilhelm told Regents that additional improvements to this year’s report include more information about partnerships and the high-impact practices that enhance student learning.

A sampling of findings from the report includes:

The Board had considerable discussion on the lack of significant progress in closing achievement gaps between white students and students of color.

Regent Danae Davis said, “The lack of urgency is simply appalling… Our students, faculty, and staff, and our communities deserve so much better from us. I just want to ask, when are we going to deliver?”

Regent José Vásquez added that he is concerned that lack of success in retention and graduation rates among students of color also perpetuates stereotypes, further compounding the long-term problem.

Rebecca Martin, Senior Vice President for Academic Affairs, said she shared the frustration, but added there are stepped-up efforts to track campus efforts through better data and accountability.  “It’s not just saying we’re going to do better, but putting specifics behind it,” she said.

President Reilly and Regent President Pruitt also led a discussion on plans to use the Accountability Report as part of larger statewide advocacy efforts to build greater consensus in the public and with elected officials about the Growth Agenda and its importance for the state.

“With this report, we can say, ‘This is how you know we are delivering on your investments,’” Reilly said.

“We need to engage community leaders in the conversation … and make choices explicit,” Pruitt said.

As the Board continues to plan for the 2011-13 biennial budget, student representatives from United Council and several UW System campuses outlined their top priorities to the Regents.

Representing the United Council, Michael Moscicke, a UW-Waukesha and UW-Madison alumnus, said that students are more educated about the budget process than ever before, and noted that many of students’ priorities align with those expressed by the Regents.

“With a united front, we should be making huge requests, bold requests,” Moscicke said.

Among the priorities identified by students were calls for eliminating all unmet financial need for students, increased mental health funding on campuses, funding cost-to-continue, and others. They also reiterated to the Board their concern that amid plans to increase the number of college graduates that quality remain a top priority.

Regent Kevin Opgenorth, a senior at UW-Platteville, urged the Board to “recognize how knowledgeable and involved students have become about the budget.”

Regent President Pruitt commended the students for their “very thoughtful and serious laying out of priorities and objectives.”

In closed session, the Board approved the appointment of Bernie L. Patterson as the new Chancellor at UW-Stevens Point.  Patterson is currently the Provost and Vice President for Academic Affairs at Oklahoma City University.  He is expected to begin in early July.

In other action, the Board: