Lyall plans to retire at the end of the academic year.

MADISON—University of Wisconsin System President Katharine C. Lyall announced her retirement at a press conference in Madison today (Feb. 4), marking the end of one of the longest and most productive presidencies in the history of the UW System.

Lyall, 62, said she would stay until her replacement arrives or until Sept. 1, 2004, at the latest. In September, Lyall, an economist, will begin a year’s appointment as a visiting senior scholar at the Carnegie Foundation for the Advancement of Teaching in Palo Alto, Calif.

“It has been extremely exciting to lead the world’s best university system and a great privilege to serve the people of Wisconsin in that role,” Lyall said. “I leave with a great sense of pride in all we have accomplished, especially in the more than 300,000 students who have graduated from our four-year campuses during my tenure.” 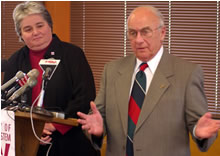 “Our university community cannot thank her enough for what she’s accomplished, including putting virtually all our current UW leadership in place,” noted Toby Marcovich, president of the UW System Board of Regents. “She has led the UW with wisdom, integrity, wit, common sense and a wonderful collaborative spirit and our campuses are the richer for it.

“I know she had hoped to retire a year ago, and I appreciate that she was willing to stay on this year to help our regents chart a future course for the UW and prepare for the 2005-07 state budget process,” Marcovich said.

Lyall’s tenure has been marked by many firsts and financial milestones.

Regent President Emeritus Guy Gottschalk of Wisconsin Rapids thanks Lyall for her service and dedication to the UW System.

During her presidency, UW System sources of revenue diversified; though the university’s state budget grew $200 million, its budget from other sources more than doubled to $2.3 billion annually. This growth enabled new majors and programs, growth in research, including at the undergraduate level, new study-abroad programs, and many new campus facilities. She also cheered the Badgers through several Rose Bowl wins during her presidency.

Lyall became the first woman ever to serve as UW System president. Her 12-year term as president represents one of the longest tenures of any university system president in modern times. The average tenure in such posts nationally is now less than five years.

During her presidency, the university forged new partnerships with Wisconsin’s technical colleges and K-12 community, helped to revitalize the university’s 13 two-year campuses, instituted many technological innovations including online courses and degrees, and instituted the first annual accountability “report card” to citizens, measuring progress in important areas like access to the university, graduation rates, retention rates and progress toward achieving a more diverse student population.

“I have known her and worked with her for more than a decade, and she has my deepest respect and gratitude for her contributions, including her work to highlight the state’s economic development needs and to put the university to work addressing them.”

Lyall made economic development a high priority for the university and its 15 institutions in recent years, sponsoring four annual economic summits since 2000 and garnering state and federal funding to establish new majors in high demand fields, to provide assistance to small businesses and to energize regional economic development.

“President Lyall recognized that the economic vitality of the state is critical to its public system of higher education and thus the quality of life of its citizens,” said former UW Board of Regents president Jay L. Smith, who led the four summits with Lyall. “During her tenure, President Lyall moved the pride of Wisconsin in its university system to a new level of excellence.”

Many credit Lyall for helping the UW’s collection of 15 institutions evolve into a much more collaborative and interdependent system during the past dozen years. These include joint admission and degree programs in which campuses partner together and new shared administrative and personnel systems that are under development.

“She took what had been a system on paper and made it a system in reality,” Smith said. “That is a credit not only to her leadership, but also to the campus and system leaders she has appointed.”

Lyall’s tenure also had many challenges with sharp state budget cutbacks in the mid-1990s and again, over the past two years. She responded by streamlining the university’s bureaucracy, downsizing the UW System staff and making UW the most efficient university system in the United States, for which she has been recognized by other higher education leaders.

“She has confronted many challenges over her long tenure, but her legacy will be a University of Wisconsin System that is stronger and closer to the people of Wisconsin than ever before,” said former University of Illinois and American Council on Education President Stanley Ikenberry. “She has chosen to exit the stage at the pinnacle of a truly outstanding performance.”

Said former UW-Madison Chancellor and Health and Human Services Secretary Donna Shalala: “Katharine Lyall is one of higher education’s most gifted leaders. Wisconsin has been lucky to reap the rewards of that leadership. She has significantly increased the quality of the System’s institutions.

“Her integrity, high intelligence and good humor will be hard to replace,” said Shalala, now president of the University of Miami.

“I think it’s fair to say that many of us cannot yet envision the University of Wisconsin System without President Lyall at the helm,” said Regent President Marcovich in Wednesday’s press conference announcing Lyall’s decision. “We appreciate her willingness to help us achieve a smooth transition of leadership.”

Marcovich said he will put the presidential search on a fast track, appointing a search-and-screen committee within the next few weeks with the goal of having the Board of Regents name a successor to Lyall by June of 2004.

“Looking forward, the UW System now faces new challenges,” Lyall said. “Through ‘Charting a New Course,’ the Board, chancellors, faculty, staff and students are redefining the role of public higher education in an era of shifting public priorities and public financial support. The result will set a blueprint for the UW System’s future. This is an appropriate time for new energy and fresh leadership of the System.”