PLATTEVILLE – Amid continued concerns about separating UW-Madison from the UW System, UW System President Kevin P. Reilly reiterated the advantages offered by the proposed Wisconsin Idea Partnership (WIP) at a meeting Thursday of the Board of Regents, hosted by UW-Platteville.

With the UW System facing a $250-million cut under the proposed 2011-13 biennial state budget, Reilly said the plan would provide all UW institutions with new managerial flexibilities to manage scarce resources while maintaining the existing unified System.

“Under our proposal, there is no question whatsoever about the public status of our UW institutions. Our public university system and all its constituent parts will be owned by the public, and will remain accountable to the citizens and their elected officials,” Reilly said. 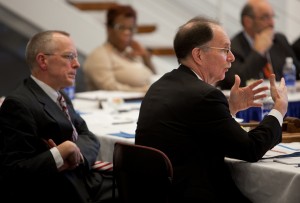 Regent President Charles Pruitt reminded the Board that any discussion of the UW System budget must begin with the system’s vital mission, and the premise that Wisconsin needs more well-prepared college graduates, more well-paying jobs, and more engaged citizens in the 21st-century knowledge economy.

“Because of the educated workforce we provide and the jobs we help create, the UW System must be a core pillar of the State’s economic development strategy,” Pruitt said.

To update Regents on the current budget deliberations, Reilly recounted the highlights of his recent testimony before the State Legislature’s Joint Finance Committee. He noted that while the 2011-13 Capital Budget will have a positive effect on UW campuses, with its long-term investments in facilities, the proposed operating budget presents major challenges.

As budget discussions progress, President Reilly said that it’s important not to lose sight of the real-world impact of budget cuts. 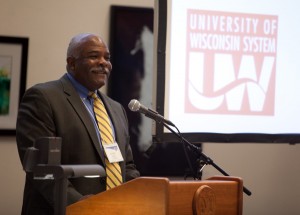 “Cuts of this magnitude will have significant impacts on all our students, all our faculty and staff, and all the educational programs and services we provide,” Reilly said.

He singled out financial aid as a particular concern, given the proposed state budget’s flat funding of the Wisconsin Higher Education Grant program and the Tuition Increase Grants, which help hold needy students harmless from tuition increases.

“Taken together, these elements of the budget will hit low- and middle-income students from across the state – people whose families are already hit hard by the economic downturn,” Reilly said.

Noting that the UW System’s latest Accountability Report would be presented to the Board the following day, Reilly relayed to Regents the concern expressed by some legislators that the UW System’s current report is “too exhaustive.” To address those concerns – and in light of discussions of new flexibilities – Reilly suggested that future reports include a special section focused on “measuring our implementation and delegation of any new administrative flexibilities that are provided.”

Regent Jeff Bartell questioned how the Board would delegate flexibilities, and whether that process should be spelled out by statute.

Morgan noted that one of challenges is to provide flexibilities in a way that also provides Board members and Chancellors with the flexibility to make adjustments under unforeseeable future circumstances. He noted that it is more difficult to change statutes than policies.

Reilly added that flexibilities and their delegation could be made part of the regular accountability process, which is also presented before the legislature.

Regent Tom Loftus suggested that in the current highly divided state, “We’re adding to the division by seeming to present two competing proposals to the legislature.” He urged the Board to “get that one voice.”

Regent President Pruitt told the Board that he and Regent Vice-President Michael Spector have communicated with the Joint Finance Committee, specifically addressing the Board’s commitment to delegate authority to the campuses.

Student Regent Aaron Wingad told the Board that keeping students involved in the tuition-setting process, including determining differential tuitions, is vital in getting their “buy-in” or support of the Wisconsin Idea Partnership.

UW-Madison Chancellor Biddy Martin told the Board that she understands the importance of speaking with one voice to the legislature, but she suggested that there is “honest disagreement about what is best for UW-Madison.”

Reilly commented that the Board’s discussions properly reflect the “momentousness of the issues on the table.” 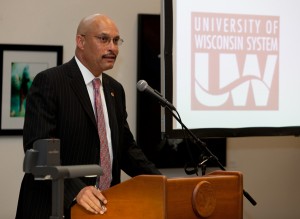 Chancellor Dennis Shields told Regents that UW-Platteville is taking steps to control its own destiny and encourages its students to do the same.

“We’re very excited about what’s going on here,” Shields said. He noted that UW-Platteville is the fastest growing institution in the UW System, nearly doubling in size over the past 13 years. Its enrollment has increased 48% in that time.

A video, “Celebrate UW-Platteville,” highlighted the collaborations between the university and the surrounding community, and the university’s focused efforts to foster well-rounded students through academic research, community outreach, and international study opportunities.

The Tri-State Initiative, for example, connects the university’s academic strengths in fields such as engineering, manufacturing technology, computer science, business, agriculture, criminal justice, and education, with identified workplace shortfalls. The initiative aims to attract students from the tri-state area of Illinois, Iowa, and Wisconsin.

Ian McGregor, an environmental engineering major, spoke of what it meant to him to be part of an Engineers Without Borders project building a bridge over a flood plain in Ghana. “I got to practice what I’d like to do upon graduation right now as a student. Not only that, but I got to travel and implement (a plan) and see the benefits of the project on an entire community.”

“We’re helping students develop their abilities to think on their own,” said Tim Zauche, chair of UW-Platteville’s Department of Chemistry and Engineering Physics.

Providing students with the opportunities for experience, growth and making a difference are key ingredients in making ‘360-degree students,’” Regents were told.

UW-Platteville puts the focus on real-world engagement of students

In a presentation led by Provost Mittie Nimocks, student groups displayed their class projects to the Education Committee to illustrate some of the innovative work taking place at UW-Platteville.

The featured projects included an eye-tracking device and a visual tracking light board, both now in use as measurement and therapy tools in the K-12 school systems in Sauk Prairie and Platteville.

The projects, funded by the Pioneer Academic Center for Community Engagement, are examples of the “real-world” focus at UW-Platteville, the Committee heard. Working with occupational and physical therapists from nearby school districts on the projects shown, students better understood the process of designing products to meet the needs and demands of future clients.

The Education Committee heard an evaluation of the UW System’s partnership with the Association of American Colleges & Universities (AAC&U) on the Liberal Education and America’s Promise (LEAP) campaign.

In 2005, UW System was designated as a pilot partner in the LEAP campaign, a 10-year national initiative designed to focus public attention on the quality of students’ undergraduate education, through campus action and public outreach and advocacy.

Senior Vice President Rebecca Martin pointed to a letter of support sent to the Regents from AAC&U President Carol Geary Schneider, who called the UW System “a shining example of intentional, integrated, and outstanding work on behalf of the students in its educational system.”

The presentation highlighted the shared purpose between LEAP and the System’s diversity and equity work on Inclusive Excellence, and how that work is embedded in the System’sGrowth Agenda for Wisconsin through the commitment to ensure that more – and more diverse – students have access to higher education, and persist to complete undergraduate degrees. 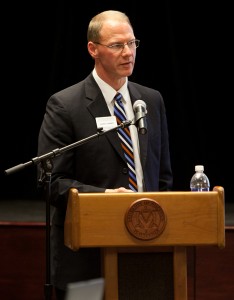 Assistant Chancellor Rob Cramer led a brief presentation for the Business, Finance & Audit Committee on the possible impact of the Wisconsin Idea Partnership on UW-Platteville. He noted that UW-Platteville’s significant growth over the past decade has impacted the university’s human capital, physical infrastructure, and academic programs. The university’s enrollment growth, for example, has generated an increased demand for student housing.  Flexibilities through the WIP would enable the campus to simplify the process of building a needed residence hall.

Cramer added that providing universities with a block grant, as proposed under the WIP, would allow UW-Platteville to more deftly meet its pressing academic needs such as revising the general education curriculum, expanding undergraduate research, or increasing retention and graduation rates.  The plan would also enable the university to reallocate savings in support of the university’s mission, he said.

The Business, Finance & Audit Committee received an overview of the UW System’s Enterprise Risk Management (ERM) initiative, which is designed to identify and manage real and potential risks and opportunities that may affect operations.

The system-wide effort, sponsored and funded by UW System Administration, has been piloted by four UW institutions (Oshkosh, Superior, Whitewater, and Parkside).  In addition, discussions have begun with three institutions regarding their implementation of an ERM process.

“The University of Wisconsin is a bit ahead of the curve nationally,” said Sheri Ackley, Director of UW System’s Office of Safety & Loss Prevention.

Vice Chancellor for Administration Thomas Sonnleitner provided the Committee with highlights of the ERM initiative at UW-Oshkosh.

Senior Vice President for Administration and Fiscal Affairs Michael Morgan told the Business, Finance & Audit Committee that the Human Resource System (HRS) is on-time and within budget, and is on target to go live on April 18.

Morgan said extensive campus readiness assessments have been successfully performed. Based on those results, “I’m very confident that this cutover and eventual go-live will go well for us,” Morgan said.

The first paychecks to be disbursed using the new system will go out the first week of May.

Morgan added that there will be an HRS user support group at the service center to help any employees as the system actually goes live.

Regent Brent Smith asked about the possible repercussions of a UW-Madison split on the HRS. Morgan said that the high costs of implementing the HRS could mean its shared use, at least for the immediate future.

Report of the Associate Vice President 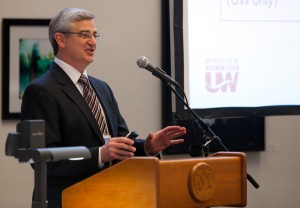 Associate Vice President David Miller provided the Capital Planning & Budget Committee with additional information about the 2011-13 Capital Budget. He reported that the Building Commission’s recommendations fully fund all the projects in the Board of Regents’ requests and also pick up one project slated for 2013-15.

In the context of the six-year physical development plan presented to the Committee last December, Miller said this means there are no unfunded carryover projects that would set back the plan in 2013 and beyond. He said planning can continue for 2013-15 with confidence that the projects will be funded in future biennia.

Miller added that the UW System’s increased percentage of total General Fund Supported Borrowing demonstrated the Governor’s and Building Commission’s appreciation of the need for improved academic facilities across the System.

UW-Platteville campus planner Doug Stephens told the Committee that the development of the university’s master planning is influenced by the requirements of future academic expansion, and the needs of greater housing capacity and infrastructure improvements.

In other business, the Capital Planning and Budget Committee

As part of the review of Regent Policy Documents (RPDs) launched by the Board in February, the Education Committee and Budget, Finance & Audit Committee each considered several RPDs for either removal or revision. Some reports that were previously endorsed by the Board which are no longer applicable or in effect will be archived.

The Business, Finance & Audit Committee, for example, eliminated the Regent policy with respect to the use of staff leave time related to bone marrow and human organ donation. Current Regent Policy duplicates requirements included in State of Wisconsin Statutes and is therefore considered redundant.

Additional RPDs will be reviewed at future meetings.

The UW System Board of Regents will resume its April 2011 meeting on Friday, April 8, at 9 a.m.
in Ullsvik Hall, UW-Platteville