UW System Board of Regents meeting

The University of Wisconsin System contributes $9.5 billion to the state’s economy each year, a return of nearly 10 times the amount the state invests in the university, according to a study released Thursday.

David J. Ward, president of NorthStar Economics in Madison, illustrated for the Board of Regents at its Sept. 12 meeting in Madison how the university directly and indirectly impacts jobs, in-state spending and Wisconsin tax revenues.

The study shows the UW System has created more than 150,000 Wisconsin jobs and generates $408 million in annual state tax sales and income revenues. The UW System contributes more than 5.5% of the gross state product, Ward said.

If the UW System were a private Wisconsin company, this impact would place it in the top 20 state firms, Ward said.

“It’s a substantial number, but a very modest one,” said Regent James R. Klauser, as Ward explained that the $9.5 billion figure would increase if it included the economic impact of auxiliary organizations and out-of-state spending. “I just think the state’s investment gets a far greater return,” Klauser said.

Regent Phyllis M. Krutsch said perhaps the Board would utilize the study as it makes decisions about future UW System enrollments and how they will affect the state of Wisconsin.

“Our biggest challenge is to bring bigger business and better jobs, ” Krutsch said. “Clearly, the UW System is one of our greatest assets.”

UW-Oshkosh Chancellor Richard Wells said the study may help the public better understand how the UW System benefits their communities.

“Bringing it home to the local level is extremely important,” Wells said.

Ward noted that the university’s economic impact on Wisconsin has grown, despite a national economic downturn and a series of state budget cuts to the university.

“Continuing to think of post-secondary education as a major industry in this state is important,” said UW System President Katharine C. Lyall.

Northstar will release additional results from its study on the economic impact of the UW System Wisconsin Economic Summit III, planned for Oct. 14-16 at the Midwest Express Center in Milwaukee. A full report is expected by the end of the year.

The Office of Multicultural Affairs has also changed its name, and will now be known as the Office of Academic Diversity and Development (OADD).

The committee discussed six areas on which the department will focus its efforts in 2002-03, primarily centering on measures of academic quality.

The committee also heard first readings on two new program authorizations: a bachelor’s degree program in Athletic Training at UW-Oshkosh and a collaborative master’s of social work degree from UW-Green Bay and UW-Oshkosh. The latter would jointly serve students in the Fox Valley area and would be funded from existing reallocated dollars from each campus and federal matching funds.

Regents revisit “Building our Resource Base”

Freda Harris, Associate Vice President of Budget and Planning, reported to the Business and Finance Committee on 25 options for building the UW System resource base, a report the board received last spring. Of these, 10 had been implemented, 6 were being studied for action at a later date and one was being recommended for a pilot. Of note among those recommendations being implemented immediately, the board has requested in its biennial budget submission that it be allowed to retain the interest earnings on student tuition. The board also requested a modification of current policy to move the UW System toward reaching 95% of the peer midpoint for resident undergraduate tuition.

The plan was a look at alternative funding approaches for the UW System. Its principles include the UW System’s commitment to affordability, a continued link between state financial aid and tuition increases and maintaining accountability to stakeholders. The board approved the plan in June 2002.

The UW System Office of Internal Audit reported on contracting and noted that there are a number of reasons UW institutions “contract out.” The report stated that there are advantages and disadvantages to these agreements. If done correctly, outsourcing can often save money and/or improve services. The UW System Office of Procurement is developing a database of currently outsourced items and guidelines for campuses interested in further outsourcing.

In other committee news:

Assistant Vice President for Capital Planning and Budget Nancy Ives reported to the committee that the Building Commission has approved $17 million for various projects since June. The Wisconsin Veterinary Diagnostic Lab to be built in Madison, perhaps before the end of the calendar year, will receive federal funding related to Homeland Security measures for animal disease inspection, Ives said. The Building Commission will probably take action on a request at their meeting next week.

In an annual report, the UW Colleges noted that while capital projects have increased over the past few years, the activity is predicted to level off after the next three biennia. Municipalities are moving more cautiously due to current economic conditions, but have not backed off any commitments to current projects, the report said. These include a science facility at UW-Washington County, an art building renovation at UW-Marathon County, and a high-tech classroom addition at UW-Marshfield/Wood County. 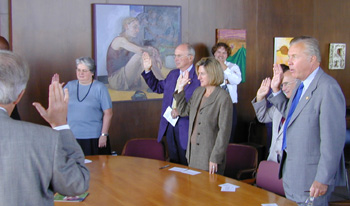 In other committee action:

The Board of Regents continues its September meeting on Friday (Sept. 13), starting at 9 a.m. in 1820 Van Hise Hall in Madison.

Based on “The Economic Impact of the UW System”
Study by Northstar Economics, Inc., Madison, WI
www.northstareconomics.com
September 12, 2002