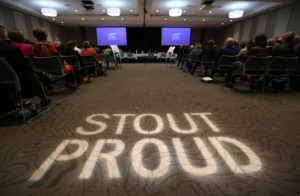 MENOMONIE, Wis. – University of Wisconsin System President Ray Cross said that Wisconsin’s demographic trends are among the most significant challenges facing the state and university at this time.

“The convergence of demographics and declining enrollments at a time when we need a more educated populace means we need to be acutely aware and focused on how to best position the University of Wisconsin System for the future of our students and our state,” Cross said, at Thursday’s meeting of the Board of Regents at UW-Stout.

He noted that while Wisconsin’s population overall is growing, its projected workforce numbers are flat.

“We need more of the shrinking number of working age adults to be college-educated. That means we must get more students into and through the education pipeline, if we are to meet future workforce needs,” Cross said.

These competing dynamics are a driving force behind 2020FWD, the UW System’s strategic plan, approved by the Board in August 2016. 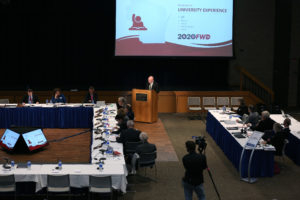 As part of the first annual progress report on 2020FWD, Cross provided an overview of six major initiatives the UW System is prioritizing as the plan is operationalized. Those initiatives include strengthening student advising services, making transfers between institutions easier for students, and encouraging undergraduates to participate in more high-impact practices such as internships, research, capstone projects, study abroad, and others.

Other high-priority initiatives include:

“We need to consider now what this university can and should look like in 10-15 years,” Cross said. “We must make some decisions in the very near future to position ourselves wisely to serve those communities that are most directly impacted by demographics and other stressors.”

He pointed out that a system of higher education is a plus at such times, when the economies of scale and shared resources can be leveraged.

“We need to ensure we have a university, infrastructure, and plan that is focused on meeting future needs, not just maintaining the status quo,” Cross said.

“Recruiting and selecting the leaders of our institutions is one of the most significant responsibilities we have,” said President Cross. “I appreciate the hard work done by the hiring workgroup to help streamline our process and also to help ensure that UW institutions, our students, and Wisconsin taxpayers get the fine leaders they deserve.”

Regent President John Robert Behling had called for the creation of a workgroup last August to address these issues in the context of the 2017-19 biennial state budget, which includes a prohibition against only considering individuals who are faculty members, or who have been granted tenure, or who have terminal degrees, for the positions of UW System president, university chancellor or vice chancellor.

Regent Vice President Drew Petersen, chair of the workgroup, noted that national trends toward the aging of college presidents and a shift in focus of top leadership roles to budget and management also were also drivers of the proposed changes.

“We will need to cast a wider net to attract the best candidates for chancellor, and system president for that matter, in the future,” Petersen said. “As the role of chief executive officers in higher education continues to evolve, this provision will ensure we are able to recruit, attract, and hire candidates with the skills and experience necessary to excel.”

President Cross said he was disappointed that the UW System’s request to veto the chief academic officer position from discussions about considering candidates from non-academic circles was denied. “But I recognize this is now law, and this policy reflects that law,” Cross said.

The work group consulted with higher education colleagues in other states, including the University of California System Chancellor Janet Napolitano, Petersen said. Shared governance and institutional leadership also had input.

Responding to questions about reducing the size of the search committee, Behling emphasized that smaller does not mean less input. He said he is committed to ensuring that the voices of the campus community are clearly heard. “These opinions have always been important to a robust search process, and that will continue under this new policy,” Behling said. 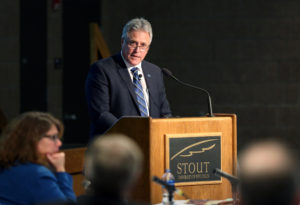 Host Chancellor Bob Meyer told Regents that UW-Stout has stayed true to the aim of its founder, James Huff Stout, to emphasize applied learning. “I never tire of employers telling me how they love to hire UW-Stout students because they hit the ground running,” said Meyer, an alumnus and former faculty member at UW-Stout.

As the state’s only designated polytechnic university, UW-Stout is proud to tout its 97.4% employment rate for recent graduates, Meyer said, noting that it affirms how the institution is meeting the needs of the region

The university has significant economic impact in the region, according to Meyer, supporting more than 4,600 jobs and accounting for 2% of the region’s gross domestic product, according to a recent study.

Meyer announced that the institution’s new engineering school – approved previously by the Board of Regents – will be named the Robert F. Cervenka School of Engineering in honor of a $2.5-million donation

The late Cervenka is the founder of Phillips Plastics (now Phillips Medisize). More than 1,000 students are enrolled in engineering or engineering technology programs at UW-Stout, which is part of the Northwest Wisconsin Engineering Consortium with UW-Eau Claire and UW-River Falls.

Jim Henderson, Vice President for Academic and Student Affairs, reported that preliminary enrollment data for the 2017-18 academic year shows a 1.4% decrease systemwide in overall headcount from last year. Transfer enrollments dropped by 3.5%. He also noted that enrollments for both new freshmen and graduate students are up, by 0.5% and 1.3%, respectively.

Henderson told Regents that the UW System has initiated a task force to upgrade the existing policy on academic program review including identifying low-producing degrees and campus actions for programs that may not meet specified productivity levels.

In addition, Henderson reported that the UW System is actively working on developing its outcomes-based funding formula, in accordance with the guidelines provided in the recently-signed state budget. He said the UW System expects to present a formula to the Board for review in December, prior to submitting it to the Joint Finance Committee by the Feb. 15, 2018, deadline.

The Business and Finance Committee received an update on the UW System’s managed travel program which seeks to consolidate campus travel activity with contract vendors in order to provide better service, produce overall cost savings, and ensure a more consistent, standardized approach to handling these activities.

UW-Stout Chancellor Bob Meyer led an update on economic development and business partnerships across a wide spectrum of high-impact practice areas at UW-Stout.

The Committee heard that UW-Stout’s Discovery Center, which leverages university talent for the benefit of business, industry and the community, accounted for $21.3 million in cost savings/sales for clients, $19.5 million in private investment and 368 jobs created or saved in the last four business quarters, according to Director Randy Hulke. The center’s core principles are enhancing undergraduate research, driving economic development, creating business-industry partnerships and developing fab lab collaborations, Hulke said.

The Capital Planning and Budget Committee discussed the context for the 2019-21 capital budget’s strategic goals and also considered potential capital budget scenarios that focus on affordability and accountability.

The UW System Board of Regents will resume its meeting at 9 a.m. Friday, Oct. 6, at UW-Stout.