Amid national concern about the rising debt load of students, presenters at a University of Wisconsin System Board of Regents presentation on Thursday reiterated that meeting students’ financial aid requirements is essential to maintaining college affordability and access.

Mark Nook, Interim Senior Vice President for Academic Affairs, told the Board that financial aid is also vital to the UW’s efforts to grow the number of college graduates, increase the number of jobs, and improve the quality of life in communities around the state.

“We really can’t do any of those things if we don’t educate a broader swath of the population in the state of Wisconsin, and that means making sure the tuition, room and board, all of the fees that these students have to pay are affordable — whether that’s through a state appropriation  to hold those tuition, fees, and others costs down, or through effective financial aid and financial aid policy that helps to offset some of those costs for those students who most need the help,” Nook said.

With state funding for higher education declining, students in Wisconsin and other states are shouldering an increasingly larger share of costs, UW System President Kevin P. Reilly reminded the Board.

Grant aid isn’t keeping pace with those tuition hikes, Nook said, and that gap is increasingly filled by student loans. He noted that the average debt of a Wisconsin resident undergraduate completing a bachelor’s degree is now $27,004 – an increase of about $20,000 from 25 years ago. Also, a larger percentage of students are taking on debt.

Nook said a student’s average unmet need before taking out loans is currently $9,191 – an amount that is growing much more rapidly than the consumer price index.

Financial aid directors from three UW institutions offered the Board their on-the-ground perspectives.

UW-Eau Claire’s financial aid director, Kathleen Sahlhoff, pointed out that students from families in middle income brackets tend to face the greatest unmet need – that is, they are not needy enough to receive grants but may not have enough assets not to require aid.

UW-Madison’s financial aid director, Susan Fischer, told the Board that differential tuition funding through the Madison Initiative for Undergraduates has had a “huge impact” in enabling the university to provide more students with need-based aid.

Fischer also pointed out that different institutions within the UW System may have completely different population bases, making a “one size fits all” approach to financial aid ineffective. The average family income of a UW-Madison student, for example, tends to be significantly higher than at other institutions, she said.

UW-Milwaukee’s financial aid director, Jane Hojan-Clark, noted that almost one-third of UWM students receive Pell grants. She added that students who may have the greatest need tend to have less familiarity with the financial aid process.

Given the issue’s many complexities, Regent Judy Crain expressed concern that families would have a difficult time understanding how to most effectively navigate the financial aid process.

Regent Tony Evers, superintendent of the state’s Department of Public Instruction, added that “So many hurdles that we put in front of kids, especially students that come from disengaged backgrounds, are just tremendous.”

“I understand we all have to pull in our belts, but everyone knows it would be good for the state to have more baccalaureate degree holders. It would be nice if we could be given the tools to accomplish that without forcing these young people to mortgage their lives,” said Regent David Walsh. 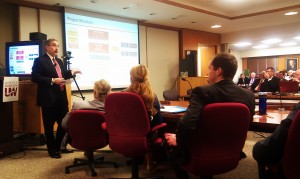 Al Crist, Associate Vice President for Human Resources & Workforce Diversity, led a presentation and discussion of the new university personnel systems being developed as required in the 2011-13 biennial state budget.

That budget directed the UW System to develop two new personnel systems separate and distinct from the personnel system of other state agencies – one for UW-Madison employees and the other for the balance of all UW System employees.

“Particularly in a time of furloughs, cutbacks, and benefit reductions, the development of these new personnel systems is very important to our employees, as we seek to maximize our ability to attract and retain one of our strongest assets, the high-quality faculty and staff that UW is renowned for,” President Reilly said.

Crist said the development process has been guided by three principles: simplicity, consistency, and coherence.

The new personnel systems would give the Board of Regents more authority over titles, compensation, and labor relations.

UW-Madison Vice Chancellor Darrell Bazzell, co-chair of the University Personnel Systems Task Force, told Regents that the task force is actively seeking campus engagement through a wide range of avenues, including websites, meetings, and other collaborations between human resources and communications teams at institutions.

Representatives from UW-Madison and UW System provided overviews of their respective development processes.

Noting that some statutory changes will likely be necessary, Crist suggested that additional flexibilities may also be needed “to fully realize the intent of the Legislature to develop these separate but distinct personnel systems.”

Reiterating recommendations of the Competitive University Workforce Commission, Reilly reminded Regents that “unless the Board has the ability to set university employees’ compensation levels, all this rejiggering of structures is going to be nice, but it won’t get us to where we need to go. That’s just a crucial point that we all need to keep our eye on and emphasize.”

The Regents unanimously approved the creation of a new Board of Regents award to recognize distinguished service to the UW System.

Regent President Mike Spector, who proposed the award along with President Reilly, noted that the award “would be reserved for the recognition of a demonstration of extraordinary commitment and dedication to the advancement of our System.”

Unlike other Regent awards, it need not be given annually and is not monetary.

“As the events of last year reminded us, the UW System is a tremendous asset to the state of Wisconsin.  In recognizing those who make special contributions to the UW System, we reinforce the value of the System itself,” Spector said.