MADISON – The budget request being developed by the University of Wisconsin System for the 2011-13 biennium is designed to help the university pull the state out of the current recession, Senior Vice President Michael Morgan told the Board of Regents Friday.

While acknowledging that the state faces a “very challenging budget environment,” Morgan said the UW System is looking closely at new initiatives that would drive economic development.  “We believe very strongly that there are some things that need to be done and should be done coming from UW System as part of our 2011-13 budget that will benefit the entire state of Wisconsin,” Morgan said.

The three major new focus areas discussed today include the “More Graduates for Wisconsin” initiative, which calls for increasing the annual number of college degrees by 30 percent over the next 15 years, producing a total of 80,000 new graduates over that period. The “Research to Jobs” initiative focuses on leveraging academic research activities to create new businesses and new jobs in the state, and making existing businesses more competitive.  To move those initiatives forward, UW faculty and staff will need competitive compensation. 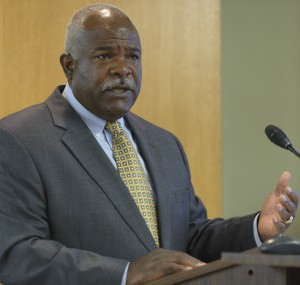 All three topics have previously received the Board’s full support.

Setting the stage for the day’s discussions, Regent President Chuck Pruitt told the Board that Wisconsin is at a crossroads, and there needs to be serious conversation about how Wisconsin will compete in the next decade and beyond.

Pruitt referred Regents to “The Principles for Progress and Prosperity,” a paper prepared by Pruitt and former Regent President Jay Smith, which calls for a new compact between the state of Wisconsin and its public university, one that is “built around a spirit and commitment to shared, mutual responsibility.”

“This loading of additional costs onto UW students and their parents comes at a time when we know it is absolutely in the interest of all Wisconsin taxpayers to have more college graduates in the state’s population,” Pruitt said.

Morgan said early indications are that the state understands the importance of the university’s role in propelling the Wisconsin economy forward. “We’re one of the few agencies to have leeway now to bring forward new initiatives,” he said.

Morgan noted that budget instructions issued by the Governor indicate that state departments should expect no increases in their budgets outside of cost-to-continue. There were exceptions to this, he added, and the UW System is one. “The exception pertains to Wisconsin instructional and research activities that drive economic growth in the state,” Morgan said.

Associate Vice President Freda Harris explained that several worthwhile ideas were scaled back or scratched altogether, in deference to the economic conditions.

UW-Madison Chancellor Biddy Martin expressed concern about what might happen if the new initiatives are received with enthusiasm by the state, but without adequate funding to support current academic programs. “Couldn’t we be put into a situation where we would have no choice about whether we fund our core activities as well as we can … or whether we’d have to cut even more  because we’re asked to do these Research to Jobs or increase enrollment initiatives?” she asked.

UW System President Kevin Reilly agreed that to do more, some reinvestment from the state will be necessary.

Morgan added that protecting the UW System’s base funding is critical to the success of any new initiatives. “One of [the] real hard strategies is how we maintain our cost-to-continue, what we include in cost-to-continue, how we protect our base, how we ensure in a very aggressive way that we have the basic underpinnings to build these new initiatives. If we can’t maintain that, then we have a flawed base and we have some real challenges.”

UW-La Crosse Chancellor Joe Gow urged the Board to make faculty and staff compensation a priority in its budget deliberations. “If we’re going to ask our people to produce more graduates and produce the kind of research that will lead to jobs, we certainly can’t ask them to continue to be compensated at a level that is not competitive,” he said.

The proposed budget request does call for restoration of the 2% state pay plan that was rescinded for non-represented State employees, including UW academic staff and faculty. State and UW employees represented by unions did receive that increase in June 2009, and UW leaders expressed concern about equity among employees.

Regent Michael Falbo said a key question in considering the proposed budget is whether it keeps the university on track to achieve the goals of the Growth Agenda. “If it does, I support this process,” he said.

Regent Jeff Bartell urged the Board to consider the budget proposal as a package.  “I don’t think we should begin by identifying priorities among these things. I think that’s bidding against ourselves. The idea is this is a package, and it’s a reasonable package in light of the current economic conditions.”

Student Regent Jessica Schwalenberg stressed the need to keep a long-range perspective. “If we get students here but cannot serve them well, it might keep them from coming back in the future, or change the view of education of a whole family, not just one person,” she said.

Regent Tom Loftus questioned whether the tuition freeze at the Colleges is producing the intended results, that is, increasing the number of students earning degrees.  Regent José Vásquez also wondered how long a tuition freeze can be sustained.

“Part of what we’re trying to do is provide more different kinds of choices for parents and students,” Reilly said. “We’ve got to find ways to keep a UW education affordable for a wide range of families. This is one element of that.”

Regent John Drew noted that while it’s difficult to look at a 5.5% tuition increase in the current stressed economy, he was pleased with the options in place to protect low-income families. “Some other time, I would have been at the back of the room holding a sign, but right now I don’t see an alternative to this budget so I’m supporting it,” Drew said.

In presenting background for the UW System’s proposed capital budget request, Associate Vice President David Miller reinforced the key role of adequate facilities.  “It’s not about bricks and mortar … It’s about the quality of instruction and student success.”

He said that four projects in the 2011-13 budget have existing advance enumeration: the School of Human Ecology, the Wisconsin Medical Research Middle Tower, and the West Campus Cogeneration Facility chiller plant, all at UW-Madison; and UW-Milwaukee’s Master Plan Initiative.

Miller reiterated the efficiencies of time and money that might be achieved in building processes if the university were provided greater flexibilities by the state. 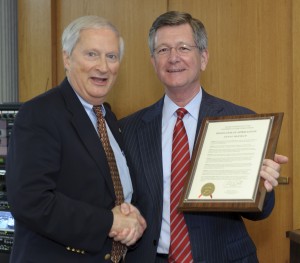 The Board recognized Julius Erlenbach, who is retiring as the 11th Chancellor of UW-Superior after 14 years of service.  In presenting him with the Board’s resolution of appreciation, Regent Mark Bradley noted that Erlenbach had a well-earned reputation for promoting the liberal arts and overseeing the campus’ biggest building boom in 40 years.

Reprising his signature line, Erlenbach told Regents, “Yes, I think it is truly another beautiful day in Superior.” He thanked the Board for its “great support” over the years.

Provost Christopher Markwood will serve as interim chancellor until Erlenbach’s successor is appointed.

Regent President Chuck Pruitt informed the Board that the August agenda will include a review of the hiring policy for Chancellors, Senior Vice Presidents, and Vice Presidents.  Board Secretary Jane Radue will lead the process of reviewing relevant policies, Pruitt said.  The intent is to clarify the process for interim appointments to these positions.