UW Regents to take up annual budget and tuition

MADISON, Wis. – The University of Wisconsin System Board of Regents will review an operating budget and consider new tuition rates for the 2011-12 academic year this week. Faced with $250 million in reduced taxpayer support over the next two years, relatively modest tuition increases may be needed to cover a fraction of that lost support.

For the fifth consecutive year, UW System President Kevin P. Reilly has proposed a 5.5% average tuition increase for resident undergraduates at the UW System’s four-year campuses.  If the new rates are approved, the average annual tuition at four-year UW institutions will be $6,543, an increase of $381 from last year.  Reilly is recommending the same 5.5% increase for the 13 freshman-sophomore UW Colleges – the first tuition increase at those schools in five years. If approved by the Regents, annual tuition for full-time resident students would be $4,503 for students at the UW Colleges, an increase of $235.

The recommended tuition rates would generate approximately $37.5 million in additional revenue for the coming year, which will cover less than one third of the $125 million in budget cuts that UW System universities and colleges must make in the first fiscal year of the 2011-13 biennium.

“Enrollment at our universities and colleges is at an all-time high, and Wisconsin’s need for educated citizens will only continue to grow in the dynamic global economy. As we present this annual operating budget, we’re keeping our eye on the long-term goal of preserving broad access to a high-quality educational experience,” said Reilly. “Ours is not the only state where universities must tighten their belts to deal with state budget cuts, but we have successfully avoided the kinds of double-digit tuition increases that would place a heavier burden on our students and their families.”

“As the Regents review this proposed budget, we will again consider a balanced big picture, including not only the price students pay, but also the aid they receive to reduce that cost, and the lifelong benefits they derive from a first-class college education,” said Regent President Michael J. Spector. “We must also keep in mind the broader benefits that all of Wisconsin derives from having an educated workforce. We want to ensure that the UW System institutions retain a robust capacity to serve as economic engines for the state.”

According to the College Board (http://trends.collegeboard.org/college_pricing), most public university students receive significant aid in the form of grants, scholarships, and federal tax benefits. These aids reduce the “net cost” of college. While published tuition rates continue to increase, the average net price for full-time students has declined over the past five years, after adjusting for inflation.

About two-thirds of all UW System undergraduate students receive some form of financial aid, and about half of those receive at least one outright grant or scholarship. Wisconsin Higher Education Grant (WHEG) awards and Federal Pell Grants comprise the largest sources of student aid at UW institutions. One out of every five resident undergraduate UW students received a WHEG award last year, with an average award of $2,161.  State funding for WHEG-UW will remain flat next year, but UW leaders have worked with the Higher Education Aids Board (HEAB) to approve a new formula that will spread these grants among a larger number of students.

This fall, the first cohort of Wisconsin Covenant scholars will arrive at UW campuses, with participating students receiving between $250 and $2,500 in aid each year.

Continuing students who first enrolled before 2011-12 will still be eligible for Tuition Increase Grants, which help to offset some tuition increases for qualified students. Because of new flexibilities provided by the state, the UW System can reallocate unused funds from this program to assist other financially needy students. 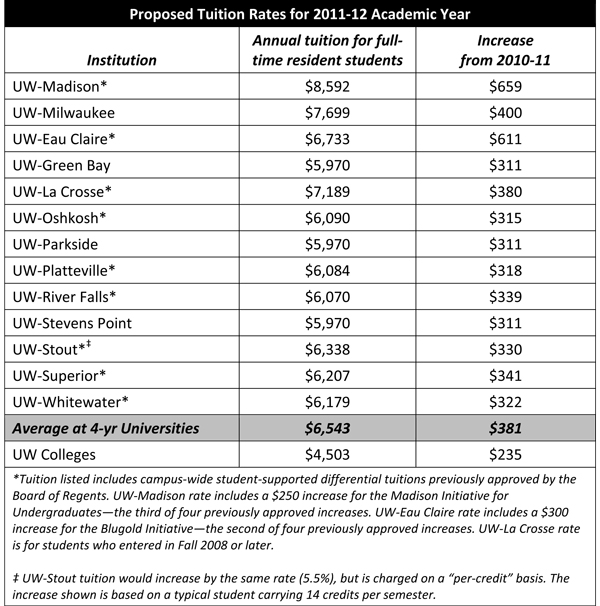