MENOMONIE, Wis. – Today, the University of Wisconsin System Board of Regents approved a new policy regarding academic freedom and freedom of expression on the System campuses. The purpose of the policy is to communicate the Board’s commitment to both issues, as well as set expectations for those who violate those freedoms.  The policy builds upon the resolutions the Board passed in December 2015 and July 2017.

“Campuses across the country are wrestling with the question of appropriate behavior of students,” Regent President John Robert Behling said. “The University of Wisconsin is a large system and I believe we need consistent learning environments at all of our campuses. Through this policy, we inform students and taxpayers that we can provide a world-class education in an atmosphere where civility, respect, and safety are required and expected.”

“Perhaps the most important thing we – universities – can teach students is how to engage those with whom we differ,” said UW System President Ray Cross. “Modeling civility, reaching out intentionally to engage those who hold ideas and values we might find repulsive is not easy – especially in such a polarized society. But that is fundamental to what a learning community – and especially a university learning community – is all about.

“Our obligation as a System is to ensure that different voices are heard and that civility prevails,” Cross said.

In July, Behling called for President Cross and System Administration to review current policies related to freedom of expression and to develop potential changes that actively ensure all students have the freedom to express their views on campus.  Cross told Regents that once System staff started to analyze the multitude of existing campus policies and practices, it became clear that it might be wiser to create an overriding policy.

As outlined in UWS Administrative Code 17, chancellors currently have the ability to impose disciplinary sanctions, including suspension and expulsion.  The Administrative Code also outlines the various actions that could be considered disruptive.  The Board policy is intended to keep the definition flexible to allow an institution to determine severity of any action since no two disruptions are alike.

The new policy codifies the UW’s current practice that a university cannot compel a student or employee to take a certain position on a public policy issue. It also requires UW institutions to address the issue of freedom of expression during freshman and transfer student orientation, and provide regular communication to all students and employees of the policy.

Regent José Delgado, drawing on his own personal history, spoke in support of the policy. “I came to this country from Cuba when I was 14 years old. I lived under a government that tightened the grip on every aspect of human freedom. First was suppression of opinion … which ultimately led to violence. We must open our mind to rational discourse. I feel the pain of listening to someone with whom I vehemently disagree, but any limitation to this type of conversation cannot be accepted. And it would be a scandal to do so at our university.”

Coltan Schoenike, a UW-Stout senior and member of the Stout Student Association, addressed the Board and urged them to clarify the policy’s definition of disruption, calling it too vague.

Student Regent Ryan Ring supported the policy: “This policy disciplines individuals who repeatedly obstruct the expressive rights of others. What this policy does not do is discipline individuals for speaking freely and expressing themselves.”

“I am convinced this policy is not intended to chill free expression but to preserve it,” said Regent Bob Atwell.

The budget provides significant funding for the UW’s capital budget and the biggest compensation increase for state employees in a long time, Cross said. On the operational side, the UW System received $36 million in new funding – $28 million of which is in base – along with a restoration of $50 million which had been lapsed in the last biennium.

Challenges include a pay plan that isn’t fully funded, some increases in regulatory burden, and performance-based metrics plans.

In his regular report to the Board, Regent President Behling called the recently signed state budget “the best budget UW System has received from the state in a decade,” providing significant new resources for salaries, operations, and facilities.

Behling said the progress on compensation is one of the highlights of that budget, addressing a key concern of the UW’s chancellors and academic leadership. “We need to be able to recruit the best and brightest faculty members, and in order to do that, we need to increase salaries,” Behling said. He called budget action on this issue “critical and important.”

He commended the overall budget plan put together by the UW System and supported by chancellors and fellow board members.

In the UW System President’s report, President Cross told Regents that, in addition to budget advocacy, the UW System has continued to build its business and community relationships and shared interests. In recent months, Cross has traveled extensively across the state, visiting campuses, businesses, and community organizations.

On the federal front, Cross said UW System would continue to push for passage of the Federal Perkins Loan Extension Act, although the measure failed to advance by its sunset date on Sept. 30. “There is still considerable bipartisan interest in moving this forward among legislators, including strong Wisconsin support,” Cross said.

In his News from Around the UW System, Cross told Regents that UW-Parkside opened its SC Johnson Integrated Science Lab in August. The lab was made possible by state funding and a half-million-dollar gift from SC Johnson. 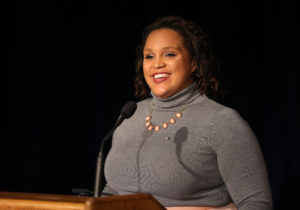 Parker said her experiences at UW-Stout and the opportunities for hands-on applied learning have prepared her for the future. She told Regents about a project in a marketing managing class where students worked on a company’s marketing strategy. “We were working on a real business, creating real ads and promotional tactics they could use,” said Parker, who is a McNair Scholar. “These projects gave me a competitive advantage.”

“UW-Stout prepared me for my future in so many ways,” she said.

In Other Business, the Regents:

The University of Wisconsin System Board of Regents will next meet on Nov. 9, 2017, in Madison.