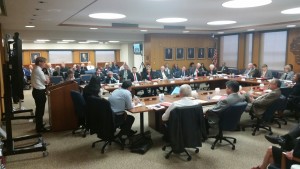 UW System Board of Regents at its July 2015 meeting

MADISON – The University of Wisconsin System Board of Regents voted 15-2 Thursday to approve a $6.194 billion annual operating budget for 2015-16 that includes significant reductions in fund balances.

“We are allocating roughly $180 million from fund balances to bring this budget into balance,” UW System President Ray Cross told the Board. “It is also important to understand the significant, projected reduction in our overall fund balances. We project our fund balances will decrease from $1.1 billion in fiscal year 2013 to $690 million at the end of fiscal 2016. That’s (a decrease of) nearly 40 percent in three years. It’s significant.”

As UW System’s Senior Vice President for Administration and Fiscal Affairs David Miller told the Board, the projected tuition carry-forward for the upcoming year will be about 8.4% of projected expenses in that fund – well below the board’s previous recommendation of a 10% minimum balance.

“The use of balances will help transition to the lower base level, but cannot begin to permanently offset the budget reductions in the 2015-17 biennial budget,” Miller said.

The use of balances to cover reductions must be “a short-term phenomenon,” Regent Jan Mueller said.

Cross noted that — reflecting major reforms implemented last year — carry-forwards for the five unrestricted fund balances are included as part of the university’s budget for the first time. The new reporting provides “a more complete and clearer picture that will help you better understand our financial situation and plans,” he said.

Responding to observations that the UW System’s upcoming operating budget is also its largest, Cross pointed out that the new accounting metrics include expenditures from fund balances, which were not previously part of the reporting equation.

Regent Chuck Pruitt, one of two Regents to vote against the budget resolution (Regent Tony Evers was the other), acknowledged his action was largely symbolic, but said he felt compelled to send a message about the profound effects of this budget. “For two budgets in a row, we have had a toxic blend of deep budget cuts and a tuition freeze,” he said.

Regent José Vásquez expressed concern that if the state’s economy faced additional challenges in the future, tuition freezes could continue. “At what point do we say ‘ouch’?” he asked.

“We’re there,” responded David Miller, noting that the System’s financial and institutional leaders are acutely aware of the situation, and “have deep concern about where we’ll end up at the end of this fiscal year. We have taken some accounting steps to improve those measures…but we really need to closely monitor the spending of fund balances to balance our budgets right now.”

“There is no question this is very painful,” said President Cross. “Explaining to the public the value and importance of this university will be critical in positioning us for the next budget.

With the Senate and Assembly having just approved a budget to be forwarded on to Gov. Walker for his signature, President Cross led a brief summary and analysis of the latest developments in the biennial budget process.

The bottom line is that the UW System is now looking at a $126.3 million ongoing reduction – a “dramatic improvement” from where we started, Cross said. The UW System originally faced an approximately $351 million biennial reduction (or about $194.4 million ongoing), given the cut and additional costs. Legislators reduced that cut by $50 million, restored funding for cost to continue, and kept UW in the state’s compensation reserve. Further, the legislature also restored $25 million of the cut in the form of a lapse, which will establish a higher base funding level for the 2017-19 biennial budget process.

“This is more evidence that even at the end of a very contentious and difficult budget, our new partnership with the legislature has put us in a position to be successful,” Cross said.

Regarding tenure, Cross reported that the UW System’s tenure task force will meet in August and work is already underway to develop a new policy. That new policy will replace the temporary “bridge” policy that was approved by the Board in June after the biennial state budget removed tenure from state statutes effective July 1, 2015.

Cross noted that institutions are engaging with faculty members and shared governance leaders as part of the process. “We all want to make sure we do this well,” he said.

Regent José Vásquez encouraged colleagues to approach the tenure discussions more as an opportunity to improve an important policy, not because tenure has been a problem.

The UW System is taking renewed measure of “what we do, how we do it, and why we do it,” according to new Regent President Regina Millner, who was elected to the post last month. “There are vital questions we must address, and the answers will impact the UW System for a generation to come.”

She acknowledged that while there is real hurt with the budget, “In making decisions, we must remember that as we deal with the present, our responsibility is to look to the future.”

Millner identified several key issues that will merit attention going forward: the culture of the academy, including academic freedom, tenure, and shared governance; financial responsibility; transparency and accountability; growing the Wisconsin economy and preparing students for careers; serving UW institutions and their students, faculty and staff; and fulfilling “our promise to all families who look forward to sending their students to one of our fine institutions.”

President Cross briefed Regents on the UW System’s strategic planning process, including a series of 14 listening sessions scheduled to be held around the state starting in September.

“We want to hear about business’s needs and citizens’ dreams for the future. We want to understand people’s vision for our state and create a dialogue about how our university system can make that vision a reality,” Cross said.

President Millner urged her fellow Regents to be actively engaged in the process. “I consider our involvement in this effort to be one of our most important responsibilities as a Board,” she said.

Regent José Delgado suggested that in addition to the listening sessions, more expansive polling should be employed to gauge broader public beyond community and business leadership.

“We have to look at the whole of how people are thinking of us,” added Regent Margaret Farrow. 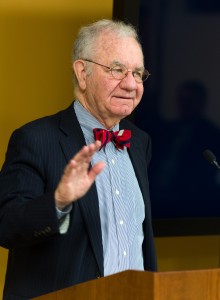 Walsh addresses the board

The Board bid farewell and presented a resolution of appreciation to Regent David Walsh, whose term on the board has ended. Walsh served 12 years as a Regent, including two years as Board president (2005-2007) and two years as vice president (2003-2005).

“The simple fact is that this great institution, revered throughout the country, has a very serious financial problem,” said Walsh, who noted that he had worked with 43 different chancellors over the course of his term. The combination of reduced state funding, a tuition freeze, and the forced use of reserves is “a crisis,” he said.

Walsh urged the Board and the UW System to appeal directly to the people of Wisconsin. “We have to frame the message so the public knows what they’re going to lose if the state doesn’t support the university,” he said. “We are Wisconsin, and that’s the message we need to send. We are the solution, not the problem.” 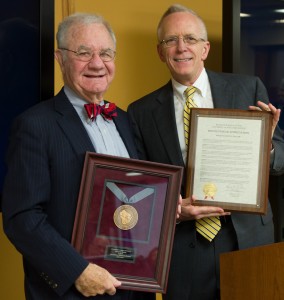 Regent James Langnes III, of Lake Geneva, was introduced as the new traditional student Regent to replace Anicka Purath, whose term had concluded. Langnes is a junior at UW-Whitewater majoring in finance.

“I’m excited to be here and to have the opportunity to serve the state of Wisconsin,” Langnes said.

“We must prepare our students to engage anywhere in the world. They need to be culturally competent,” said Associate Vice President Stephen Kolison, who led the presentation, “The UW System’s Role in Developing Global Leaders.”

In the same period, more than 9,200 international students representing 134 different countries attended a UW institution. About 59% of foreign students came from Asia.

Kolison pointed out that the contributions of international students include a $308-million injection into the Wisconsin economy as well as bringing global perspectives into classrooms and labs, general cultural enrichment, and out-of-state tuition dollars.

“It’s really a great opportunity to take what you’ve learned in the classroom and apply it, and come back with a wider, deeper breadth of knowledge,” said Rivers, who has gone abroad several times with Engineers Without Borders. “There’s also personal empowerment in traveling abroad and getting that cultural experience.”

“We know how life changing it is,” said UW-Milwaukee’s Patrice Petro.

Several elected student representatives addressed the Board regarding the role and responsibilities of student government in the UW System.

Graham Pearce, a second-year student at UW-Marshfield and vice-chair of UW System’s Student Reps, reiterated how mutually beneficial it is to create an environment where students can collaborate with administrators. He encouraged Regents and System leaders to find more opportunities for regular interaction with students.

Katie Cronmiller, president of the Student Government Association at UW-Stevens Point, pointed out that students at every campus have been closely involved in recent budget discussions because they recognize first-hand the hardships that campuses face. She also urged Regents not to misconstrue sometimes low turnout in student referendums as lack of interest.

Serving as a student representative is all about “having a voice, having a part, doing things for students,” said Joseph Sigwarth, vice president of the UW-Platteville Student Body.