WHITEWATER – The University of Wisconsin System Board of Regents weighed in on a bill currently moving through the state legislature that could potentially impose restrictions on research involving use of fetal tissue.

While Board leadership opted not to pass any resolutions at this time, noting that the current AB 305 could still see significant changes during the ongoing legislative process, UW-Madison Chancellor Rebecca Blank and nearly every Regent took the opportunity at Friday’s Board of Regents meeting to voice their perspectives.

“Labeling our faculty as felons for doing research that is state-of-the-art at any major medical school is not the right way to promote the University of Wisconsin and to build our strength,” Chancellor Blank told the Board.

“The legislation, in my view, in its current form is an overreach,” said Regent Gerald Whitburn. “It’s bad for the university, it’s bad for Wisconsin, and it’s bad for our citizens and our future citizens here and elsewhere.”

Regent Chuck Pruitt called defending and protecting academic freedom and the research mission of the UW probably the most important responsibilities of the Board. “This is an issue of profound importance with potentially very significant and not easily overstated implications for this university,” he said. “This has never been either an issue of pro-life or pro-choice, Republican or Democrat.”

For Regent Janice Mueller, who was diagnosed with cancer earlier this year, the discussion had personal impact. She recalled being given a pin during her treatment that said “Research Cures Cancer.” “There is no other answer,” she said. “It hurts me so much to think that children are suffering today as I did. And adults.” She encouraged her colleagues to do what they can to recognize the importance of research at the university, particularly that involving fetal tissue and cell lines. “It’s going to make a difference,” she said.

Regent President Regina Millner urged the Board to continue “efforts to review our ethical standards to confirm they are in fact the highest ethical standards and most stringent processes in the country for the acquisition and use of fetal body parts.”

Blank reiterated that the use of fetal tissue is very highly regulated by the federal government and UW-Madison actually goes “above and beyond” in adhering to the regulations.

Millner said the UW System and UW-Madison will continue to closely monitor the situation and will take additional action as needed.

President of the Board’s Report

As part of her report to the Board, Regent President Millner provided updates on several UW System task forces. She noted that the tenure task force, chaired by Regent Vice President John Behling, had recently held its first meeting. A tuition-setting policy task force, chaired by Regent Tim Higgins, was named in July and will have its first meeting on Oct. 15. The task force on shared governance, however, will not be convened because shared governance was not removed from state statute as originally considered.

President Cross updated the Board on reorganization within UW System Administration. He said there will be a net loss of about 36 employees (an approximate 12% cut) by the end of this year, due to a combination of attrition, strategically closing some open positions and redeploying others, and shifting some positions to campuses. 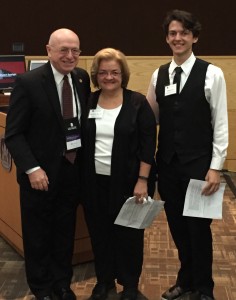 President Cross with Rochelle Day and her son, Josh Day

In the “Student Spotlight,” a UW-Whitewater student and UW-Whitewater alumna who share a special bond were highlighted: Josh Day, a senior double-majoring in math and computer science, and Rochelle Day, his mother, who returned to school at age 50 and earned a bachelor of Business Administration degree from UW-Whitewater in 2012.

“Coming back at my age wasn’t easy,” said Rochelle Day, but “the caring faculty gently but firmly pulled me out of my comfort zones and pushed me to new academic experiences.” She is now employed in UW-Whitewater’s Institutional Research and Planning department.

Josh Day noted that one of his earliest exposures to UW-Whitewater was when he was allowed to sit in on one of his mother’s calculus classes, where he said interest, passion and talent for mathematics were ignited.

As part of his regular report on news from around the UW System, Cross noted that UW-Green Bay is celebrating its 50th anniversary this year.

Following up on committee discussions the previous day, the Regents approved a resolution approving the transmittal of new accountability reporting metrics to the State Legislature.

Cathy Sandeen, Chancellor of UW Colleges and UW-Extension, provided Regents with an overview of the recently announced significant administrative reorganization at the 13 two-year UW Colleges campuses. The changes are in response to a nearly $5-million cut in state funding.

Instead of having one dean at each campus, the institutions will now be clustered into four geographical regions – with a single dean overseeing each region. Other leadership positions and services at the campuses will also be consolidated.

Throughout this process, Sandeen said, the goal has been safeguarding the students’ high-quality educational experience and maintaining the UW Colleges’ commitment to providing access and opportunity to the citizens of Wisconsin.

Chancellor Sandeen, UW-Extension Provost Aaron Brower, and UW-Extension Dean of Continuing Education, Outreach and E-Learning (CEOEL) David Schejbal updated the Board on the UW Flexible Option, which was launched less than two years ago.

There were nearly 700 enrollment subscriptions to UW Flex in the past year, triple the number from the previous year.

“We are bringing a whole new group of students,” Sandeen said, noting that the vast majority of flex students are considered nontraditional, or working adult students.

Sandeen told Regents that its most popular current programs – information science & technology and the R.N. to B.S.N. (bachelor of science in nursing) programs, both offered with UW-Milwaukee – are expected to break even by the end of 2016-17.

The University of Wisconsin System Board of Regents will next meet on October 8-9, 2015, in Madison.