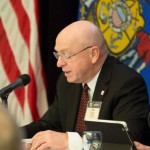 “At the end of the day, we are all yearning for a future Wisconsin that’s not repeatedly and always focusing on how to defend our budget, but how to craft together a budget that will improve the lives of the people of Wisconsin,” said Cross, addressing Regents at a board meeting hosted by UW-Milwaukee.

“The future of this university and this state are inextricably connected,” Cross said. “We must rededicate ourselves to our mission. That’s the only way we can move toward a successful budget in the future. People in this state must see us as a partner, a valued partner in their lives.” 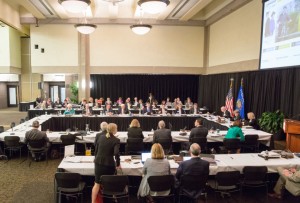 June Board of Regents meeting hosted by UW-Milwaukee

As part of a broad discussion, Regents heard a detailed analysis of the omnibus motion forwarded on May 29 by the Joint Finance Committee. The 70-point motion, among its many provisions, reduces the Governor’s proposed budget reduction for the UW System by $50 million to $250 million, keeps shared governance language in state statutes, and enables the movement of faculty tenure practices to Board of Regents policy.

The move was prompted by action taken by the Joint Finance Committee on May 29, 2015, to remove statute 36.13, Wis Stats. – the provision regarding tenure – from Chapter 36.

“We want to make sure and guarantee that tenure remains as a tenet, as a pillar of higher education,” Cross said.

While Regent Tony Evers, the state superintendent of K-12 schools, recommended an amendment that called for legislators to remove non-fiscal issues like tenure from the budget, the Regents opted to approve a subsequent amendment forwarded by Regent Gerald Whitburn. That amendment called for the System’s recently-formed tenure policy task force to specifically review provisions related to layoffs.

David Vanness, an associate professor at UW-Madison’s School of Medicine and Public Health, told Regents that an online petition — currently with 2,500 signatures from around Wisconsin and beyond — expresses grave concerns about tenure protection and academic freedom. “The whole world is watching what we do in Wisconsin,” he said.

Richard Leson, an associate professor of art history at UW-Milwaukee, questioned the rationale for tenure to be up for debate. Statutory protection of tenure is “an extraordinary tradition and therefore ought to be respected,” he said.

Cross reiterated that the layoff issue has to be addressed. “If a tenured faculty member can be arbitrarily dismissed, then that’s not tenure,” Cross said. “There has to be a process, as there is now, that is thoughtful, rational, and reasonable and it has to be developed collaboratively.”

The task force, scheduled to begin meeting in late August 2015, will be asked to review tenure policy and recommend any needed changes. The policy developed by that group, once approved by the Board, would supersede the policy adopted at the June 2015 meeting. In accordance with the approved resolution, the new tenure policy should come before the board no later than April 11, 2016.

UW-Milwaukee is ‘vital to the future’ 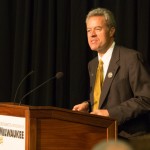 Host Chancellor Mark Mone urged Regents to work with chancellors and the Legislature to “help preserve the value of our degrees.”

Calling it “one of the most important addresses I’ve ever given,” Mone asked the Regents to protect faculty tenure, indefinite status for academic staff, and shared governance. He also warned of the profound effects that significant budget cuts could have on higher education at UWM and in Wisconsin.

“It will be difficult to motivate and retain our exceptional faculty and attract new faculty if there is uncertainty regarding their status and roles,” Mone said. “Without our faculty and staff, we cannot teach, we cannot conduct research and we cannot engage with the community.

He emphasized the importance of the university’s role in students’ success, meaningful national and international research and more than 2,100 partnerships with community organizations and businesses. 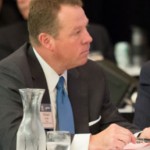 The Regents welcomed two new colleagues who have been appointed to the Board by Gov. Walker: Michael M. Grebe and Drew Petersen.

Grebe is currently executive vice president and general counsel for HUSCO International, a global leader in hydraulic components. He previously was a partner at Quarles & Brady LLP. He is a graduate of Dartmouth College and University of Wisconsin Law School. 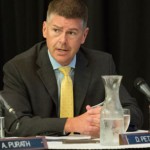 Petersen, currently vice president of external affairs and corporate communications for TDS Telecommunications Corp., served on the UW System Board for the past two years as the statutory delegate for the Wisconsin Technical College System, where he also serves as president of the board.

Gov. Walker has now appointed Petersen to a seven-year term on the UW System Board.

Chancellor Telfer, who is stepping down at the end of June, said he is honored to have served the UW System for 30 years. 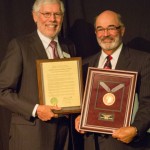 Regent President Emeritus Falbo, whose term on the board recently concluded, noted that the System has “worked diligently to improve relationships with the state and the legislature, to improve communication and enhance understanding of different perspectives.”

“As I prepare to leave this Board, I know we are in good hands, with President Cross, the people around this table, the people in this room,” Falbo said.

UW-Milwaukee Athletics: UW-Milwaukee officials presented the Board with their NCAA Division I Athletics 2014 Annual Report, noting that FY2015 marked the first balanced athletics budget in 15 years.

The Business and Finance Committee approved a revised Regent Policy Document 6-4 regarding search and screen procedures for chancellors, senior vice presidents and vice presidents. The revisions are intended to provide a stronger role for the Board in the selection of chancellors by having Regents chair the search and screen committees, and also removing the requirement that institution faculty make up the majority of the members on those committees.

The revisions also clarify the roles of the UW System president and Board of Regents with respect to the selection of senior UW System Administration leadership positions.

Regent Tim Higgins said that he believes the policy changes will help promote the University’s mission into their home communities and regions while strengthening the search for a new leader. The increased involvement of stakeholders will help searches get “into the greater community,” inviting more local leaders to the table. 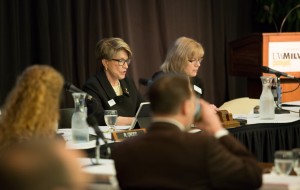 Regent Vice President Regina Millner added that additional regent input will “enrich the questions asked of candidates,” particular on university finance and budget challenges that are very much of Regent concern.

The policy will be forwarded to the full Board for action on Friday.

In other action, the Business and Finance Committee:

Leading a panel discussion, Ward noted that the pool of capital for angel and venture investment in Wisconsin is small, but growing. Understanding the risk/reward profile that attracts capital from these investors can help ensure that innovative products and new ideas achieve market success more quickly and efficiently, he said.

The UW System Board of Regents meeting will resume on Friday, June 5, 2015, at UW-Milwaukee.