Salaries in UW System don’t measure up, board hears

University of Wisconsin System Board of Regents meeting
News Summary

MADISON — The state of Wisconsin may be asked to consider additional compensation for university employees following a committee recommendation during Thursday’s (Nov. 4) meeting of the University of Wisconsin System Board of Regents.

Salaries for faculty, staff and academic leaders within the UW System are seriously falling behind their peers at other universities, said Business and Finance Committee Chair Mark Bradley of Wausau, who submitted a report to the full board about the need for competitive compensation.

Bradley explained that while faculty are not necessarily behind in terms of salaries paid to other workers in Wisconsin, the state must consider the market from which these employees are recruited.

Bradley explained that in considering compensation levels for university employees, the board is required by state statute to take three steps:

Members of the Business and Finance Committee voted Thursday to approve a resolution that would establish new salary ranges and salaries for seven chancellors who would be paid below the minimum allowed by those ranges.

The committee also approved a resolution to recommend an additional 2 percent pay plan increase in each year of the 2005-07 biennium for faculty, academic staff and university senior executives  This increase, coupled with the recommendation the Regents included in their biennial budget request, would bring the total pay plan increase to 5 percent.

Both resolutions will be considered for a vote by the full Board of Regents on Friday (Nov. 5)

Bradley stressed that no employees were granted pay raises with Thursday’s committee approval of two resolutions that would accomplish those goals, nor did the regents consider any adjustments to tuition levels.

Stephanie Hilton, president of the United Council of UW Students, testified that students understand the need to competitively compensate faculty and staff, but they are adamant in their stance that the necessary funding must come from sources other than student tuition dollars.

“If you keep your word on the 5 percent tuition cap, students will be there with you throughout the budget process,” Hilton said. “Seems like the [pay plan] has to be funded. There is no alternative.”

UW-Madison junior Josh Healey, a member of the Multicultural Student Coalition, said any available funding should be used to alleviate the tuition burden on students, many of whom struggle to pay tuition at current levels.

Regent Roger Axtell of Janesville reminded the board that like the 2005-07 budget request passed last month, any recommendations the board would approve on Friday would be “in pencil.”

“There are a lot of erasers down the line,” Axtell cautioned. “We’ve got a lot of variables in the air. There is no magic formula.”

Regent Jesus Salas of Milwaukee said he would like campuses to contribute savings from administrative efficiencies toward increases in salaries for academic leaders, rather than funding those increases solely from tuition.

Regent Chuck Pruitt of Shorewood said he strongly supported raising the ranges for Chancellors, saying they have “paid a ‘loyalty tax’ for too long.” Pruitt moved that the board remove a recommendation in one resolution that the salary ranges of two vice presidents be raised pending further study, an amendment the committee approved.

Regent Jose Olivieri noted the point that a 6.3 percent increase in each year of the biennium would be necessary to “catch up” employees to their peers, and wondered why the recommendation was only for 5 percent.

Bradley explained that he recommended the lower amount as the board should be mindful of Wisconsin’s economic position, but that no increase would further exacerbate the discrepancy.

The board agreed to consider on Friday a motion by Regent Peggy Rosenzweig of Wauwatosa to reaffirm the board’s commitment to tuition increases of 5 percent or less in the coming biennium. Regent Elizabeth Burmaster of Madison said she would support that affirmation to give students and families “peace of mind” during the state budget process.

A motion by Regent Gerard Randall of Milwaukee to remove language in the resolution that the state consider offering domestic partnership benefits to state employees failed for lack of a second.

Regent Danae Davis of Milwaukee said that in her business experience, domestic partnership benefits can be a very effective recruiting tool, and Regent Pruitt noted that UW-Madison and Penn State are the only Big Ten campuses that do not offer those benefits.

The board began its full board session Thursday with a presentation on the “Role of Liberal Education in American Higher Education” from Dr. Carol Geary Schneider, President of the Association of American Colleges and Universities. 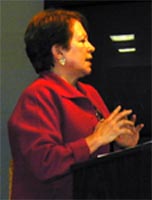 Dr. Carol Geary Schneider, President of the Association of American Colleges and Universities

Schneider asked Regents to share their thoughts on the importance of liberal education to student learning in the 21st century.

Student Regent Beth Richlen noted that students do not typically come to the university looking forward to their liberal arts course work, which often prevents them from enjoying the broad range of topics they can explore.

Regent Burmaster highlighted the connection of liberal studies to expanding student conceptions of the global society in which they live, saying that today, “liberal education is an international education.”

Schneider shared with the Regents some feedback from recently conducted student focus groups on the importance of college experiences. Students interviewed ranked developing civic responsibility and orientation to public service as their least valued outcome for their college education, she said, noting that this low ranking may be due to a lack of understand about what civic engagement really means.

Schneider recommended three ways that Regents could become more involved in promoting the importance of conceptualizing and promoting new thinking about liberal education on campus.

“Make yourself the locust for this [public] discussion between the Academy and the state,” she said, adding that Regents could engage academic departments in discussion, and move away from the notion that the System needs to compare itself to other peer institutions.

Instead, Schneider challenged the Regents to become a national leader in this area by setting benchmarks for improvement that others will follow.

The board’s Education Committee opened Thursday by continuing discussion with Dr. Schneider about ways the board can strengthen and support liberal education on UW System campuses.

Schneider emphasized the distinct need to have a thoughtful discussion between the university and the community about supporting the development of students as citizens. Chancellor Don Mash of UW-Eau Claire noted that in discussing this issue, the board must appreciate the experiences the university provides to students beyond the classroom.

Regent Danae Davis expressed to committee members that she felt a profound impact being in the company of such dedicated speakers, students and staff members. Regent Richlen also noted that the campus representatives in charge of their campus’ Plan 2008 programs gave real meaning to what steps and goals will be created in Phase II of the initiative.

The oldest of the charter schools in Milwaukee is only five years old, while others are opening their doors for the first time this fall.  Dr. Kattman also noted that a number of charter schools actually convert from private institutions to charter-based schools, like the Marva Collins Preparatory Academy and the Woodlands School, which have helped the schools mature more quickly then a typical new charter school operation.

The committee members also adopted Revised Faculty Personnel Rules from UW-Eau Claire. Chancellor Mash told committee members that these rules helped to clarify and add substance to the process of post-tenure review for their faculty members.

In other business, the committee heard first readings of the following program authorization proposals:

In a session following the pay plan discussion, the committee:

Similar to past reports, this report will be general in nature, and will identify the process by which budget reductions will be made, should that be necessary.

The Business and Finance Committee reconvened at Grainger Hall for the Public Forum on Trust Funds Investments.

The Committee heard from speakers who asked the Board to be more active in following its guidelines on social responsibility and to consider proactive screening of companies.

In particular, the speakers hoped the Board would take a more active role in divestiture in the future, especially in Caterpillar Inc., Halliburton and Tyson Foods.

Regent Jesus Salas noted that the project has been discussed extensively by the Board since 2002, and commended the UW-Milwaukee campus for being very sensitive to the interests and concerns of the local community. Half of the redeveloped property will be used by UW-Milwaukee Peck School of the Arts, while the other half will include residential condominium.

Two UW-Milwaukee students spoke in support of the project, explaining how film students use the space to build sets and conduct film screenings.  The central space also facilitates creative exchange between students.

To facilitate the redevelopment of the UW-Milwaukee Kenilworth Building, the Board of Regents authorized a building purchase that will facilitate the re-location of several tons of rock and soil.

The Wisconsin Geological and Natural History Survey, part of UW-Extension, currently keeps its extensive library of geologic samples in the Milwaukee Building. By purchasing a 25,000 sq-ft building in Mt. Horeb, UW-Extension will bring this collection significantly closer to the Madison-based scientists who most often use the material. Currently, geologists spend up to a half day traveling to Milwaukee to retrieve samples.

UW-Madison’s School of Medicine received approval for phase one its Interdisciplinary Research Complex. This building, to be located adjacent to the UW Hospital in Madison, is the final phase of the school’s Healthstar Initiative, begun in 1997. Dean Phil Farrell described how the new research space will help UW-Madison compete for grant funding from the National Institutes of Health.

Farrell explained that the NIH looks for multi-disciplinary research teams, and research that translates medical discoveries into practical applications. Research conducted in the new facility will focus on molecular medicing, image science and regenerative medicine, with a goal of addressing major health issues such as cancer, cardiovascular health and neurological disease – all critical issues for the nation’s aging population.

UW-Madison’s School of Business was given the green light to proceed with an expansion of Grainger Hall, with occupancy of the new space expected by the Fall of 2007. The new wing will dramatically re-shape the façade at the corner of University Avenue and Park Street, and provide new space for graduate school programs.

UW-Stevens Point received authority to rename its student center as the “Lee Sherman Dreyfus University Center,” honoring the former chancellor, regent and governor. Chancellor Linda Bunnell spoke in support of the re-naming, saying that Governor Dreyfus’ impact on the campus is still felt today, especially his tendency to involve students in major decisions affecting the university.

“The students are fully in favor of this. And that’s important, since they own the building,” she said.

“All of us, without exception, have had some personal contact with former Governor Dreyfus,” said Regent Salas. “But the communication we’ve received from students, in support of this project, has been most exciting.”

The Board of Regents will resume its November meeting at 9 a.m. Friday, Nov. 5 in Van Hise Hall on the UW-Madison campus.