University of Wisconsin System Board of Regents February Meeting, Day One News Summary 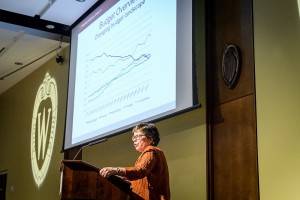 UW-Madison Chancellor Rebecca Blank speaks about the potential impact of proposed cuts to state budget funding during a meeting with members of the UW System Board of Regents in Varsity Hall inside Union South at UW-Madison. (Photo by Bryce Richter / UW-Madison)

As spelled out by the Governor earlier this week, the budget includes proposals to provide the university with public authority status and a new dedicated funding source. It also included a proposed $300 million cut in funding over the 2015-17 biennium.

“In my opinion, in this state and at this time, a UW System authority is the best model to govern and deliver a public university committed to the core principles of academic excellence, access, responsiveness, and affordability for our students, parents, and taxpayers,” Cross said.

That authority along with a proposed dedicated funding source should enable the university to manage operations more efficiently with greater long-term cost savings, and make tuition more stable and predictable.

At the same time, Cross said, the proposed cuts are “a serious and critical challenge.”

He acknowledged that there are still many areas where questions remain and much analysis needs to be done. Cross said System and institutional leaders will be closely assessing the impact of the proposed cuts and will present their findings at the March Board of Regents meeting. 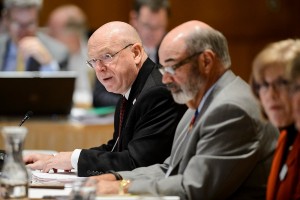 The Regents engaged in a lengthy discussion of the budget proposal and its ramifications.

Regent Mark Bradley said the Board has a duty to advocate for the best interests of public higher education in Wisconsin by participating in the narrative with facts and analysis.

Regent Tim Higgins reminded colleagues that legislators and the Governor are also dealing with obligations and difficult decisions in the challenging economic situation. “We have to work in a collaborative process to determine what works best for the citizens of Wisconsin,” he said.

Chancellor Blank addresses the Board

Host chancellor Rebecca Blank of UW-Madison told Regents that a proposed $300 million cut in state support for the UW System would reduce student programming, lead to job lapses and layoffs, and reduce financial aid and access to the university. 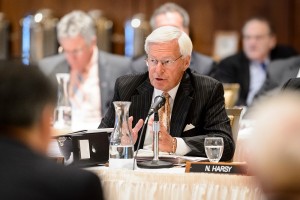 Regent Gerald Whitburn makes a comment during the Board of Regents’ discussion. (Photo by Bryce Richter / UW-Madison)

Blank said a cut of the magnitude proposed would leave a $91 million budget hole at UW-Madison in the next year – including $57 million in general purpose revenue, $6 million in loss of state support for the Wisconsin Bioenergy Initiative and municipal service payments, a $23 million reduction in continuing costs that were covered in the current year by reserve funds, and an expected $5 million in expected costs to retain the best faculty and staff.

She said the budget hole facing the UW in the coming year is the equivalent of eliminating 650 faculty positions or 1,083 staff positions. “I don’t know how I am going to cope with these cuts come July 1,” she said, adding that the cut is the largest decline in state dollars in university history.

“This is a time to invest and grow and continue to build,” Blank said. “I can promise you our competitors are not standing still.”

“We have a legacy of service to this state and this nation, and I want to build on that,” Blank said.

As part of the annual report on program planning and review activities, Kolison noted that 60% of the program array is devoted to undergraduate education. Further, he pointed out that STEM (science, technology, engineering, mathematics) programs account for more than a quarter of the entire academic degree array. Business- and health-related programs each account for 9%.