The UW System Board of Regents held its March 5, 2015, meeting at the Gordon Dining and Event Center on the UW-Madison campus.

MADISON – The University of Wisconsin System Board of Regents voted unanimously Thursday to support a resolution calling for the legislature to substantially reduce the proposed base funding cuts to the UW System recommended in the Governor’s budget.

The resolution further requested that the legislature grant long-sought flexibilities to the System, including a dedicated funding stream for state-supported UW operations, as well as appropriate technical changes to the budget “to allow the System to more effectively and efficiently implement those flexibilities, manage its operations, and serve the students and taxpayers of Wisconsin.”

After lengthy discussion, the Board asked the legislature to grant flexibilities “either through an agreed-upon public authority or an appropriate amendment to State Statutes.”

In his opening remarks to the Board, UW System President Ray Cross said, “With packaged flexibilities, we will be in a better position to reduce the cost of building projects, to improve financial management, to reward meritorious employees and to modernize purchasing processes throughout the system. Those savings are redeployed into classrooms and programs. Those are the ways a more nimble, agile, yet stable UW System should operate, and they are the goals of the reforms I have been pursuing since last year.”

Reflecting on testimony that he, Regent President Michael Falbo, and UW-Eau Claire Chancellor Jim Schmidt had provided before the Joint Finance Committee earlier in the week, Cross noted the UW System’s appreciation for legislators’ willingness to help reduce the size of the proposed budget cut.

President Falbo also called for the appointment of two high-priority workgroups – or task forces – to recommend new Board of Regents policies on shared governance and tenure by fall of 2015.

Among the changes proposed in the Governor’s budget are the deletion – effective July 1, 2016 – of the sections in Chapter 36 of the Wisconsin Statutes that describe shared governance and tenure. These sections would be repealed along with many others in Chapter 36.

“If shared governance and tenure are going to be removed from state law, I believe we should take the opportunity to create solid policy statements in these two areas that are so fundamental to our System,” Falbo said.

Looking ahead, President Cross said, “I am really concerned about this university for the future. This volatility and instability is not good for an organization for long periods of time.” He also expressed his concern about the difficulty of attracting and retaining outstanding faculty and staff in the face of ongoing compensation challenges. “This will not be a great university without those folks,” he said.

“Everybody is interested in how to acquire the tools that will allow them to be more effective teachers and I think students are appreciative of those efforts,” said Bob Hoar, chair of the Learn@UW Executive Committee and associate vice chancellor for Academic Affairs at UW-La Crosse,

From his own experience, Student Regent Nicolas Harsy said the new technology “has made my experience here significantly better.

Rhodes Scholar in the Student Spotlight

Tayo Sanders, a UW-Eau Claire senior majoring in materials science, addressed the Board as part of President Cross’ Student Spotlight feature. Earlier this year, Sanders was named a Rhodes Scholar, one of just 32 Americans to claim the honor for 2015. It’s the second time a UW-Eau Claire student has earned the distinction in the past decade.

Sanders credited his professors at UW-Eau Claire and teachers at Kimberly High School with kindling his curiosity in science, and teaching him how to ask the right questions and how to listen and be respectful of the ideas and opinions of others. He called his undergraduate research opportunities “a life-changing experience.”

“So much of my experience has been the result of the ability to interact with professors,” Sanders said. He urged other students to seek out the opportunities that are available and to take advantage of them. 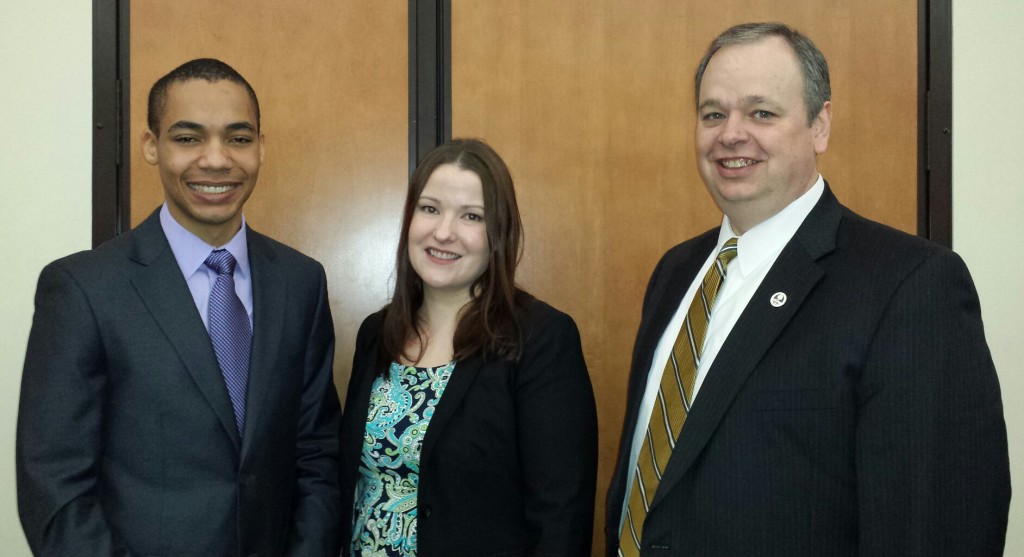 The next meeting of the University of Wisconsin System Board of Regents will be April 9-10, 2015, at UW-Waukesha.