MILWAUKEE – The University of Wisconsin System Board of Regents on Friday honored this year’s recipients of the Academic Staff Awards for Excellence, the highest recognition bestowed on members of the UW System’s academic staff.

Regent John Drew, who chaired the selection committee, said that with this award, Regents “salute the hard work, dedication, and creative thinking of our talented academic staff members.” 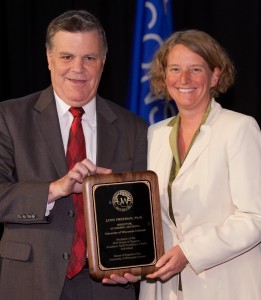 The first to receive an award was Lynn Freeman, who has developed UW-Oshkosh’s university advising program to reflect national standards and continues to improve practices dealing with student success across campus.

“In advising, we help students explore, find out about themselves, and set goals,” said Freeman, noting that early interactions between students and advisors can play a vital role in student engagement and success. She also commended the “passion and commitment” of UW-Oshkosh to the project.

Regent Kevin Opgenorth introduced Dale Braun, who has served on the UW-River Falls campus for more than 20 years 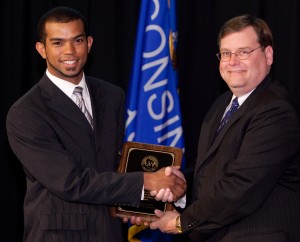 and has overseen the planning for a plethora of campus projects. “Dale’s colleagues say it is not just his skill in the area of planning that leads to the high demand for his leadership,” Opgenorth said. “It is also his ability to think creatively, to work effectively with others, and to see the long-term impact of decisions.”

In accepting the award, Braun said he believes that all staff on campus are ultimately educators, regardless of what they do. “When you see students and work with them individually, you recognize the influence you have on them every single day.  Even little things make a big difference,” he said. 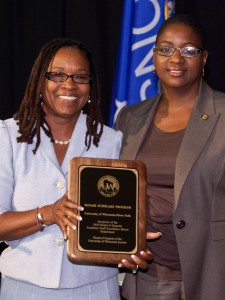 “The activities of the McNair program significantly impact the campus culture, by promoting undergraduate research and scholarly endeavors, increasing the number of students who consider graduate degrees, and raising UW-River Fall’s national visibility and reputation for excellence,” said Regent Betty Womack, in presenting the award.

“To be chosen from among the entire UW System during our 10th anniversary year is nothing short of extraordinary,” Lawrence-Porter said. She said her work with the McNair program at UW-River Falls, where more than half the students are first-generation college students, reaffirms how education can “change the trajectory of students’ lives and that of their families.”

The Competitive University Workforce Commission, comprised of private- and public-sector leaders, told the Board of Regents Friday that the current compensation system and level of compensation for UW System faculty, academic staff, and academic and administrative leaders are not adequate.

Citing the group’s final report, Regent Vice-President Michael Spector, co-chair of the commission, told the Board: “If not remedied in a timely fashion, the Commission believes that these deficiencies could have a damaging effect on the UW System, the UW System’s ability to achieve the goals of its Growth Agenda for Wisconsin, and on the quality of life in Wisconsin.”

President Kevin P. Reilly, who appointed the Commission in February, told Regents that the recommendations forwarded by the Commission will not look all that new, but the bearers of the message are.

Spector pointed out that both publicly and privately held companies are changing the way they do business in the current economy. They’re focusing on greater efficiencies, greater use of technology, greater alignment of the mission and its operations, more emphasis on pay for performance measured by metrics, and real accountability.

There is also more emphasis on entrepreneurship, Spector said, and new approaches to solving problems.

“My personal view is that a major challenge going forward to faculty, academic staff, chancellors, System leaders, provosts, and deans is how to develop a culture that synthesizes the best of shared governance and academic freedom with these private sector characteristics. We have to do that,” Spector said.

Spector said the Commission also called for giving the University greater freedom to operate than it currently has. “It’s important to recognize that the university system and its mission…are different than what other state employees do.”

Regent Judy Crain asked if the very competitive fringe benefits offered in the UW System tended to offset any of its shortcomings in salaries.

Al Crist, Associate Vice President for Human Resources and Workforce Diversity, responded that UW salaries generally are so much lower than peers that fringe benefits wouldn’t compensate in most marketplaces.  “Others will counter with higher salaries versus our higher benefits,” he said.  It was also pointed out that the value assigned to fringe benefits varies greatly by age.

UW-Madison Chancellor Biddy Martin urged the Board to take up the workforce compensation issue with “a very strong sense of urgency.”  “I believe if there is no pay plan, if there is no restoration of rescission, and if there are furloughs for another three years…we will see the departure of great faculty,” Martin said. “I feel the situation is urgent, and it’s important to help people understand what it means to operate not just in a national market but in an international market.”

Regent Tom Loftus added that any talk of pay plans must also include explanations of what the University will do and offer in return.

The Commission’s findings, along with advice from Reilly’s Compensation Advisory Committee, will be used in developing the UW System’s 2011-13 biennial budget proposal, to be presented to the Board in August.

Reilly called the commission’s report “a very good platform from which to press our case with the development of a state budget.”

In his regular report to the Board, Regent President Chuck Pruitt reiterated to Regents the need to “make our case,” to broadly communicate the University’s mission, goals, and role in driving the state forward.  “It is not enough to convince us that we are doing the right thing. We must also engage others in pushing the cause of the UW System’s Growth Agenda and its long-range goals.”

He updated the Board on a planned “barn-storming tour,” a series of face-to-face meetings and presentations with editorial boards, media outlets, and other opinion leaders across the state. “We need to engage the citizens of Wisconsin in this conversation,” Pruitt said.

Pruitt also shared a statement from Regent José Vásquez, who was not present at the meeting, concerning a recent letter to Senators Charles Schumer, Lindsey Graham, Dick Durbin, and Richard Lugar endorsing the DREAM Act, also known as the Development, Relief, and Education for Alien Minors Act. The letter, initiated by Vásquez, was co-signed by President Reilly and many members of the Board.

Noting his own family’s history of coming to America from Mexico more than 50 years ago, Vásquez wrote, “The DREAM Act is also about the United States of America, which embraces the intelligence, the creativity, skills, and talents of all of its populace. The richness of this country was not built solely by native-born citizens … The only thing that matters is the desire to build a future and in turn benefit this country.” 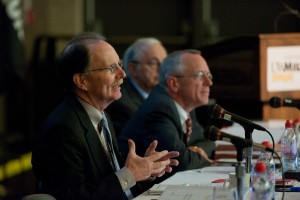 As part of his report, President Reilly informed the Board that the WiSys Technology Foundation and the UW-Madison Office of Corporate Relations will be collaborating to advance entrepreneurship education at UW System campuses. “To become entrepreneurs themselves, students need both education and exposure to the principles and practices of entrepreneurship,” he said.

As part of this new collaborative effort, UW-Madison’s Office of Corporate Relations will support the development of entrepreneurship courses by WiSys. The efforts are underwritten by a five-year grant from the Ewing Marion Kauffman Foundation of Kansas City.

Michael Morgan, the current Secretary of Wisconsin’s Department of Administration, has agreed to join the UW System as the new Senior Vice President for Administration and Fiscal Affairs, President Reilly told the Board.

Morgan will succeed Tom Anderes, who is leaving to become President of the University of Arizona System. Morgan’s three-year appointment is effective July 6.

“He brings unmatched experience and leadership qualities to the UW System, at a critical time in our history,” Reilly said.

Morgan’s term will align with the three-year “glide path” for the UW System’s Human Resources System project to go live and be implemented. He also has “the know-how and insight we need to help us successfully traverse the choppy waters” in challenging economic times, Reilly said.

Echoing the feedback of other Board members, Regent Mark Bradley called it “great news.”

After some discussion, the Board approved plans to rebuild the Charter Street heating plant on the UW-Madison campus in order to comply with the Clean Air Act and a 2007 court agreement.  The plans call for new natural gas boilers and a biomass boiler to replace the existing coal-fired boilers.

Regent Jeff Bartell acknowledged uncertainties associated with the project, including terms of funding and operating costs. “You have to begin somewhere,” he said. “The questions running over in my mind are, is this the time to do this? Is this the way to do this?”

Voicing his support for the project, Regent Tom Loftus added, “We have a chance to create a market which will in turn create industries. By creating demand for biomass fuel, we will change industry in this state … and change a culture from coal to resources that we have in this state.”

Regents and colleagues recognized for service 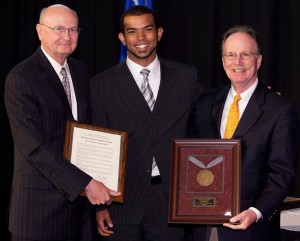 The Board recognized departing Student Regent Kevin Opgenorth, whose two-year term of service has ended.

Opgenorth, who recently graduated from UW-Platteville, told the Board he’d learned a lot and developed a passion for higher education while in their company over the past two years.  “I am confident the UW System will remain a beacon of light in this state with your guidance,” he said.

Regents also recognized UW Colleges and UW-Extension Chancellor David Wilson, who is moving on to new challenges as the next President of Morgan State University in Baltimore.

Regent Danae Davis, who presented the resolution of appreciation, called Wilson “a scholar and a gentleman,” and someone who exemplified the courage of his conviction.

Regent Mark Bradley informed the Board that the new UW Center for Civic Engagement at UW-Marathon County would feature the David Wilson Reading Room, complete with a plaque commemorating Wilson’s inspirational personal story.

Wilson, in moving acceptance remarks, recalled his youth in rural Alabama, and how his sharecropper father sent him off to college with a five dollar bill. “My work here in Wisconsin has been about a return on that investment.” 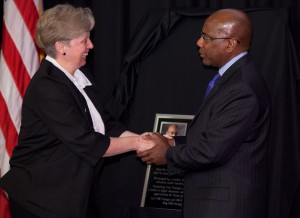 “For someone whose father couldn’t read his name if you wrote it across this wall in 12-inch letters, to now have a reading room named after him…is just an extraordinary testament to the power of determination over the evils of weakness,” Wilson said.

Carol Sue Butts of UW-Platteville and Mark Nook of UW-Stevens Point were each recognized for their service as Interim Chancellors at their respective institutions. “They each took over at a challenging and interesting time, and led their institutions with great energy and dedication,” Pruitt said.

President Reilly led the Board in recognizing Senior Vice President Tom Anderes, who is leaving UW System to become President of the University of Arizona System, reporting to its Board of Regents.

The Board also offered its thanks and appreciation to Sharon Wilhelm, from UW System’s Office of Policy Analysis and Research (OPAR), who is retiring after 33 years.

The UW System Board of Regents will hold its next meeting July 23, 2010, in Madison