MADISON – The University of Wisconsin System Board of Regents on Friday honored this year’s recipients of the Academic Staff Awards for Excellence, the highest recognition bestowed on members of the UW System’s academic staff.

“The Board is very pleased to recognize and honor these winners, whose outstanding work helps to strengthen and invigorate not only our UW institutions, but the communities in which they serve,” said Regent John Drew, who chaired the selection committee. 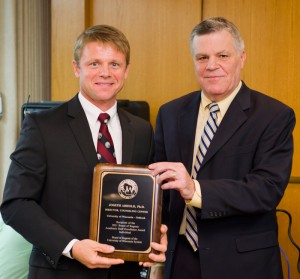 Regent Brent Smith introduced Joseph Abhold, who has been the Director of the Counseling Center at UW-Oshkoshsince 1999. “In that time, he has played a significant and transformative role in campus-wide student success and retention activities. He has also assumed leadership of some of the more challenging issues on campus, including alcohol use, tobacco use, violence prevention, victimization, and diversity awareness,” Smith said.

Abhold said his own college experience helped him to recognize how a student’s well-being and success are intimately connected. Growing up in rural Wisconsin as the youngest of nine children and the first in his family to go to college, Abhold said he “felt like an alien” when he first arrived as a student on the UW-Oshkosh campus.  What he discovered, he said, is that “there were people all over campus willing to help me navigate the maze of higher education.”

“I learned how engagement is an antidote to apathy, and how academic staff both in and outside the classroom play a pivotal role in that engagement,” Abhold said. “I now understand my path through college was not an aimless wandering to a serendipitous destination, but it was directed by caring guides who shaped and nurtured my aspirations.” In thanking the Regents and UW System for all they do even in challenging times, Abhold noted, “I am the product of the UW System, of the simple idea that with a little help, people like me can go on to help others.” 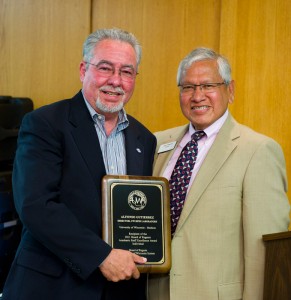 Regent José Vásquez presented the second individual Award for Excellence to Alfonso Gutierrez, of UW-Madison’s Radio Frequency Identification (RFID) Lab.  “Over the past 9 years, his leadership and critical research support for several innovative multidisciplinary university-industry partnerships has placed the College of Engineering and the campus in the international spotlight and garnered recognition for UW-Madison as a preeminent center for thought leadership in RFID industries,” Vásquez said. He added that Mr. Gutierrez is known for “bringing forward innovative ideas and has a knack for finding creative solutions to industry problems.”

Gutierrez, a native of Colombia, told the Board that a fragment of a poem by a Chilean poet – “Thanks to life that has given me so much” – has been the guiding theme of his life. He noted that three different forces have brought him to where he is today: first, what he could do on his own; second, what others helped him to accomplish; and third, pure luck.

Gutierrez said he’s been a lucky man in that he had mentors all along the way, who “showed up when I need them.” He cited Raj Veeramani, executive director of the UW E-Business Institute and UW E-Business Consortium at UW-Madison, for encouraging him to enter academia. He also noted that bad luck, paradoxically, has been the main source of his learning and growth. “But you only learn from your mistakes when you have the courage and strength to see them as they are,” Gutierrez said. “That strength is not random, but a gift from life.” 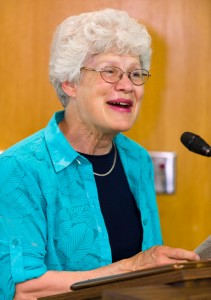 Regent Betty Womack presented the group award to UW-Madison’s Dictionary of American Regional English project, represented by Joan Houston Hall, who has directed the project for the past decade. Womack explained to the Board that the dictionary, which has been in the works for more than 50 years, is a multi-volume reference tool that records the thousands of words, phrases, and pronunciations that vary from one part of our country to another. “What is different about DARE is that it shows how and where people use the words, not only the language of our everyday lives but the expressions that our grandparents used but our children will never know,” Womack said. She noted that the New York Times has called DARE “one of the glories of contemporary American scholarship.”

In accepting the award, Hall told Regents that collaboration across a broad spectrum of contributors – including classified staff, students, and many, many volunteers – was necessary to “reach the letter Z.” She said they had always expected that linguists, librarians, historians, and teachers of American literature would be the primary users of the dictionary, but they’ve been “absolutely delighted” by how many other people love and use this work. A physician practicing in an unfamiliar area, for example, might benefit from DARE’s “translations” of terms. The doctor whose patient complained of “rifting” and having “jags” in his “leaders,” “That man needed DARE,” Hall said.

Hall noted that the DARE project recently contracted with Harvard University Press to produce a digital version of the dictionary to come out in 2013.  She closed by noting that it’s “difficult to bring all the parts together, but gratifying to know how many people care about their language.” 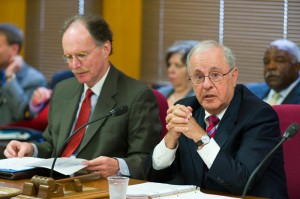 Regent President
Michael J. Spector chaired the Board meeting for the first time in July

Making his first report to the Board as President, Michael Spector reflected on the “unusual” nature of the past year for the UW System. “Since January, we have experienced, among other things, a dramatic, spirited, and intense debate about the future of the UW System, and the content of legislation that deeply affects the future of higher education in Wisconsin,” he said.

Against a new landscape that now includes long-sought leadership flexibilities and statutory changes, Spector said Regents will be involved in taking “renewed measure of what we do, how we do it, and why we do it.”

“We need to approach this process in an open-minded and questioning manner,” he said. “We can neither adhere stubbornly to the status quo just because that’s what we’re most familiar with, nor immediately embrace significant revisions of past practices or structures, based only on conclusory allegations of, for example, bureaucratic obstruction.”

He urged Regents to “play a meaningful and substantive part in ongoing discussions,” as a mandated legislative Task Force examines topics including the structure of UW System, tuition flexibility, and transfers.

As part of possible restructuring, Spector proposed that Regents consider adding three new standing committees to focus specifically on the unique interests of: (1) the two doctoral institutions; (2) the 11 comprehensive institutions; and (3) the UW Colleges and UW-Extension.

Regent Judy Crain said she is “very stimulated by this… I’m very heartened by the thinking that’s going on. It seems very appropriate.”

Regent Jeff Bartell also called it a “good idea,” and noted that chancellors and others have frequently expressed interest in having “a more direct route to Regent decision-making on some of their general issues.”

Regent José Vásquez said he is “intrigued,” but cautioned the Board to be mindful of the additional work load involved.

The Advisory Committee on the Role of UW System Administration, which he appointed in April, has already held three of its four meetings and is on track to submit its recommendations to him in August, Reilly said.

Regent Chuck Pruitt, chair of the Advisory Committee, told the Board the committee’s findings have “lots of interests and lots of interest.” “This is a balancing act between the introduction of new flexibilities and the commitment, through the Wisconsin Idea Partnership, to push down those flexibilities to the campuses, and to give chancellors and campus leadership the opportunity to be more entrepreneurial and use these new responsibilities in the most effective way possible to shape their universities. At the same time, we are also balancing leadership and accountability responsibilities that come with being a state land grant university.”

Regent Vice President Brent Smith, also on the Advisory Committee, pointed out that for the past six months, legislators and campuses have been told that the relationship between System and campuses would be reevaluated. “This commission is one of first steps to see if we are serious about what we’ve been representing, and it’s going to be very closely watched,” Smith said.

Reilly told the Board that he will include a copy of the Advisory Committee’s report when UW System submits its budget reduction plan to the Joint Committee on Finance and the Department of Administration by Sept. 1, as required by law. He added, however, that the overall report will be subject to review and approval by the full Board at its Sept. 8 meeting. 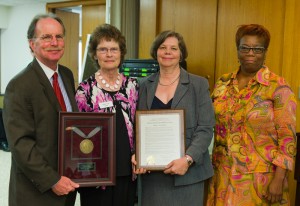 The Board unanimously approved a resolution of appreciation for Rebecca Martin, Senior Vice President for Academic Affairs. Martin is leaving UW System later this month to accept a position with the U.S. Education Delivery Institute in Washington, D.C.

Regent Judy Crain told the Board that the UW is stronger because of Martin’s leadership, citing Martin’s “vision, her commitment to the System’s priorities, her focus on what’s best for students, the strong belief that quality must be at the center of our decisions, and persistence on the priorities of diversity and inclusiveness.”

Recalling her years working with Martin on the Education Committee, Regent Danae Davis called Martin “a quiet leader…a compassionate and courageous leader…an effective architect of problem resolution…and (someone who is) decisive, willing to make the hard calls.”

Reilly said that Martin has been “somebody whose judgments you trust, commitments you share, and values you admire.”

Martin said that when she came to the UW System nine and a half years ago, she was looking for an opportunity to serve a university that was serious about three things: teaching and learning; diversity; and community engagement. “Many universities include these ideas in their mission statements and promotional materials; very few actually live them,” Martin said.

“What I did not know before I arrived in Wisconsin is that these principles, so important to me personally, were also deep values for this Board of Regents,” Martin said. She urged the Board to “maintain a clear focus on these values and priorities as you grapple with the challenges facing the UW System in the days ahead.”

In closed session, the Regents:

The UW System Board of Regents will hold its next meeting September 8, 2011, in Madison