University of Wisconsin System Board of Regents September Meeting, Day One News Summary

MADISON – The University of Wisconsin System Board of Regents reached out to legislators Thursday to find common ground regarding the state’s public higher education.

“We need to ‘reboot’ the longstanding partnership between Wisconsin and its public universities,” Regent President Michael Falbo said, in his opening remarks at the conference held on the UW-Madison campus. “We need to remember that we are all in this together, and we need to look at ways to strengthen that partnership.”

A crowd of about 200 attended Thursday’s conference, “Finding Common Ground: Regent Governance, Funding, and Partnerships for Wisconsin’s Public University System,” hosted by the Board of Regents.

“The model of a university operating high up in the ivory tower is increasingly archaic. It will not work anymore. We need legislators, business leaders, community leaders, governors, as partners who understand our challenges. Likewise, we want to understand what employers need from our graduates and what legislators expect from our institutions so we can prepare our students to be successful in their workplace,” Reed said.

He said universities also need to more frequently ask the question, “How are we doing?” of business leaders. “Workforce preparation has become more and more important, and we need to have partnerships with business leadership and the state,” Reed said.

Panel: Perspectives on Regent Governance and the UW System 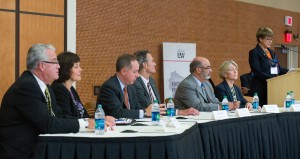 During a panel discussion on the role of regent governance and the UW System, legislators suggested changes may be ahead.

“I think we need to take a look at governance, and I believe the system needs to be driven by the campuses with the campuses driving what services the system provides,” said Sen. Sheila Harsdorf, R-River Falls.

Vos said he believes campuses need to be more nimble “where chancellors can truly be the chief executive officers.”

“Does the role of allowing faculty to make a huge number of decisions help the system or hurt the system?” Vos asked.

Rep. Janet Bewley, D-Ashland, said while she agrees with Vos and Harsdorf that there does need to be more cooperation and collaboration between UW System and legislators, she doesn’t agree in interfering with how the campuses operate.

“What I want to prevent is a whole new set of cooks going into your kitchen, people who are not academics trying to run your campuses,” she said. 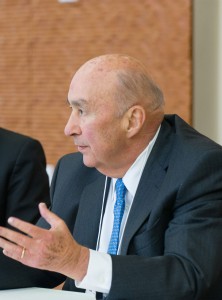 Looking back on his three decades as a system head, Reed  said that the best regents he’d worked with typically invested significant energy into developing relationships with legislators. “Legislatures have got to justify to the public what their expenditures are, so it’s important that legislators have confidence in board members,” he said.

Reed acknowledged that higher education is going through enormous changes, but added, “We have pushed the envelope on affordability about as far as we can. I don’t know how much further we can go to put that (tuition) burden on families, on student debt for the future.”

Reed suggested legislators need to look more at the longer-term impact of higher education.  “It’s to the state’s benefit for students to receive that education and enter the workforce and be better citizens. That’s what the state ought to be investing in,” Reed said.

Panel: Viewpoints on the Challenges of Funding Public Higher Education 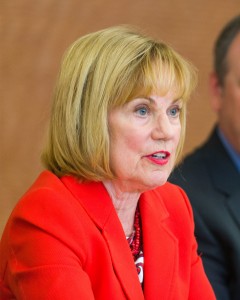 In the earlier panel, Rep. Vos suggested that the regents should have an independent agency to manage the system budget, similar to the way the Legislative Fiscal Bureau and Legislative Council advise the Assembly and Senate.

“I think the UW System needs to have a better handle on the financial management, so your accounting people give you information that is true, honest and sometimes hard to see,” Darling said.

Regent Gerald Whitburn cited pressures on the state to pay for other programs such as corrections and medical assistance, acknowledging that legislators must make difficult decisions about competing state interests, including higher education.

Rep. Pat Strachota, R-West Bend, said that colleges and universities must learn to work within that shifting financial landscape.

“As you look at the state as an opportunity for increased funding, really that is not a possibility at this point,” she said, adding that tuition increases have been allowed in the past but “you need to do a better job letting the legislature and public know what you’re doing with those tuition dollars,” she said.

Sen. Mark Miller, D-Monona, said the system should take the lead in putting together a non-partisan task force to look closely at the issue of rising higher education costs, and propose solutions.

“I would hope that we in Wisconsin could resurrect what we always hold up as the ideal, the Wisconsin Idea, and the universities and legislature and governor work together to solve problems,” he said.

Dialog: Next Steps in Building Partnerships to Address Regent Governance and Funding Challenges 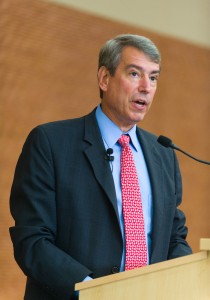 Wisconsin Technology Council President Tom Still, who facilitated one of the earlier panel discussions, noted that that the need to restore trust and credibility and the need for improved communications were recurring themes throughout the conference and must be heeded.

P.J. Hogan, Vice Chancellor for Governmental Relations at the University System of Maryland, another panel facilitator, emphasized the potential financial benefits of getting legislative buy-in on university initiatives.

UW-Madison chancellor emeritus David Ward reiterated the need to bring discussions of higher education funding policy and tuition decisions into the public space. “We simply let these things happen … Because it’s evolved by water torture rather than policy debate, we are struggling,” Ward said.

While noting funding models clearly have changed, Reilly pointed out that even those in higher education haven’t fully grasped all the implications of those changes.
“It’s not just the funding, it’s the core operation and delivery of the education that is so rapidly changing that it puts even more stress on the level of trust and communication,” Reilly said. 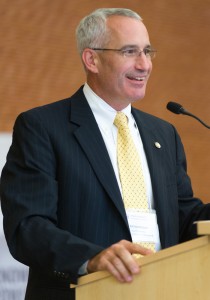 Regent President Falbo said the coming together of different parties at the conference is a start toward identifying some “common ground where we can work together to forge a strong future for Wisconsin.” He added that the Board will continue to align its work with the goals of the universities, colleges, and extension networks of the UW System.

“We will organize our administration in a way that strengthens the institutions, and enhances their service to students, families, businesses, and communities,” Falbo said. “In doing so, we will focus on effective resource management, high-quality education, and competitive compensation for the faculty and staff who deliver the goods.”
“Building upon today’s success, we will continue to advocate for all UW institutions, continuing the two-way conversation with all legislators,” Falbo said.