MILWAUKEE – The UW System Board of Regents today honored two individuals and one program as this year’s recipients of the Academic Staff Awards for Excellence, the System’s highest recognition for members of its academic staff.

“We are honored to help recognize the individuals and programs that have made our UW institutions second to none. Their outstanding work – along with the work of academic staff systemwide – helps to strengthen and invigorate not only our UW institutions but the communities in which they serve,” said Regent Janice Mueller, who chaired the award selection committee. Other Regents on the committee included Tracey Klein, Drew Petersen, and Bryan Steil.

Each June, the Board elects a President and Vice President. The UW System Board of Regents elected a new Board president:  John Robert Behling.  Regent Behling has served as the Vice President for the Board since 2015, and will begin his term as President immediately following today’s meeting.  At age 46, Behling is the youngest president- elect, as well as the first Board President from the Chippewa Valley. He succeeds current Regents’ President Regina Millner, whose term as president is ending.

The Board President designates Board committee membership, signs all diplomas and contracts issued by the Board, and speaks on behalf of the Board before the Governor and legislative groups.

The Board also elected Regent Drew Petersen as the new Vice President. Petersen is the Vice President of External Affairs and Corporate Communications for TDS Telecom (TDS), the seventh largest wireline telecommunications company in the United States, headquartered in Madison. Regent Petersen was appointed to the Board in 2013.

Chancellors Schmidt, Sandeen, Van Galen, Shields, and Ford spoke to the Board of Regents about the importance of a compensation increase for faculty and staff across UW System proposed by Governor Walker. The Chancellors highlighted the need to compete with other universities to recruit and maintain staff. Each Chancellor showed their appreciation for the Governor’s budget proposal, as well as the legislature’s willingness to reinvest in the hard-working faculty throughout the UW System.

“Compensation is our top priority,” Cross said. “Every legislator we have talked to is committed to providing an increase for our employees in the budget. This is a strong sign and a signal of support from the Legislature, and we are appreciative of that.”

Cross reiterated that UW System is different than other state agencies in that it historically pays 30% of any state pay plan.

“But our tuition has been frozen for four years and this budget proposes to continue that for an additional two years. Thus, the Board has asked the state to fully fund a pay plan for a 2% increase in each year of the biennium – just as it would for every other state agency,” Cross said.

Cross told Regents that UW System also continues to advocate for increased investment in campus infrastructure to renovate, remodel and maintain its existing buildings, noting that the plan submitted only impacts about 3% of its existing inventory.

“To remain competitive and to prepare our students to meet workforce demand, we need appropriate and up-to-date teaching and living spaces for our faculty and students,” he said.

Projects at UW-Milwaukee, UW-Whitewater and UW-Extension have already received formal support and efforts are ongoing to procure approval for additional institutional projects.

On the federal front, Cross provided a brief update on the report presented to the Board in March on the UW System’s 2018 federal priorities. In the wake of President Trump’s 2018 budget request released last month, Cross noted that the general consensus is there is not broad support in the House or the Senate for the budget as written, and it is expected to undergo substantial changes.

Nonetheless, several areas of proposed reductions are concerning, Cross said. No increase in the maximum Pell Grants are proposed, for the first time since 2012; the federal Perkins loan program is set to expire in September; significant cuts are slated to federal TRIO programs; and significant changes to student loan programs are proposed.

The federal budget also proposes cuts to federal departments and agencies that support research and development on UW campuses and nationwide.

“We all know research and development are critical to our economy, and while this work is primarily done at UW-Madison and UW-Milwaukee, all our UW institutions play an important part,” Cross said.

The proposed federal budget now heads to the U.S. House and Senate for consideration, where changes may occur. Cross told Regents that the UW System will continue to work with the Wisconsin delegation to make sure they have the information they need to prioritize federal spending that is in the best interest of the UW System, the state, and the nation.

President Millner’s Last Report to the Board

As part of her final regular report to the Board, outgoing Regent President Regina Millner told Regents that the Campus Climate Task Force, which she called into creation last year, is currently finalizing its report and recommendations, which will be presented to the Board at its July meeting.

Millner also offered some reflections on her tenure as president. She noted that higher education is sometimes characterized as an ivory tower, isolated, and out of touch. “In the University of Wisconsin System and the state of Wisconsin, nothing could be further from the truth,” Millner said.

Millner said the UW System is “powerfully engaged in finding and implementing solutions” to the key issues facing the state and the nation, adding that UW graduates “have the ability to think critically, to analyze information, to communicate effectively, to collaborate to meet a common goal, and to creatively solve problems – qualities that are highly sought-after skills in all fields.”

Further, she noted, “through ingenuity, resourcefulness, tenacity, courage, and old-fashioned hard work, we are moving ever closer to discoveries and inventions that will change people’s lives, and expand the horizons of what is possible.” This is the essence of the Wisconsin Idea.

As part of his regular report to the Board, President Cross announced the inaugural members of the UW System Diversity Council, created to help foster diversity and inclusion in Wisconsin. The Council is made up of a group of leaders in business, the community and other key organizations from around the state.

“I believe the Council’s connections to our communities will be key in helping our state prepare for an increasingly global world, where diversity and inclusion are both expected and valued in the workplace and in our communities,” Cross said.

The UW System will host a Dairy Summit on June 19, bringing together industry leaders as well as UW researchers to help identify key priorities for Wisconsin’s dairy industry, Cross said. The Dairy Summit is the first “Wisconsin Idea Summit,” a key initiative in the System’s 2020FWD plan.

Cross also told Regents that UW System announced recently its new IT industry-focused 1+3 program, in which students can complete their first year of college while still in high school. “What sets this program apart is that it not only targets the state’s business needs, but it partners with those businesses,” Cross said.  “Wisconsin is at a critical turning point:  we have an aging state population with a shrinking work force – and a decline in the state’s birth rate.  That means we are facing a workforce shortage in years to come, and we are working to address those concerns now,”

Cross noted that Governor Walker is enthusiastic about the program and its great potential to help the state’s workforce development. 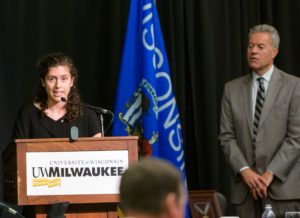 In his News Around the System report, Cross told Regents that UW-Platteville chemistry professor James Hamilton has received a grant from NASA to develop a telescope-cleaning polymer. With the help of students, Dr. Hamilton will develop a polymer system specifically for the special needs of NASA’s Starshade Telescope Project which will be launched in the next decade.

In his Student Spotlight feature, President Cross introduced Anne Barlas, a new graduate of the College of Engineering and Applied Science at UW-Milwaukee. 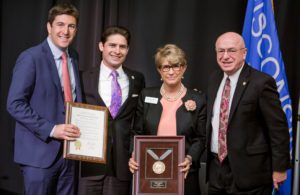 The Regents recognized the service and accomplishments of Student Regent Emeritus James Langnes III, whose term on the Board has concluded.  In his remarks to the Board, Langnes provided a moving tribute to his parents noting he had won two lotteries in life, “being born an American and being born of the two best parents in the world.”

Langnes noted that public service plays a large role for his family, and that it has been an honor and privilege to serve on the Board of Regents. Post-graduation, Langnes landed a job with Governor Walker’s office.

The next University of Wisconsin System Board of Regents meeting will be July 6-7, 2017, in Madison.