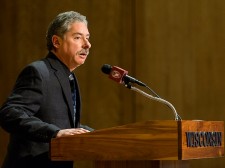 MADISON – The University of Wisconsin System Board of Regents honored the sixth annual winners of its Regents’ Diversity Awards today in Madison. The awards were established by the Board to recognize and support individuals and programs in the UW System that foster access and success in university life for historically underrepresented populations.

Regent John Drew, chair of the selection committee, said the awards are vitally important not only because it’s the socially just and fair thing to do, but it’s a Wisconsin thing to do. “Beyond that, our efforts are important because they recognize that we owe an education debt to those underrepresented minorities who have been systematically deprived of educational opportunities because of a legacy of racism and inequality,” Drew said. “Our efforts in this area are so crucial because Wisconsin does better as a whole when all of our people do better.” 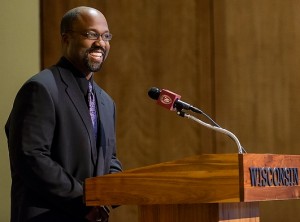 Regent José Vásquez, also on the awards selection committee, said he’s been asked why such awards for diversity were still given. “I wish I also could ask that question and say ‘enough’ – or ‘basta, no más,’” Vásquez said. “But until we don’t have Americans who judge other Americans because they look different, or speak differently, or because they are born elsewhere, that’s why we still need to do this.”

This year’s Diversity Awards winners are:

Haro, who came from an inner-city home and was the first in his family to go to college, said it was his own experience of being taken under the wing of several graduate students while in college that made the difference for him personally, and he continues to draw on that experience in his work.

“Mentorship is everything,” he said. “We have so many young faculty coming into our system. We’re lucky for that. They bring such ideas. To capture that, and harness that energy, to help our students of color along the way, please do whatever you can to continue that.”

Woods said he benefited enormously from having a mentor show him the way, while an undergraduate at University of California-Berkeley. “For many students, all they need is someone to say, ‘I’m going to help you figure this out,’” Woods said. “That’s what I try to do with everyone who comes into my office, especially those who may have some deficiencies in their background.”

He urged Regents to continue their efforts to encourage greater diversity on UW campuses. “It’s amazing what you can do when you have the support and the help from those that are claiming diversity is important,” Woods said. “I believe we can do better, and will do better.” 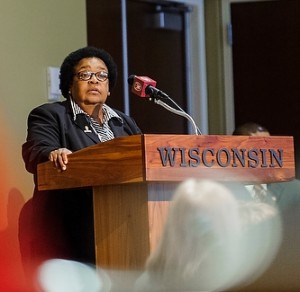 Jacqueline DeWalt, executive director of UW-Madison’s PEOPLE program, said the award is a testament not only to the excellence of the students and staff involved with the program, but also to the power of partnerships – with students, parents, K-12, faculty, staff, the business community, and more.

The charge that propelled the development of the program was two-fold, DeWalt said, and included the charge to work with children and their families early on to prepare them for higher education, and also to increase the number of students of color, from low-income families, and first-generation college students to apply and be accepted into UW-Madison.

“But this program is not just about preparing students to enter higher education. We are holding ourselves accountable to ensure that they successfully complete a higher education as well,” DeWalt said.

“The work of diversity, closing achievement and equity gaps, the work of infusing Inclusive Excellence as a standard benchmark in all that we do, requires that each and every one of us does our part,” DeWalt said. 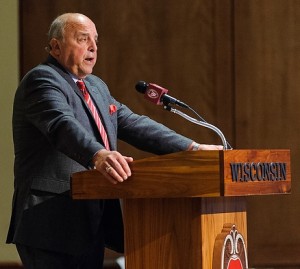 UW-Madison Director of Athletics Barry Alvarez said a message he shares with alumni around the country is that the program cannot become complacent with success.

“The easy thing to do is to think it’s automatic, but it’s hard to win. It’s hard to stay competitive. The moment you take it for granted is the moment it starts to slip,” Alvarez told the Board of Regents, as he delivered the program’s 2012-13 annual report. The Regents require all system schools that compete in Division 1 NCAA athletics to submit an annual report.

Alvarez said the 75 percent graduation rate for student athletes exceeds the Big Ten median of 74 percent, and the national Division 1 mark of 65 percent. He added that particular efforts are being placed toward graduating African-American student athletes at UW-Madison.

The athletic department ended the year with a positive fiscal balance, Alvarez reported. Its $108-million annual operating budget funds 23 sports played by nearly 900 student athletes, and the department has 600 employees, he said.

An economic impact study found that Badger athletics have an impact of $1 billion on the community, Alvarez said.

The UW-Madison program had no major NCAA violations in the past year, Alvarez said, though there were 20 secondary violations, the same as the previous year.

“With the regulatory environment as it is, no school that’s evaluating itself can go through a year without secondary violations,” Alvarez said. “It shows me that our people are responsible. If there is a secondary violation, they self-report.”

“We have an emphasis on doing things the right way,” he said.

Regent President Mike Falbo provided the Board with updates on the various searches currently underway, including the chancellor searches at UW-Stout and UW-Green Bay. Falbo said the goal is to present final names for those positions to the Board at its June meeting.

Interim UW System President Dick Telfer reported to Regents on the joint statement recently sent to President Obama and the U.S. Congress from Wisconsin’s higher education leaders. In a rare collaboration, he said, the chancellors and presidents of the UW System, the Wisconsin Technical College System, and the Wisconsin Association of Independent Colleges released an open letter indicating their united support of President Obama’s vision to once again make the United States the world leader in the percentage of its population with a postsecondary degree.

Telfer noted that the letter also expressed their shared deep concern, however, that proposals in the administration and Congress to create a Postsecondary Institution Ratings System (PIRS) could inadvertently undermine the achievement of that vision.

“It is rare for our three sectors to collaborate on a letter like this, but we felt it was important to register our shared commitment to access, affordability, and achievement, as well as our deep concerns with key elements of the President’s proposal,” Telfer said. “Because the Department of Education is gathering input on the construction of such a system, we considered it important to share our specific concerns through this open letter.”

As part of his report on news from around the UW System, Telfer noted that earlier this week, Dr. Satya Nadella – a UW-Milwaukee grad – had been named the new CEO of Microsoft. “In what now looks like a stroke of prescience, UWM presented Nadella with its Chancellor’s Innovator Award just last year,” Telfer said. 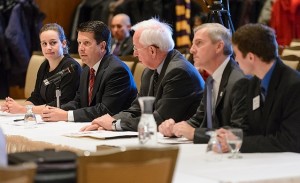 Two student recipients of Evans Scholarships joined leaders from the Western Golf Association, which administers the scholarships, to share their experiences with the Board.

Jacob Blatnik, of Waterford, and Dianne Kilgas, of Appleton, are among the 66 students currently attending UW-Madison on Chick Evans Caddie Scholarships, which provide full tuition and housing for student golf caddies.

“It is impossible to convey my passion for this scholarship. It has changed my life indefinitely,” said Kilgas, whose three siblings also earned Evans scholarships. She said that through her time spent as a golf caddie, she has learned value of hard work, listening to authority, and working as part of team. “I have been blessed to share time with the Evans family. Never before have I felt so close to a group of people as in Evans House,” she said.

Blatnik told Regents that the full Evans scholarship allowed him to attend UW-Madison despite significant family and financial hardships.

Jeff Harrison, WGA’s senior vice president of education, said the WGA is proud to have been part of the UW-Madison campus for over 60 years. He noted that the four-year graduation rate among Evans scholars at UW-Madison is 98 percent, with more than 900 Evans scholars graduating from the university since 1953.

The University of Wisconsin System Board of Regents will next meet on March 6, 2014,
at Van Hise Hall, in Madison.