Regents hear from author on how to promote college success, overcome challenges

EAU CLAIRE – America may have “gotten it” – realizing that the future success of our society depends on doing a better job at education at all levels – but the real prospect of long-term economic pressures will make that job extremely challenging. That was the message from author Michael McPherson in a presentation to the UW System Board of Regents on Friday.

“We cannot let ourselves believe that even a successful recovery is going to change the underlying fundamental reality that the fiscal state of the state government, of the nation, is in bad shape. We’re going to have to find ways to innovate … to open up sacred cows for discussion.  This is a decade-long, generational challenge,” said McPherson, co-author of a new book called “Crossing the Finish Line: Completing College at America’s Public Universities.” View 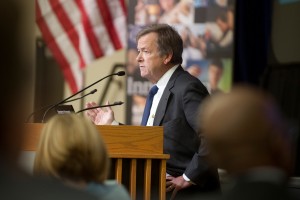 McPherson, a nationally known economist and current president of the Spencer Foundation, a Chicago-based educational research group, talked to the Board about the hurdles facing efforts to increase the number of college graduates in the United States.

In “Crossing the Finish Line,” which drew on extensive data from nearly 70 U.S. public universities, McPherson and his co-authors examine the effect of a variety of variables – including parental education, family income, race and gender, high school grades, test scores, financial aid, and characteristics of the universities attended – on retention and graduation rates.

Their data suggests that minority students and students from lower-income backgrounds have markedly lower graduation rates – and take longer to earn degrees – even when other variables are taken into account.

“If we are going to increase educational attainment, we have to address this disparity,” McPherson said.

In the UW System, currently 65% of students who enroll as freshmen graduate within six years.

To address the problem, students must get better advice on selecting a college.  Universities can and should do more collectively to help students understand the long-term importance of this decision, McPherson said.  A better grasp of what financial aid is available, and how to get it, is also a critical part of the process, he added.

For students from lower-income backgrounds, research indicates that the higher the net price of college, the lower the graduation rate. In the top income brackets, no such relationship exists. McPherson explained that “net price” equals the difference between tuition and financial aid, and that high-tuition colleges can compensate by offering higher aid. He emphasized that need-based aid is critical to student success.

McPherson told Regents that his research suggested that high school grades are a much better predictor of a student’s likelihood to earn a degree than the results of admissions tests like the SAT or ACT.

Regent President Chuck Pruitt updated the Board on a planned visit later this month that he and President Reilly will make to Washington, D.C., to meet with Wisconsin’s congressional delegation.  Among the subjects they hope to discuss, he said, will be the Student Aid and Fiscal Responsibility Act, legislation that is currently making its way through Congress. That legislation also provides new federal opportunities for “community colleges” nationwide, Pruitt said, and the UW System wants to ensure that its 13 freshman/sophomore UW Colleges are well-positioned to compete for the available funds.

The Washington trip will also be an opportunity to share information about the UW System’s Research to Jobs task force report that was presented to the Board last month, and other efforts underway to improve the process through which UW research translates into commercialized technology and new jobs.

President Reilly reported to the Board that preliminary data suggests that the UW System is on track to reach a record total headcount enrollment of more than 178,000 students across the UW System’s 26 campuses.

“Despite the very difficult economy, the overall enrollments at our institutions have not decreased – and in fact, have gone up,” Reilly said.

The new total would be an all-time high, and an increase of about 3,000 students from 2008. The data is currently not complete because campuses are still finalizing their numbers after the close of add/drop periods.  Reilly said that final figures and analysis will be brought before the Board once the “number crunching” is completed.

After conferring in closed session, the Regents re-convened in open session to elect Jane S. Radue as the new Secretary of the Board of Regents. Radue has served as the Assistant Director of UW System’s Office of Operations Review and Audit since 1998. In that role, she has studied a wide range of administrative and educational programs across the System. Radue earned her undergraduate and law degrees at UW-Madison, and is a member of the Wisconsin State Bar.  She will officially step into the new role on November 2, replacing Judith Temby, who will retire after 29 years with UW System Administration.

In other business, the full Board

The UW System Board of Regents will hold its next meeting December 10-11, 2009,
hosted by UW-Madison.