SUPERIOR – Members of the University of Wisconsin System Board of Regents heard wide praise for the accomplishments and potential of the UW-Superior campus during the second day of its October full board meeting.

Regent President Toby E. Marcovich, a resident of Superior and longtime supporter of the liberal arts campus, described how the UW-Superior campus is an “active part” of the lives of those who live in the greater Superior community and surrounding counties.

Marcovich noted that the UW-Superior campus takes a lead role in organizing “Superior Days,” one of the state’s oldest municipal lobbying efforts at the state Capitol. He also recognized the “top notch” athletic teams UW-Superior fields in Division III athletics, and praised the campus’ music department as “exceptional.” 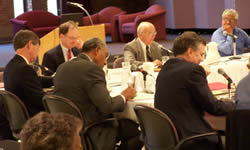 Regent President Marcovich (back, right from center) addresses the board at Friday’s meeting.

On behalf of those who work from UW-Superior as part of the coalition, Malladi thanked the board and the campus for strongly supporting the research program.

“We want to focus on UW-Superior as one of the premier security organizations in the nation,” Malladi said.

Reilly also noted that UW-Superior has worked with UW-Extension to create the UW’s first American Indian youth development specialist, who will lead recruitment and support services for current and potential American Indian students.

In addition, Reilly pointed out that UW-Superior has significantly improved its retention of students of color. Since 1997, he said, the retention rate of African American, American Indian, Asian American, and Hispanic American students improved 31 percent on the Superior campus. 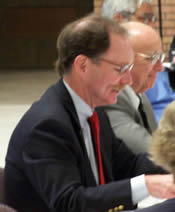 President Reilly addresses the Board of Regents

The board also heard from Roger Hansen, a member of the Chequamegon Bay Club of the UW- Madison Alumni Association, who asked the board to support efforts to position the region as a center for technology excellence.

Hansen told the board that the group is working with the Wisconsin Technology Council to establish a local chapter of the Wisconsin Innovation Network, and asked the board to support a local technology research park, which could thrive in the area with the skills and expertise at UW-Superior, Northland College and Wisconsin Indianhead Technical College.

Hansen asked the board to contribute related resources, such as expertise of the WiSys, an arm of the Wisconsin Alumni Research Foundation, which helps UW campuses develop and patent innovations from university research. UW System General Counsel Pat Brady confirmed that WiSys soon hopes to have more expertise in the area.

“That’s what WiSys is there for,” Brady said.

In closing, Regent Eileen Connolly-Keesler of Oshkosh introduced a resolution thanking Chancellor Julius Erlenbach and the UW-Superior campus for hosting the board’s meeting.

Read the resolution to UW-Superior

Board to hold listening session in Eau Claire, Oshkosh

The sessions will be a chance for Regents to seek public input on affordability; recruitment and retention of university faculty, staff and leadership; and the role of UW campuses in growing the state’s economy, Marcovich said.

UW-Superior’s Jim Dan Hill Libraryon Friday received the Governor’s Award for Archival Achievement for its work in preserving and organizing thousands of documents, photographs and books chronicling the maritime history of Lake Superior.

The award is given each year to a historical records repository that has made an outstanding contribution to the archival profession, or a notable achievement of value to the archives community, its patrons or constituents.

“We are honored to receive such a significant award, and feel that it reflects well on the work everyone is doing at Jim Dan Hill Library,” said Jacobs, who accepted the award during the second day of the Board of Regents meeting at UW-Superior. “We look forward to extending a warm welcome to the growing number of researchers who are accessing the maritime collection.”

The Lake Superior Marine Museum Association began the collection in 1973. Association board members transferred the collection to Jim Dan Hill Library in 2000 after concluding the more than 30,000 items could no longer be housed at the Canal Park Visitors Center in Duluth.

Gottlieb, deputy coordinator of the Historical Records Advisory Board and state archivist at the Wisconsin Historical Society, said the library performed a notable public service by making the collection accessible to everyone interested in Lake Superior history and ensuring the preservation of valuable historical documents.

The Lake Superior Maritime Collections Archives are available to the public at Jim Dan Hill Library on the UW-Superior campus.

Board honors Goldberg for service to UW System

Thanking him for his expertise in helping the university measure its progress, the board passed by acclamation a resolution honoring Frank Goldberg, UW System associate vice president for policy analysis and research, for his service to the university.

Goldberg will leave the UW System at the end of the month for a position at the University of Illinois-Chicago.

Regent and Education Committee chair Jose Olivieri of Milwaukee introduced the resolution of appreciation, saying he was grateful for Goldberg’s efforts to work closely with the Regents.

“I look to Frank as a person who tries to explain to me what the numbers mean,” Olivieri said. “I constantly go to him to learn and understand.”

Thanking the board, Goldberg said after his service at UW-Whitewater, UW-Milwaukee, and UW System, he leaves the state with an enhanced perspective.

“In all of those years, I’ve gotten such an appreciation for the role the system plays in the state,” Goldberg said.

Finally, the full board passed resolutions that:

The UW System Board of Regents will hold its next meeting Thursday and Friday, Nov. 4-5, on the UW-Madison campus.

WHEREAS, the members of the Board of Regents are pleased to have accepted the invitation to hold the board’s October 2004 meetings at the University of Wisconsin-Superior; and

WHEREAS, the board is more aware of the challenges and triumphs of the system’s northernmost campus following the presentation “The Evolution of Wisconsin’s Public Liberal Arts College,” an insightful and valuable UW-Superior retrospective; and

WHEREAS, the board again congratulates UW-Superior’s Jim Dan Hill Library for earning the Governor’s Award for Archival Achievement in recognition of its chronicle of the area’s maritime history; and

WHEREAS, board members learned a great deal during an enlightening trip aboard the research vessel “The L.L. Smith, Jr.”; and

WHEREAS, the board is grateful for the generous hospitality extended by Chancellor Julius Erlenbach and his staff, and wishes the entire UW-Superior community well as it continues to build upon the $13 million already pledged in the ambitious and successful “Campaign Superior”;

BE IT THEREFORE RESOLVED that the Board of Regents hereby thanks the University of Wisconsin-Superior for an encouraging, informative and truly superior experience.

WHEREAS, Frank Goldberg has served the UW System with distinction as Associate Vice President for Policy Analysis and Research for 6 ½ years, working as a valued and respected colleague with all sectors of the university;  and

WHEREAS, Frank has been a leader in the UW System and in higher education nationwide in pioneering the development of useful measures of accountability, helping the UW System demonstrate its progress through systemwide and institution-specific Accountability Reports; and

WHEREAS, Goldberg ably met numerous requests to share his expertise, especially related to guiding valuable Board of Regents’ discussions about the importance of student access and maintaining a quality university system; and

WHEREAS, Goldberg has been a vital contributor to EM-21, the UW System’s enrollment management plan to ensure high access for Wisconsin students, while better serving adult and non-traditional students statewide; and

WHEREAS, Frank has inspired many UW System colleagues in Van Hise Hall by walking up and down 15 flights of stairs several times a day; and

WHEREAS, Goldberg has helped the UW System greatly improve its ability to serve students, families, elected officials and state citizens in the spirit of the Wisconsin Idea;

BE IT THEREFORE RESOLVED that the Board of Regents of the University of Wisconsin System highly commends and thanks Frank Goldberg for his dependable service and visionary contributions to the state of Wisconsin and the UW System, and wishes him well in his continued career as Vice Provost for Resource Planning and Management at the University of Illinois-Chicago.

Toby E. Marcovich
President of the UW Board of Regents
Superior, Wisconsin
This Eighth Day of October
Two Thousand and Four