Board: Salaries necessary to recruit and retain faculty and staff

MADISON — Highlighting the dramatic disparity in compensation for University of Wisconsin System employees vs. their peers, the Board of Regents on Friday recommended that the state approve additional compensation for UW System faculty, staff and academic leaders in the next budget biennium.

“I hope we have realized that it is disastrous to let people fall behind,” said Regent Mark Bradley of Wausau.

The full board approved a measure informing the state Office of Employment Relations and the Legislature’s Joint Committee on Employee Relations (JCOER) that a total pay plan increase of 5 percent in each year of the 2005-07 biennium is necessary to move university employees closer to salaries in the national market. Those state entities are responsible for recommending that state funding be approved for use in a university pay plan.

The resolution approved Friday recommends an additional 2 percent pay plan increase in each year of the 2005-07 biennium for faculty, academic staff and university senior executives. This increase, coupled with the recommendation the Regents included in their biennial budget request, would bring the total pay plan increase to 5 percent.

The board did not adjust tuition levels at its Friday meeting.

“I feel like it’s our responsibility to tell [the state] what it will take,” Student Regent Beth Richlen said in explaining her vote to approve the recommendation. “This is not a tuition increase now. And if it were, I probably wouldn’t vote for it, even though our faculty deserve it.”

Regent Roger Axtell of Janesville said the pay plan, which also includes a recommendation that domestic partnership benefits be offered to university employees, is vitally important to recruiting and retaining high-quality faculty.

“There is no doubt that there are compounding and negative implications when we lose faculty,” Axtell said.

Following statutory requirements, the board also approved new salary ranges and salaries for seven chancellors who would have be paid below the legal minimum allowed by those ranges. The new salary amounts, effective Nov. 1, will cost a total of $57,000, and will be funded from existing campus budgets without using student tuition dollars.

Following a discussion about the effects of budget cuts to UW campuses, Bradley noted that despite cuts, the chancellors were able to educate even more students in the last biennium.

“I commend every one [of our chancellors] who keep the doors open and keeps this place going,” Bradley said.

The regents amended the measure to remove consideration of increasing the salary ranges of two UW System vice presidents, but agreed in principle to revisit the measure in February 2005.

The board also approved a resolution, championed by Richlen, reaffirming the board’s commitment to the 2005-07 budget request it submitted to the state in October. That proposal includes a major “hold harmless” financial aid package, and a 4.3 percent tuition increase, if the state grants a 7.2 percent increase in state support, per the traditional split.

All board votes on Friday followed a demonstration by approximately 30

UW-Madison students attended Friday’s board meeting to voice their priorities for the university.

UW-Madison students, who attended the meeting to urge the regents to consider student needs and concerns as part of their pay plan discussions, and to advocate for students in future discussions with the Governor.

“If you want to give salaries, we should first think about the faculty and [teaching assistants], so students can actually get the classes they need,” said student Lauren Woods.

Regent President Toby Marcovich of Superior noted that the board well understood the points the students came to make, but that they should also direct their comments to the Governor and the Legislature, which are responsible for allocating state funding to the UW System. He added that the board’s 2005-07 budget request would add 300 teaching positions within the system.

“You’re talking to people who are trying to give you the best education we can, based on the amount of money we have to work with,” Marcovich said.

Research and development activities taking place at Wisconsin colleges, universities and affiliates contribute an economic impact of $883 million to Wisconsin’s economy each year, gaining ground on the impact of similar activities in the industrial sector, the board learned on Friday.

In addition, 36 jobs are created in the state for every $1 million spent on academic R&D – an impact that could be lost if the state does not invest in public higher education, said Tom Still, president of the Wisconsin Technology Council, during his presentation.

“As the students just described, you see here at the university a clash of priorities and a clash of resources,” Still said. “All of this does back to the fact that Wisconsin needs a growing economy to make sure all of these priorities are supported.”

Nearly $700 million of the total academic research and development spending in the state takes place at UW System institutions, and the bulk of that share at UW-Madison, the system’s flagship research university.

Still said the UW System has the long-term infrastructure and talent to remain a national research powerhouse, but that the state has been falling behind other Big Ten states in terms of spending on public higher education. Such state investment is necessary to leverage federal and private research funding, he said.

“If trends continue, we will have no state university of a privatized university by 2040,” Still said. “If infrastructure is not kept up, it means R&D dollars are less likely to come here. to bring the things we all want – create jobs and solve problems.”

“Over time, it is potentially a threat to what is happening here,” he said. “If California decides to go on a shopping trip, guess where they’re going to go for the talent?”

Regent Brent Smith of La Crosse asked Still how a Taxpayer’s Bill of Rights might affect the university’s ability to adapt to such changes.

“Personally, while we all want to see public dollars managed and spending kept in check, TABOR seems to be a one-size-fits-all. I don’t believe TABOR’s the answer,” Still said.

Regent Vice President David Walsh of Madison said that Still’s presentation underscored the importance of state investment in the UW System, not just for students, but for the benefit of the state’s economy as a whole.

Still added that WiSys, the arm of UW-Madison’s Wisconsin Alumni Research Foundation that works to bring discoveries from other UW System campuses to the marketplace, is important to spreading the research strength across the system. He cited the example of UW-Milwaukee, where researchers have submitted many proposals for consideration by industry since WiSys was created.

Regent Bradley said Still’s findings were directly related to the level of passion the Regents heard from students on Friday, as well as from university community members at listening sessions around the state.

“It’s all a part of one big problem-the systematic disinvestment in higher education,” he said.

UW System faculty across the state are participating in exactly the kinds of academic research and development that contribute so much to Wisconsin, UW System President Kevin P. Reilly told the board Friday.

Reilly introduced three professors who told their board about their research advances.

Dr. James Cook, an expert in medicinal chemistry and University Distinguished Professor at UW-Milwaukee, explained that technologies from his team’s study of anxiety-reducing could mean major financial benefits for the UW System.

Through WiSys, Cook is in talks with pharmaceutical companies about bringing to market potential medications that could treat patients with panic and post-traumatic stress disorders, or even obsessive-compulsive disorder – without the side effects of similar drugs currently on the market. Patent and licensing through WiSys would return much of the profits to the UWM campus.

Importantly, Cook said, his team has attracted $2.4 million in external funding from the National Institutes of Health in just the last five years. The program has also supported 25 jobs for research assistants in that time – all primarily with external funding.

Cook said while his research could prove vitally important, he remains committed to education as a primary mission.

“What I’m more proud of is that there are 60 students who have done undergraduate research in my laboratory,” Cook said. “I look at my research group as a baseball team. My job is to educate them. [The board’s] job is to keep the bat in their hand.” 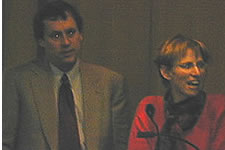 Raines said their individual research labs on campus support more than 40 jobs, and their company, Quintessence Biosciences, supports another 10 jobs at the University Research Park. Further, their cancer-fighting developments patented through the Wisconsin Alumni Research Foundation, which helps to return profits back to the Madison campus.

Kiessling said she first came to UW-Madison as a student, and stays here as a professor because of the opportunities on campus and commitment to quality.

“The quality of the science and interactions at the university were things that drew me here, and things I’m really committed to maintain,” she said.

Kiessling said many of their graduates leave the state, at very high starting salaries, she noted, because there aren’t pharmaceutical or biosciences companies in the state where they can work.

She added that Quintessence has turned down potential investors because they would have had to relocate the company out of state.

Regent Chuck Pruitt shared with the board an update about the progress of a UW System committee working to increase the number of bachelor’s degree holders in the state, another factor Reilly said greatly contributes to Wisconsin’s economy.

Pruitt said the Committee on Baccalaureate Expansion has been working with the Wisconsin Technical College System to achieve the common goal of producing more college graduates in the state. The committee will complete its work on Monday, (Nov. 8), The committee is recommending that the two systems create a new bachelor’s degree in applied science or general studies, which would allow holders of a two-year WTCS degree to take “capstone” liberal arts courses and complete the four-year bachelor’s degree, Pruitt said.

He acknowledged the work of fellow Regents Smith, Axtell and Connolly-Keesler in furthering the committee’s study. The board will hear a complete report about COBE and credit transfer in December.

Reilly also shared “good news” items from around the UW System, and granted “emerita” status to Nancy Westrum, who retired Friday after serving as executive assistant to the President of the UW System for 40 years.

More than 150 people attended listening sessions held by the Board of Regents last month, and more than 60 shared their thoughts on several UW System priorities, Regent President Toby E. Marcovich reported to the board Friday.

“At both Eau Claire and Oshkosh, we heard public input on three key issues currently challenging the UW System,” Marcovich said, “affordability, the economic development role of the university and its campuses, and our ability to recruit and retain quality faculty and staff.”

Specifically, Marcovich said the members heard the public say that:

In other business, the board approved resolutions to:

The Board of Regents will hold its December meeting Dec. 9-10 on the UW-Madison campus.