University of Wisconsin System Board of Regents August Meeting, Day One News Summary

OSHKOSH, Wis. – The University of Wisconsin System Board of Regents  unanimously  approved the UW System’s 2015-17 biennial operating budget request at its meeting Thursday in Oshkosh.

Regent John Behling called it “a tremendous budget proposal,” but queried how forwarding the UW’s request would reconcile with the Governor’s previous statement that state agencies should expect flat funding.

“I think it is an investment in the future of this state. Period,” said President Cross. “We’re proposing to play a major role in helping to focus the energy of the (UW) System to meet the needs of the state and to align our resources to help meet those needs because we think that is the best way to improve this economy. I welcome the opportunity to engage in that conversation.”

Regent Vice President Regina Millner expressed her support for the proposed budget. “There are only a few government agencies with the capacity to grow the state’s economy. We’re one of them,” Millner said. “I’m hoping that the legislature can understand this is in state’s best interest.” 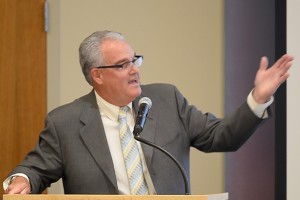 UW-Oshkosh puts on a show

UW-Oshkosh Chancellor Rick Wells, who is retiring at the end of August, made his final appearance before the Board to lead a presentation, “We’re in This Chancellorship Together.”

“We won’t become a great institution until we do something about continuing to enhance the quality of education that all undergraduates receive here,” Wells said. He closed by making a final pitch for improved faculty and staff compensation. “If our faculty and staff don’t feel fully respected, appreciated, engaged, supported, and empowered to do all the things that we’re asking them to do on behalf of our students … then it’s hard for us to become an ever-better institution,” he said.

The host campus also made presentations to four standing committees: 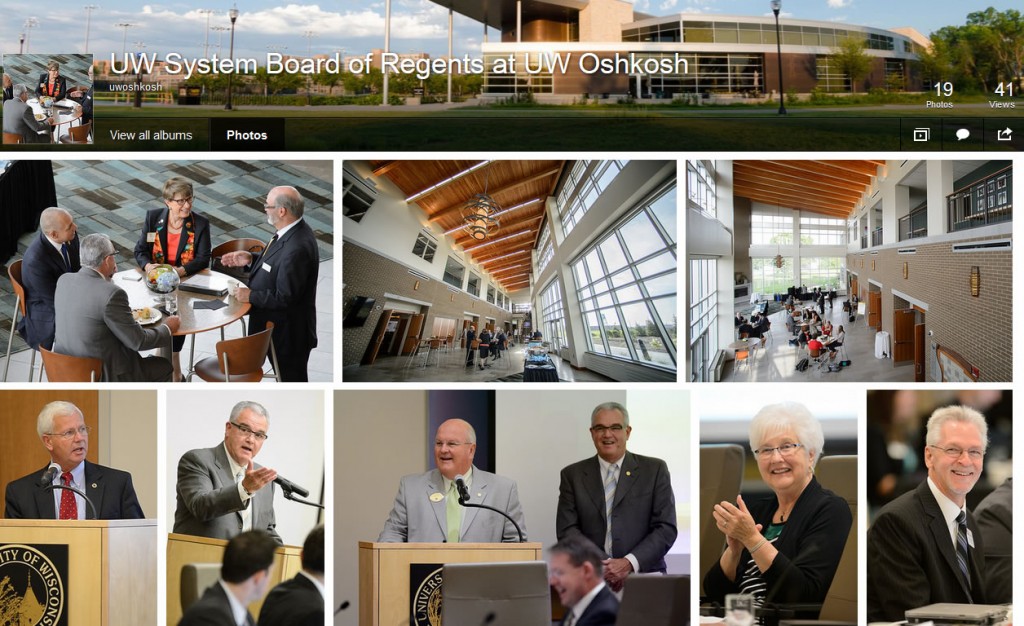 Significant progress has been made by UW institutions in ensuring greater access and more success for underrepresented student populations, but much work remains to be done, according to a preliminary report presented to the full Board.

Vicki Washington, associate vice president in the Office of Inclusivity, Diversity, Equity and Student Success, told Regents that maintaining a robust workforce within the state will be dependent on the university’s ability to educate more students from diverse backgrounds. “Our pursuit of greater diversity is also in line with our mission as an institution of higher education,” she said.

An in-depth update on the status of the campuses’ progress towards meeting top Inclusive Excellence goals will be presented in October.

Steve Wildeck, vice chancellor for administration and finance, UW Colleges and UW-Extension, and former interim vice president for finance, UW System, provided a summary of the report issued by the consultants PricewaterhouseCoopers (PwC), and UW System’s plan to address recommendations related to Human Resource System (HRS) internal controls. Wildeck said the System has embraced the LAB and PwC recommendations and believes that these have strengthened internal control security and created a strong work plan going forward.

Regent Tim Higgins, chair of the REDI Committee, led a discussion regarding the endorsement and rollout of two new REDI initiatives introduced earlier this year. The initiatives include capacity-building research block grants for all campuses as well as a Regent Scholar program designed to provide grants to individuals and departments that foster excellence and best-practices with collaboration involving faculty, students, and the business community.

Associate Vice President Alex Roe reported that most buildings at UW-Platteville damaged by the EF-2 tornadoes of June 16 are slated to be repaired and ready for the start of fall classes. It’s estimated that 12,000 man-hours of labor have been involved in the restoration efforts. UW-Platteville will be presenting a more in-depth report at Friday’s meeting of the full Board.

Roe also reported that the Department of Administration has retained an independent consultant to assess the state-owned heating and cooling plants … properties and that consultant has been in contact with all institutions potentially affected. Roe reported that there are no defined plans to date regarding these facilities.

David Ward, interim senior vice president for academic and student affairs, briefly reported on systemwide action plans and policy reviews related to developmental/remedial education. Noting that UW System has conducted five major studies of remedial education since 1971, Ward told the Committee that provosts from all UW institutions are actively engaged in the System’s ongoing efforts to reduce the demand for remedial education and increase the success of remedial education.  President Cross is expected to make an announcement on the issue at Friday’s meeting.

In his report, Senior Vice President for Administration David Miller told the Committee that a number of efforts are underway, or soon to be underway, that will benchmark financial system costs, enhance internal controls, and improve analytical reporting functions. These actions will enhance the efficiency and effectiveness of UW System operations.

All resolutions approved by Committees will go before the full Board for final approval on Friday.