The Board of Regents meets in Madison for its July 2017 meeting.

MADISON – The University of Wisconsin System Board of Regents voted to approve a $6.2 billion annual operating budget for 2017-18 at its meeting Thursday in Madison.

In introducing the budget, UW System President Ray Cross reiterated the need to consider the value students derive from a high-quality college experience, and whether the UW’s colleges and universities have the resources they need to deliver a first-class education that prepares students for success in work and life.

“Also critically important are the broader benefits that all of Wisconsin derives from having an educated workforce and citizenry,” Cross said. “For that, we want to ensure UW institutions retain a robust capacity to serve as an economic engine for the state.” 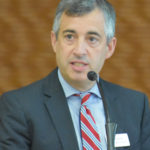 Vice President for Finance Sean Nelson also noted that the Joint Committee on Finance had previously approved a $5.7-million increase in Wisconsin Grant funding for UW students – the first state financial aid increase since 2010-11. This funding goes to the Wisconsin Higher Educational Aids Board, not the UW System.

With international awareness and preparation for the global environment identified as key initiatives in 2020FWD, the UW System’s strategic framework, UW-Oshkosh Provost Lane Earns led a full-Board discussion of the diverse and growing international education opportunities in the System. 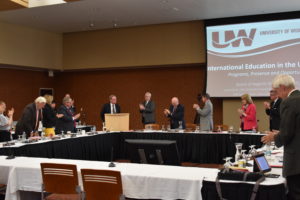 Earns’ presentation addressed the importance of international education, examples of partnership opportunities, information about existing umbrella agreement frameworks in the UW System, and an update on international investments in Wisconsin by potential partners.

More than 9,000 international students – representing 132 different countries – were enrolled in the UW System in 2015-16. At the same time, 14.2% of all undergraduate bachelor degree recipients participated in study abroad or an exchange program.

Regent Mark Tyler drew from the experience of his own company, OEM Fabricators in Woodville, to note that a decade ago, he might have chuckled at the notion of their doing international business. “But now,” he said, “there are a dozen companies internationally that we work with regularly. The world is getting smaller … and there are some huge opportunities out there.”

The Capital Planning and Budget Committee approved UW-Stevens Point’s request for authority to construct the $16.8 million DeBot Dining Center Renovation project to address building infrastructure, life safety and programmatic issues. The mechanical systems will be renovated, a new fire sprinkler system will be installed, entrances will be reconfigured and improvements will be made to optimize the delivery of dining services.

Jim Henderson, Vice President for Academic and Student Affairs, previewed five initiatives that the Office of Academic and Student Affairs will address in the coming year. They include: (1) Development of an outcomes-based funding formula for UW System institutions, as directed by the Joint Finance Committee of the Wisconsin Legislature; (2) Continuing efforts to revise math courses for incoming students, particularly as related to student assessment, student placement, and course delivery; (3) Developing predictive analytics to positively impact student success, especially in advising, enrollment management, and academic programs; (4) Review of the UW System Policy on Monitoring Low-Degree-Producing Academic Degree Programs; and (5) Increasing the efficiency of the transfer process.

As part of a semi-annual report on the status of nine large IT projects underway in the UW System, the Business and Finance Committee heard that all projects are currently deemed to be on target with respect to scope, and budget. These projects include the Oracle/PeopleSoft Human Capital Management Application Upgrade; Budgeting, Planning, and Forecasting System; UW-Stevens Point Implementation of Oracle/PeopleSoft Campus Solutions; Replacement of the Interactive Reporting Tool; UW Colleges/UW Extension Voice-over Internet Protocol; UW-Madison Voice-over Internet Protocol; Oracle Shared Financial System Application Upgrade; UW-Madison Canvas Transition; and the UW System Digital Learning Environment.