MILWAUKEE – The University of Wisconsin System Board of Regents unanimously approved a resolution directing UW System President Kevin P. Reilly to request a salary increase for all UW System employees no less than that provided all other state employees for each year of the 2013-15 biennium funded through the state compensation reserve.

“We need to speak with the strongest and most unified voice from this board that we recognize the critical nature of the situation facing us,” said Regent John Drew.

The resolution further stated that the Board intends to return to JCOER to request the use of institutional funds for supplemental pay plans during the 2013-15 biennium for UW System institutions to address the significant compensation gap. Currently, UW faculty salaries are about 18% lower than salaries at competing colleges and universities.

Several Regents spoke in support of the resolution.

Regent David Walsh said that going forward, there must be complete collaboration with all the university’s stakeholders and the importance of quality maintained. “The problem with quality is, often you don’t know you’ve lost it,” he said. To have high quality, he added, there has to be adequate resources.

Regent Regina Millner added, “We need to send a message to all faculty that we appreciate what they’re doing, understand their concerns, and support the strength not only of the System as a whole but also the people that make up the personnel in that system.” 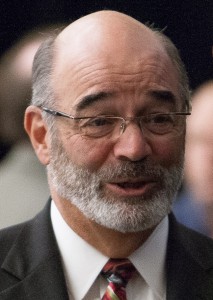 Regent Michael J. Falbo of Franklin was elected President of the Board of Regents, and Regent Regina Millner of Madison was elected to serve as Vice President.

Falbo, who was first appointed to the Board in 2004, has served as Vice President for the past year. He succeeds Regent Brent Smith in the leadership post.

In nominating Falbo, Regent Ed Manydeeds recalled that when he first joined the Board, Falbo was “instrumental in helping me understand the inner workings of what we do here.”

Taken together, he said that Falbo’s experience and personal attributes make him “someone that we need at this time. He described Falbo as “someone who has the firepower to help us understand issues, someone with compassion, someone who can balance his life, personally and professionally…and can help us balance things here moving forward.”

Following the election, Falbo said: “I think we have some work to do. I’d like to see us become more engaged and effective in supporting the work of our chancellors and campuses…I think our overriding goal needs to helping them achieve their goals.” 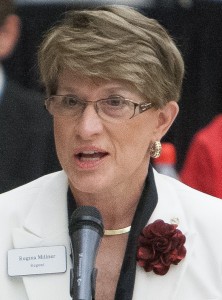 “We need to continue to support and advocate for our campuses, and actively planning with them in mind is an important part of that support.”

Regent Tim Higgins nominated Regent Millner to the vice president’s position, observing that she “brings to the table a wealth of experience, a history of community involvement, and a history of service to the university.” Student Regent Tracy Hribar said Millner has served as a role model and mentor. Regent David Walsh cited Millner’s “interest, enthusiasm, responsibility, and willingness to be objective.” 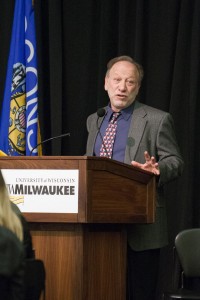 “The students of the UW System are blessed to be taught by some of the best teachers in the world, and today, we honor the best of the best,” said Regent Chuck Pruitt, who chaired the selection committee. “But when we do so, we also acknowledge that they did not get here alone… These winners stand on the shoulders of 9,800 supremely dedicated faculty and teaching staff across the University of Wisconsin. While their work is extraordinary, it is not unusual. When it comes to teaching excellence, these are not the exceptions, they are the examples.”

Others on the selection committee were Regents Katherine Pointer, Gary Roberts, and Mark Tyler.

Regent Pointer introduced the first winner, Professor Christopher Coe, whose scholarly interests are in the area of health psychology and behavioral medicine. For 25 years, Coe has taught the highly popular Psychology 450, “Animal Behavior – The Primates,” where students ponder how the behavior and biology of our closest animal relatives can inform understanding of the human condition. Pointer, who is a student at UW-Madison, said she’s heard friends and others rave about this professor. 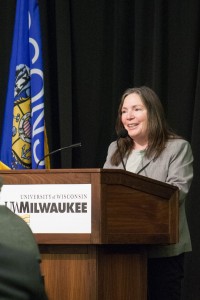 Coe told Regents that what can be learned from understanding animals is an increasingly important issue. He also touted the value of “biological literacy and being better consumers of scientific information.” Coe noted that the Board has had experience in recent years dealing with the concerns and skepticism over animal research, and one facet of his class is now devoted to the value and ethics of that research.

Regent Pruitt presented the second individual award to Professor Peggy James. He told Regents that James, a member of the UW-Parkside faculty since 1988, is a two-time winner of Parkside’s teaching award. Her teaching philosophy is focused on attaining wisdom rather than knowledge, Pruitt said, and she is a strong believer in developing students’ sense of citizenship. He added that for many years, James co-directed the Center for International Studies and has led many student service learning tours.

James told Regents she was proud to receive the Board’s recognition, adding, “I’ve always said good teaching can only take place with good students, students who are committed and engaged. But I also realize good teachers need other good teachers to learn from, to work with, to lean on. No one is alone in an educational environment and I have to say I’m surrounded at UW-Parkside by amazing teachers.” She said her goal is to help students find a balance of hands, mind, and heart. 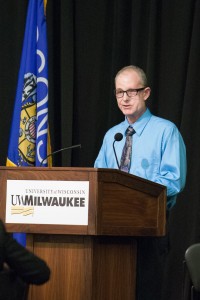 Regent Roberts recognized the outstanding teaching of a department or program in presenting the Regents’ Award to the Biology Department at UW-La Crosse, represented by its chair, Professor David Howard. In describing the scope of the department’s impact on campus, Roberts noted that more than one in 10 undergraduates at UW-La Crosse currently majors in biology. He added that the biology department has developed a model of collaborative teaching that improves student learning at every level, and it provides campus, state, and national leadership in the scholarship of teaching and learning.

Howard thanked the Board for sponsoring the teaching excellence awards, noting that “Positive acknowledgements are kind of rare in higher education.” He told Regents that members of the biology department always address decisions “by first asking, ‘will this help students learn, will this help students advance their careers better.’ Basically, it comes down to the fact that everyone in the department loves working with students.” He added that the support of UW-L’s administration has been crucial in helping the department achieve its goals.

Board recognizes service of colleagues

The Regents presented certificates of commendation to two colleagues in recognition of their service: Michael Morgan and Gilles Bousquet.

In recognizing Michael Morgan, who has served the past three years as UW System’s Senior Vice President of Administration and Fiscal Affairs, Regent Chuck Pruitt called Morgan “the right man at the right time.” Noting his intelligence, integrity, wit, and wise counsel, Pruitt said Morgan’s “legacy will be felt by students, faculty and staff for many years to come.”

Regent Ed Manydeeds commended Gilles Bousquet, who served this past year as Interim Chancellor at UW-Eau Claire. “He immediately stepped up and established working relationships with students, faculty, and staff,” Manydeeds said. “He is truly admired in our city and has done a great job for the campus.”

The UW System Board of Regents will hold its next meeting July 11-12, 2013, in Van Hise Hall, Madison