MADISON – As part of approving a $2.2 billion annual operating budget, the University of Wisconsin Board of Regents on Thursday set tuition for the 2009-10 academic year, agreeing to a 5.5 percent tuition increase for most undergraduate students.  Only one Regent voted against the budget, which maintains the same rate of tuition increase as the Board approved in the past two years.

The Board also froze tuition at the UW Colleges for the third year in a row, leaving it at 2006-07 levels.

“At a time like this, when so many are feeling squeezed by the global economic troubles, we would love to have no tuition increase at all. In reality, however, that is not an option. It is simply not possible to maintain the quality of our academic programs, the quality of our university experience, without raising tuition – particularly in the face of ongoing declines in state support,” said UW System President Kevin P. Reilly.

“Still, I am proud that in recent years we have been largely successful in keeping our tuition increases relatively modest,” Reilly said.

Regent President Charles Pruitt told the Board that students, faculty, and staff will all feel some impact of the challenging economic times.  “We will need to ask them once again to hang in there in the hopes of better days ahead,” Pruitt said.

Pruitt reiterated, however, that the UW will bounce back from these hard times. “We sincerely hope and believe that our willingness to work with our partners in state government and to do our part now will be recognized, and that when times improve, resources will become available,” he said. “We all agree that the University of Wisconsin is and will be part of the solution.”

With the 5.5 percent increase at the four-year UW schools, tuition at UW-Madison would rise by a total of $617 for the coming academic year. That total includes the 5.5 percent general tuition increase of $367, plus the $250 differential for the Madison Initiative for Undergraduates.

Rates at UW-Milwaukee will grow by $359 annually, and general tuition increases at the 11 other four-year UW campuses will grow by about $280 annually.

“Access, affordability and academic excellence have been the cornerstones of the University of Wisconsin promise to the people of this state, and that’s a commitment we want to uphold,” Reilly said.

Reilly reiterated that the tuition increase will not spare UW institutions from having to do things they don’t want to do.  But he commended the UW institutions for their diligence in managing the challenges laid before them, and for their continued dedication to the advancement of the university’s educational mission.

Regent Eileen Connolly-Keesler said she was actually “relieved” at the proposed rate of increase. “I thought the tuition increase would be more than 5.5%, and I think we should pass it,” she said.

Regent Tom Loftus noted that the University and every other arm of State government will be affected by scarce resources. “It’s always hard to pass a state budget – in a recession it’s almost impossible.  Demand for state services goes up at the same time revenues go down.”

In supporting the proposed tuition hike, Regent Judy Crain said “A difficult balance has been struck. It’s not just a matter of quality education, but also a question of access, and the number of places there are for students.”

Student Regent Kevin Opgenorth, from UW-Platteville, said he thought the 5.5 percent tuition hike was “reasonable,” but felt compelled to vote against the motion out of concern that students were getting “priced out” of higher education.

Regent Aaron Wingad, a student at UW-Eau Claire, said he decided to support the tuition increase in the end because it balanced the need for maintaining quality while spreading the burden across the system.  “It’s the responsible way to move the System forward,” he said.

The Regents welcomed two new Board members: Tony Evers and Stan Davis.  Evers, who earned his bachelor’s, master’s, and doctoral degrees from UW-Madison, is the new State Superintendent of Public Instruction. He succeeds Elizabeth Burmaster.  Davis is the newly-elected president of the Wisconsin Technical College System Board.  He is a partner at Axley Brynelson in Madison, where he serves as co-chair of the Government Relations Group.  Prior to joining the law firm, he served as the Governor’s Deputy Chief of Staff and Chief Legal Counsel.  Davis, who received his bachelor’s degree from UW-La Crosse and his JD from George Washington University Law School, succeeds Regent Mary Cuene. 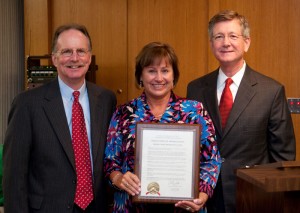 In presenting a resolution of appreciation for Regent Cuene, Regent Mark Bradley commended Cuene for “always encouraging students to do more and do better.”

Cuene, who was herself a returning adult student when she earned her bachelor’s degree at UW-Green Bay, urged Regents to continue to support options for learners, and to keep those options affordable, relevant, and non-duplicative. “It’s more important than ever before to advance public education opportunities for all learners in Wisconsin,” she said. 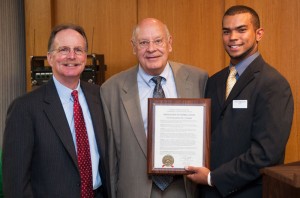 In recognizing Chancellor Markee, who is retiring after more than 13 years as chancellor, Regent Kevin Opgenorth, a called him “a genuine student-centered chancellor.”

Markee, who noted that he’s been involved with the UW System for 25 years as a student, professor, and chancellor, called the entire experience “a real pleasure.”

President Reilly informed the Board that he has named Markee Chancellor Emeritus at UW-Platteville.

“You took over at a challenging and interesting time and led that institution with great energy and dedication,” Regents President Charles Pruitt said.

Earns will return to his position as the UW-Oshkosh Provost.

The Regents devoted the morning to a policy discussion focused on how best to continue addressing the state’s emerging workforce development needs during a time of budgetary constraints.

Reilly reminded Regents that the UW is the “preeminent player” in the state’s academic research and development arena — a $1.1 billion industry in Wisconsin that directly and indirectly drove the creation of more than 38,000 Wisconsin jobs last year.

“That’s something we should be very proud of. But we can – and must – do more,” Reilly said.

JoAnna Richard, Deputy Secretary of Workforce Development, spoke to the Board on Wisconsin’s immediate and projected workforce needs and the strategies in place to address them.

At a time when only 29 percent of Wisconsin workers age 26 and older have a four-year college degree or more, Richard said a significant number of current and new jobs are increasingly dependent on rising skill and knowledge levels that require a post-secondary degree.

A 2008 report by the Wisconsin Department of Workforce Development found that 6 of the 10 occupations with the highest demand for employees in Wisconsin through 2016 will require a bachelor’s or master’s degree.

“There are some great opportunities for the University here,” Richard said.

Kim Kindschi, Director of the Division of Entrepreneurship & Economic Development at UW-Extension, described Extension’s work to support and develop small business and entrepreneurship through the Wisconsin Entrepreneurs’ Network, the Small Business Development Centers, and other specialty centers.

“Demand for our services is probably at an all-time high right now,” Kindschi said. “Given all the economic uncertainties that we’re facing, we seem to be at the right place and right time to provide these services. We are certainly increasing access and building expertise to improve the economic volume and quality of life in Wisconsin.”

Carl Gulbrandsen, Managing Director of the Wisconsin Alumni Research Foundation and Chair of President Reilly’s Research to Jobs Task Force, presented to the Board an overview of WARF, WiSys, and the task force’s work.

The UW System Board of Regents will hold its next meeting Sept. 10-11
on the UW-Whitewater campus.