Building upon months of collaboration between the University of Wisconsin System and the Wisconsin Technical College System, the UW System Board of Regents approved updated credit transfer policies on Friday (May 7) at the conclusion of its May meeting.

The changes, approved unanimously, will:

The regents delayed action on the approval to Friday’s meeting to ensure that students transferring to UW institutions from UW Colleges and WTCS institutions would receive equal treatment with regard to how courses transfer and fulfill requirements.

“I believe we’ve accomplished what was reflected in the resolution we passed months ago,” said Regent Jose Olivieri of Milwaukee, who has been closely following the issue.Regent Gregory Gracz of Milwaukee commended Olivieri’s continued efforts to watch over the updates to credit transfer policies within the UW System.

In recognition of their significant contributions to the economic development and quality of life in Wisconsin, the board on Friday honored 100 UW faculty and staff members named as the system’s first “Wisconsin Idea Fellows.”

“This is an opportunity for the president and the board to recognize people who make extraordinary public service contributions to the state,” Axtell said. “And, just as important, it’s a means of calling the attention of the public, government and business leaders to these UW experts who can serve as resources for them to help achieve job growth.”

The fellows were nominated by the president and chancellors of the UW System’s 15 institutions. The president and the board intend to award the designation to 100 new Wisconsin Idea Fellows each year. The designation “fellow” —  an honorary title in higher education applying to both men and women — is purely honorary and carries no additional salary or stipend.

Axtell noted the work of several Wisconsin Idea Fellows, including Jan Gallagher of UW-La Crosse and UW-Extension, who advises businesses in seven western Wisconsin counties; Larry Cox, who directs the Weinert Center for Entrepreneurship at UW-Madison; and William Gregory, dean of the Engineering School at UW-Milwaukee, who, with his son, just launched a new company, NovaScan, which will develop products to improve detection and diagnosis of breast cancer.

“We will continue, but we want to do more,” Axtell said.

The UW System’s biennial budget request for the 2005-07 state budget cycle could include several items that stem from the regents study of the university’s future, titled “Charting a New Course for the UW System,” Freda Harris, UW System vice president for budget and planning, told the board on Friday.

“The university is striving to maximize its positive impact on the state’s economic growth,” Harris said. “It all begins with students.”

The request could also help further Gov. Jim Doyle’s Grow Wisconsin plan, which seeks to grow a high-end economy for the state, by educating citizens who can earn higher incomes, contribute to the state’s workforce and help attract new companies to Wisconsin.

One recommendation would ask the state to restore 300 faculty positions to the UW System in 2005-07, Harris said. The UW System has lost more than 600 faculty in the past decade, yet at the same time, has increased enrollment by more than 9,000 students. Restoring the faculty positions, which would cost an estimated $38.7 million in state funding, would allow improved student-faculty contact and could increase retention and graduation rates, yielding additional graduates eligible to work in Wisconsin, Harris said.

Another recommendation, from the Educational Quality Working Group, would seek to move faculty salaries in line with peer levels. Nationally, salaries at public universities increased 2.1 percent in 2003-04, while the state of Wisconsin approved a 0 percent pay plan for university employees in 2003-04 and a 1 percent pay plan in 2004-05, Harris said. To avoid a staffing crisis, maintain instructional quality, and help close the UW System’s 6 percent salary gap, the university may request an estimated $80 million in state funding.

The UW System’s two-year budget request could also include $10.6 million in funding to support technology and library infrastructure and programming.

Harris noted that the recommendations would align with the priorities of the United Council of UW Students and follow recommendations the board heard in March about financial aid, recruitment and retention.

The board is expected to begin reviewing the UW System’s 2005-07 budget request at its June meeting.

The season of commencements is beginning, and students now entering the workforce have been shaped by their time at UW institutions, UW System President Katharine C. Lyall said in her report to the board.

“The true measure of our work is not known for many years, maybe generations, but we know from introspection on our own lives the important, even critical, difference education makes,” Lyall said.

Lyall noted that the system is expected to graduate more than 29,000 students in the current academic year, among them approximately 580 nurses, 3,600 new teachers, 100 pharmacists, 140 doctors and 1,600 engineers.

On a related note, Lyall recognized the transition in leadership of the United Council of UW Students. She thanked outgoing President Jeff Pertl for his work in continuing a strong collaboration between the group and the system, and welcomed president-elect Stephanie Hilton to the post.

Pertl thanked the board for their thoughtful deliberations, and urged them to remember that students are not “products” or “consumers,” but rather contributing stakeholders in the future of the university.

“We don’t want to lose the soul of what this university is about,” he said.

Pertl urged the board to support efforts to provide sufficient financial aid for students and to protect student dollars from use in areas for which they were not intended, such as the use of auxiliary funds to pay for financial aid in the last state budget, in their continued dialogue with students and the Legislature.

“No singular idea will transform this university today,” Pertl said. “The game is offense, and we need to be in it.”

Read President Lyall’s remarks to the board

Citizens around the state marked “UW Spirit Day” on Friday by wearing campus colors or a “spirit badge” to showcase their connections to the UW System, Regent President Toby Marcovich of Superior told the board. 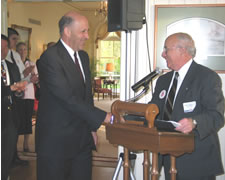 Gov. Jim Doyle (left) thanks Regent President Toby Marcovich for his remarks at a reception on Thursday in honor of the UW System’s contributions toward the state’s economic development.

The statewide event was the culmination of “UW Spirit Week,” proclaimed by Gov. Jim Doyle at a ceremony Monday where he was joined by alumni, university representatives, President Lyall, and UW-Parkside’s Ranger Bear and UW-Madison’s Bucky Badger, he said.

“UW Spirit Week” was an opportunity for alumni, students, faculty, staff, parents and friends to celebrate their campus allegiances and help show that the UW System makes contributions in every community and business in Wisconsin.

Marcovich also thanked Doyle for hosting a reception on Thursday to recognize the university’s contributions to economic development.“I think it symbolized our commitment to help “Grow Wisconsin,” Marcovich said. “It was impressive to look around the room and see business leaders, campus leaders and our faculty and staff members who are all working together in their local regions to enhance business development, grow jobs and restore Wisconsin’s economic vitality.”

Marcovich also updated the board on what he said was an “historic event” – Thursday’s joint hearing of the Senate and Assembly committees that oversee higher education and the University of Wisconsin System.

Marcovich said the regents and chancellors in attendance were able to update the legislators on the Charting study and discuss the effects of recent budget cuts.“We had a good dialogue with legislators and while they expressed concerns on a range of issues from financial aid to brain gain, I came away feeling that they are strong supporters of our campuses and our students,” Marcovich said. “Much more ground unites us than divides us.”

Read President Marcovich’s remarks to the board

Read testimony to the Joint Senate and Assembly committees pdf

Board approves budget increase for Camp Randall renovations, other construction

The board on Friday approved a resolution that asks the UW-Madison Athletic Department to contribute additional private funding to lower the costs of a $7.8 million increase in the budget for renovations to Camp Randall Stadium.

The additional funding, which would be paid for through program revenues, was necessary to cover higher-than expected construction costs, Gracz reported to the board. He noted that he felt it was appropriate to ask the department to raise as much as $3.9 million in private funds to help reduce the costs because the project has been brought to the board for changes multiple times.

Noting that he would vote for the action to keep the project on track, Regent Guy Gottschalk of Wisconsin Rapids moved to remove the fundraising requirement from the resolution. Gottschalk said he felt it was not the board’s place to place conditions on the use of private donations and was concerned the amendment would set a troubling precedent.

“It’s not our money,” Gottschalk said. “I’m afraid this could have a dampening effect on philanthropy throughout this system.”

UW-Madison associate vice chancellor Alan Fish said the Athletic Department would follow through on the fundraising to the extent possible.

The committee also approved resolutions to:

The Board of Regents will hold its next meeting on June 9 and 10, 2004, on the UW-Milwaukee campus.

WHEREAS, thousands of faculty and staff of the University of Wisconsin System serve the citizens of the state daily by providing their talents, time and expertise beyond the classroom in countless ways, performing public service throughout the state; and

WHEREAS, through this work, the University of Wisconsin plays a central role in the economic vitality of the state as well as its quality of life; and

WHEREAS, the Board of Regents wishes to acknowledge and encourage such activity and to make the connections between UW faculty and staff and the communities, non-profits and businesses that they serve much more visible; and

WHEREAS, in the spirit of “Engage Wisconsin,” we want to call the attention of the public, government and business leaders to UW experts who can serve as resources for them and help encourage job growth in the state;

NOW THEREFORE BE IT RESOLVED THAT the University of Wisconsin Board of Regents establishes “The Wisconsin Idea Fellows Program” to recognize and honor the faculty and staff who are contributing to their communities and to the state;

AND BE IT FURTHER RESOLVED THAT the Board directs the UW System President and Chancellors to advance to the Board each spring the names of faculty and staff to receive the honorary title “Wisconsin Idea Fellow” for the following academic year.