MADISON – The University of Wisconsin System Board of Regents approved today a proposal to restructure UW Colleges and UW-Extension, joining the 13 two-year campuses with four-year comprehensive and research institutions. UW-Extension divisions will be joined within UW-Madison and UW System Administration.

“This proposal empowers us to meet the challenges we face while upholding the UW System’s longstanding commitment to provide wide access to affordable, quality higher education for all Wisconsin residents,” said UW System President Ray Cross. “Restructuring the UW Colleges will help us to meet the current and future needs of our students, the State of Wisconsin, and its people, and keep Wisconsin moving forward.”

“With enrollment declines up to 40%, the Board needed to take action. I believe the proposal President Cross put forward is both timely and effective,” said Regent President John Robert Behling. “Ray and his leadership team have proposed a path forward to serve students and communities more effectively. Our chancellors have stepped up to the challenge, and I applaud all of our institutions for embracing reform.”

Cross cited demographics, enrollment, and access as the key reasons for putting forth the proposal. By 2040, nearly 95% of Wisconsin’s total population growth will be age 65 and older. Conversely, those age 18-64 – the traditional workforce — will only grow about 1%. Wisconsin will have fewer working-age adults, and more will need to be college-educated.

Prior to taking a vote, the Board heard testimony from representatives of shared government, county governments and chambers of commerce, and eight chancellors.

Stephen Beers of UW-Extension, representing the UW System’s academic staff, said “We foresee opportunities ahead as long as each entity (in the restructuring) retains a meaningful identity.”

Dr. Holly Hassel of UW Colleges, speaking for faculty, urged the Board to continue to uphold the UW Colleges’ longstanding mission of open access and serving the needs of local communities.

Nick Webber, a student at UW-Eau Claire, told Regents that students want to take an active part in discussions about restructuring. “We want to be part of it,” he said.

Paul Farrow, the County Executive for Waukesha County, called the proposal “an opportunity to change the dynamics of how education is brought forth in Wisconsin.”

Brad Karger, chief administrative officer for Marathon County, pointed to the UW Colleges as a place of hope and opportunity for students who may be first-generation college students or placebound.

Cathy Sandeen, Chancellor of UW Colleges and UW-Extension, said she supported the restructuring proposal and urged Regents to keep students at the center of their attention. “These are Wisconsinites with a dream of a UW degree. They are people who may be fragile, skittish, one problem away from dropping out. They require a high level of learning support,” she said.

There was broad support from other chancellors for the proposal, with most expressing excitement about the new opportunities ahead, and their interest in connecting with new partners.

In a lengthy discussion, most Regents agreed that the urgent nature of the demographic and financial challenges supported taking action on the restructuring proposal without additional delay.

“This is a decision that has to be made. You change before you have to,” said Regent Robert Atwell.

Regent Gerald Whitburn, pointing to the 51% decline in enrollment at UW-Marathon County, said, “It’s time for us to step up.”

“Most important, it’s the right thing to do for our students – full steam ahead,” added Regent Bryan Steil.

Having received the Board’s approval, Cross will now move forward with convening a steering committee to oversee the planning and implementation of the proposal. The committee will be comprised of representatives from UW System Administration, UW Colleges and UW-Extension, and each of the other UW institutions directly involved in the restructuring. Shared governance groups will be integral to the process; the steering committee will seek input from the faculty, staff and student representatives designated by each governance group.

Behling charged Cross with providing progress reports on the restructuring plans and implementation process at the next six Board meetings, running through August 2018. 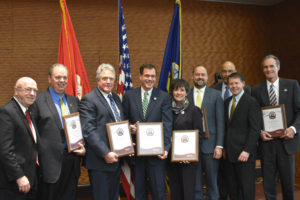 To be certified, a campus must go above and beyond in providing a wide range of critical supportive services, including counseling, a welcoming campus environment, and giving student veterans a voice in university life.

“We are regularly recognized as providing veteran benefits that are among the most comprehensive in the nation,” said Cross, a U.S. Army veteran who served in Vietnam. “The UW VETS program helps to publicly salute an institution’s commitment … all with the larger goal of making their education experience more accessible, affordable and successful.”

Cross noted that all four-year institutions in the UW System are now VETS-certified. “That’s something we can be very proud of,” he said. 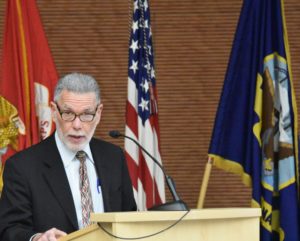 Malcolm Brett, director of Broadcast and Media Innovations with UW-Extension, led a presentation to celebrate the 100th anniversary of Wisconsin Public Broadcasting.

Brett told Regents that the mission of Wisconsin Public Broadcasting is to educate, inform, engage, entertain, and inspire everyone in Wisconsin. “We have connected the university and the world beyond to the front parlor and the milking parlor,” he said. “Our passion for the Wisconsin Idea is driven by the audience’s needs.

Brett noted that while Wisconsin Public Radio began with a broadcast in a small laboratory to a single home, Wisconsin Public Broadcasting now serves more than 500,000 listeners and 500,000 viewers.

“We are mindful of our legacy but focused on the future,” Brett said.

Cross commended Brett for his 34 years of outstanding service to public broadcasting in Wisconsin and beyond. Brett has announced his retirement next spring.

In his regular report to the Board, President Cross updated Regents on several key legislative initiatives the UW System is tracking on the state level, including a bill that is being introduced to enact many of the capital flexibilities the UW System had sought as part of its 2017-19 budget request.

Other legislation being followed includes bills addressing enhanced operational authority for the Board in capital budget and planning, proposals to reform and update the administrative rules governing the UW System, and legislation to update accountability and reporting requirements to eliminate outdated reports.

On the federal front, Cross noted that proposed federal tax reforms could impact public colleges and universities both directly and indirectly and the UW System will be working closely with Wisconsin’s congressional delegation to deliver positive change. The Tax Cuts and Job Act introduced by House Republicans consolidates three tax credits that taxpayers may claim for credit for postsecondary expenses: the American Opportunity Tax Credit, the Lifetime Learning Credit, and the Hope Scholarship Credit. Among other impacts, the bill would also repeal the current student loan interest deduction.

In his report on news from around the UW System, Cross told Regents that UW-Superior’s Lake Superior Research Institute recently celebrated its 50th anniversary. Alexandra Cousteau, granddaughter of Jacques Cousteau, spoke about the importance of water conservation at the event. 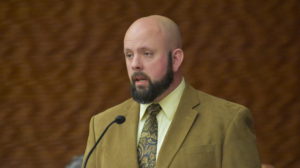 In his Student Spotlight feature, President Cross introduced Aaron Kloss, a senior at UW-Oshkosh majoring in social work. Kloss served nearly 17 years in the Wisconsin Army National Guard, including three tours of duty in Iraq, before retiring this past June. He started his university experience at UW-Oshkosh 15 years after graduating from high school.

Kloss said he realized after becoming a husband and father that he wanted more out of life, but he had been wary about college. He said when he learned that the barriers he worried might keep him from going to school were not really there, “that made it a real easy choice for me to come back.”

He commended the support provided to veteran students at UW-Oshkosh, “their inclusion and support and being able to be with people who think like I think and live like I do.”

Kloss, who will graduate in May, has accepted a position in the registrar’s office at UW-Oshkosh where he hopes to help other student veterans have the same positive university experience he has had.

Responding to requirements in the 2017-19 state budget, the Business and Finance Committee approved revisions to policies regarding segregated fees to ensure classifications of allocable and non-allocable are consistent across institutions.

The next meeting of the University of Wisconsin System Board of Regents will be December 7-8, 2017, in Madison.