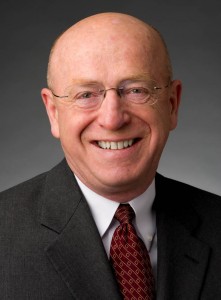 The UW System Board of Regents today approved Cross’s appointment, following the recommendation made by a selection committee.  Cross plans to step into the new leadership post in mid-February.

“Our colleges, universities, and extension networks are the pride of Wisconsin and the envy of the nation,” Cross said. “I’m eager to work with the Regents and all my UW System colleagues to enhance these assets in ways that will benefit the entire state, in keeping with the richest traditions of The Wisconsin Idea. That involves strong two-way relationships and open, honest communication – bringing the resources of the university to the people of Wisconsin, while also bringing the problems of the people to the university.  To do that, we have to be really good listeners – not just good lecturers,” said Cross.

“As we look at the mission of the UW System and the role of our central administration, we must consistently add value to the work being done by our talented faculty and staff statewide. We must explain the impact of their work and the effectiveness of our administration in terms that people will easily understand. We will seek out collaborations and efficiencies that serve the public good, and demonstrate that we are a part of – not apart from – what makes Wisconsin great,” said Cross.

Cross has led UW Colleges and UW-Extension since 2011. In that role, he has been responsible for the academic, financial, development, and administrative aspects of both statewide institutions. One of the highlights of his tenure has been the development and launch of the innovative UW Flexible Option.

“Chancellor Cross has a deep understanding of the opportunities and challenges that face both the University of Wisconsin System and higher education in general,” said Regent President Michael J. Falbo, who chaired the selection committee. “He brings both outside perspective and inside expertise. He has led one of our largest UW institutions, so he knows how things work, and I am confident that he will hit the ground running. At the same time, the majority of his experience is elsewhere, so he brings fresh insights and many innovative ideas. He has been a faculty member, a small business owner, a consultant, and higher education leader. He has an impressive record of success leading single institutions, multi-campus institutions, and statewide extension programs. Together with his character and knowledge, these experiences uniquely qualify him to lead the UW System as it evolves to meet the needs of those it serves.

“Ray has what it takes to help us continue building the framework in which diverse UW institutions can collaborate, differentiate, and thrive,” Falbo said.

Prior to coming to Wisconsin, Cross served as president of Morrisville State College, a residential agriculture and technology college of the State University of New York (SUNY). He has also served as president of Northwest Technical College in Bemidji, Minn., and was a department head and a professor at Ferris State University in Big Rapids, Mich.

In addition to his career in academia, Cross has experience in the private sector as a design engineer, small-business owner and consultant to business, industry and government. From 1967-70, Cross served with the U.S. Army and was awarded four medals for his service in Vietnam.

“The high caliber of the our applicants is a testament to the UW System’s enduring, strong reputation, and Chancellor Cross rose to the top of that pool,” said Regent Vice President Regina Millner, who chaired the search and screen Committee. “Ray’s personal leadership style blends well-honed diplomatic skills with a quiet toughness. He is well prepared to help us confront many of the challenges facing higher education institutions across the nation.”

Cross will be the UW System’s seventh president, succeeding Kevin P. Reilly, who stepped out of the office last month to advise the American Council on Education (ACE) and return to teaching. UW-Whitewater Chancellor Richard J. Telfer stepped in as interim president on January 1, and will continue serving in that role until Cross takes office.

In line with market-based compensation guidelines approved by the Board of Regents in October, Cross will earn $525,000 as president.  Cross said he intends to create a new need-based scholarship fund for students at UW Colleges and UW-Extension.

Ray lives in Fitchburg with his wife, Miriam. They have four children and five grandchildren.

For more information about Cross and the search process, see http://www.uwsa.edu/presidential-search.

For information about the UW System, see wisconsin.edu.